Tiger Nest Monastery, officially known as Paro Taktsang,  is the most surreal and holy Buddhist temple complex in the “Land of the Thunder Dragon”. A short drive from Paro through magnificent emerald hills and gurgling streams takes you to the base of the monastery.

This divine monastery is perched precariously on a  sheer cliff at a dizzying 10,000 feet above sea level. Local legends state that Guru Rinpoche popularly known as Padmasambhava flew to the site on the back of a tigress to slay a demon and thus the name.

Guru Padmasambhava is believed to have spent 3 years, 3 months, and 3 days meditating in a cave that still exists inside the monastery and can be accessed through a narrow hole by visitors. Though the site has existed as a cave for meditation for hundreds of years, the temple complex, as well as the monastery as it exists in its present form, was built in the year 1692. 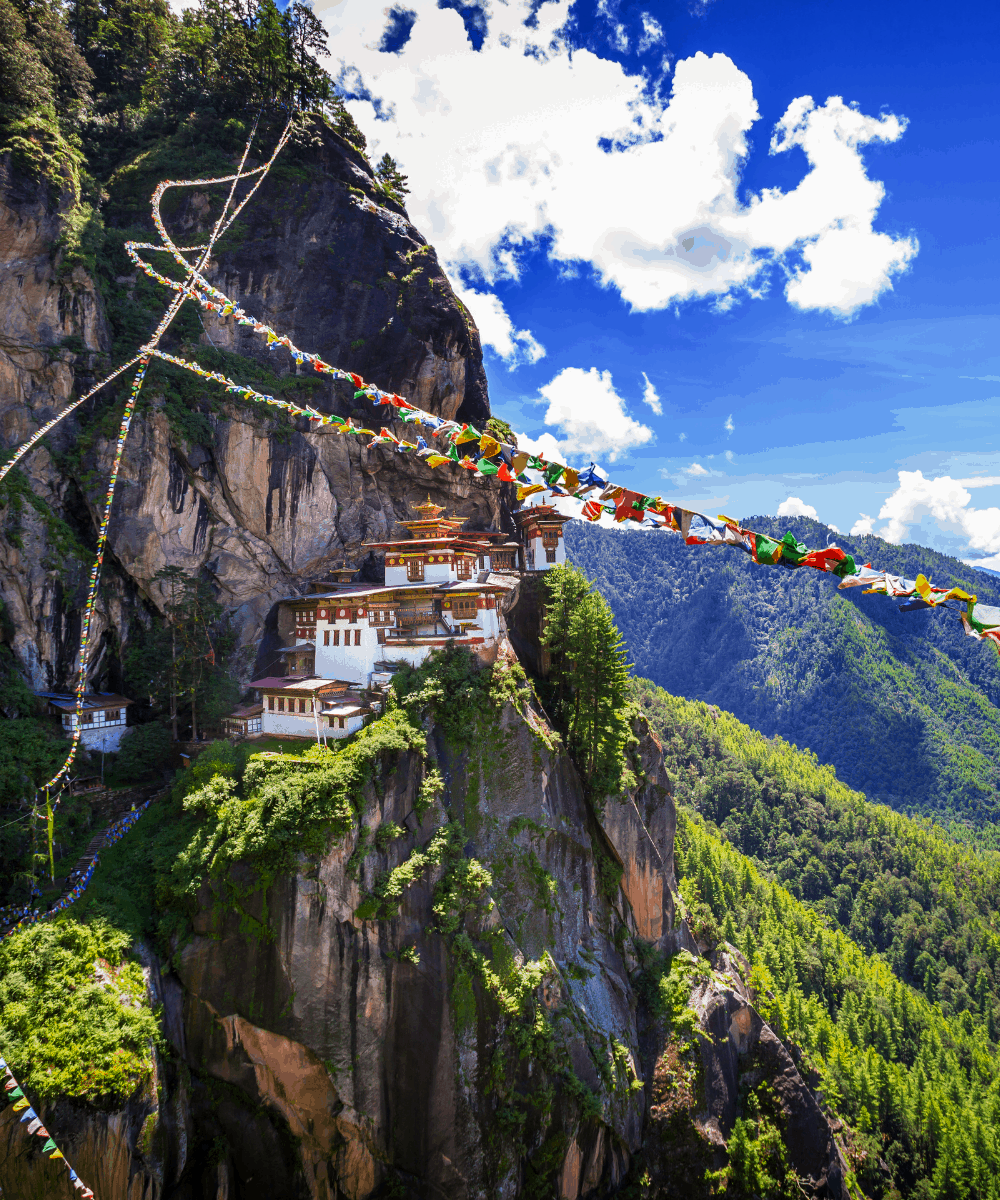 A fire devastated the monastery in the year 1998 and it was painstakingly rebuilt by devoted volunteers who had to carry material on ponies and their backs as there is no other way to take things up.

The trek to this awe-inspiring monastery takes you through densely forested hills full of mesmerizing wildflowers and provides breathtaking views of the valley below. Rock hew steps, both descending and ascending numbering almost 1000 need to be tackled before you reach this sanguine monastery that is considered the birthplace of Buddhism in Bhutan.

Words cannot capture the mystical and sublime sensation that one experiences at this place. While it is a pilgrimage site for followers of the Buddhist faith, most tourists enjoy the trek through lush pine and rhododendron covered hills and consider it an endurance test. Whatever the reason may be, this trek is indeed a memorable one and for many, it is a once in a lifetime opportunity so enjoy every step of it. 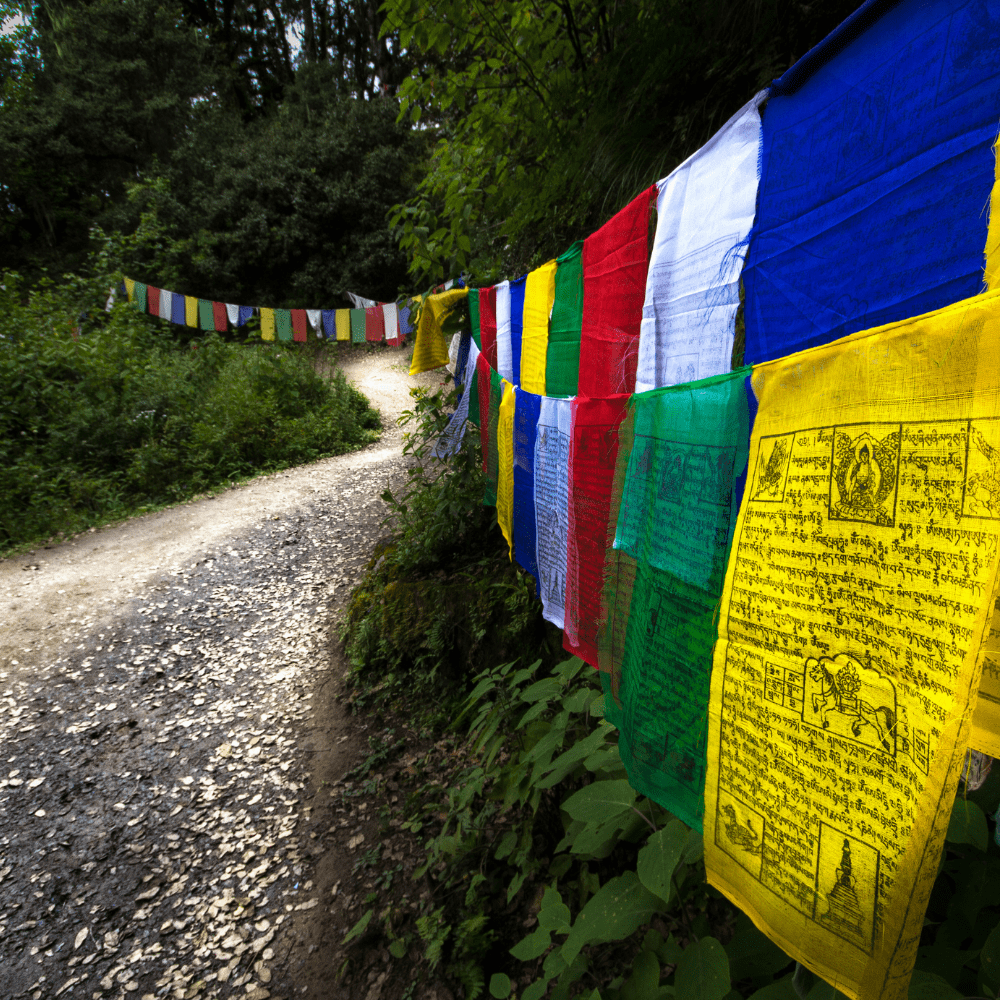 The trek to the monastery in most parts is quite defined

How to Reach Tiger Nest Monastery?

Tiger’s Nest monastery is a short drive from Paro, the only city which has an airport in Bhutan. Entry through the land is possible only for citizens of SAARC nations with valid government-issued ID cards.

Druk Air, the national airline of Bhutan has sole rights to operate flights and is connected to Mumbai, Kolkata, Delhi, Guwahati, Bagdogra, Bangkok, Singapore and Bodh Gaya, Kathmandu and Dhaka. 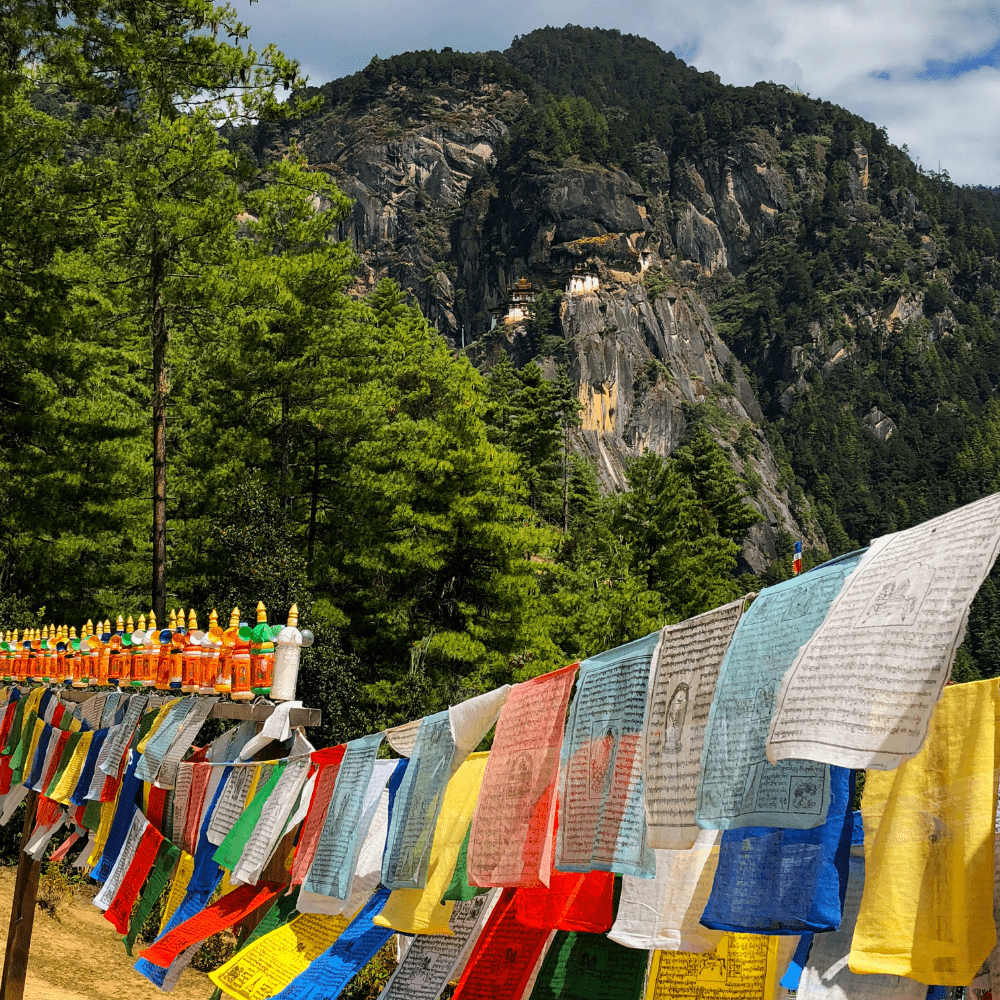 Preparing for the Trek up to Tiger Nest Monastery

The trek can be qualified as moderately challenging and can take anywhere from 4 hours to 6 depending on fitness levels and climatic conditions.

Weather can change from sunny to rainy in a matter of minutes so a light waterproof jacket with a hoody is advisable. The uneven path can be hard on the knees so carrying Nordic walking sticks or any other support is a good idea.

Wooden sticks are available for hire at the base of the trek for less than 1 USD.  Except for a cafeteria at the mid-way point which serves coffee(a very big cup), biscuits and a few other refreshments, no other eatables or drinks are unavailable en route save for the welcoming waterfall near the monastery whose water is very much drinkable.

The cafeteria serves a decent lunch buffet in the afternoons. Hotels generally provide a packed lunch and snack for the trek on prior notice. Carry a bottle of water and some light snacks in a backpack. Rest whenever needed and savour the trek in an unhurried manner. 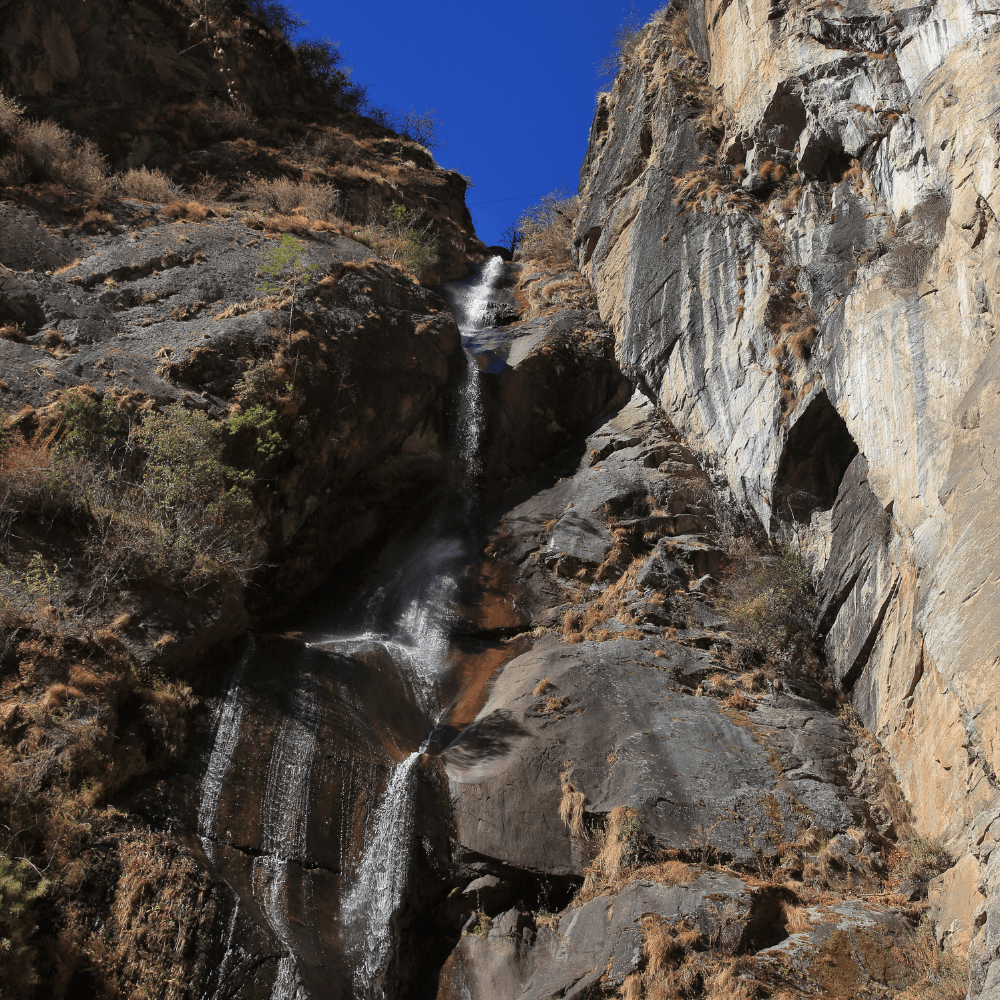 This waterfall is such a delight along the long walk to the Monastery. By the way, this water is pretty much drinkable.

At the Tiger Nest Monastery

Full sleeved clothing is a must and photography is not allowed inside the monastery to maintain its sanctity. There are many temples within the monastery each with its own legend and significance. As the temples are cut from mountainous rock, they are located at different heights within the complex. Iconography resplendent in colour, artistic skill and execution abounds everywhere.

The narrow cave where the Guru Padmasambhava is supposed to have meditated can be reached by climbing down wooden ladders and is the most important spot in the monastery. Offerings in the form of eatables and money can be made. Watch the butter lamps being made to thank the gods for their divine blessings.

You will be encouraged to meditate and doing so, high up in the clouds in such an ethereal place is indeed a blissful experience. Vantage views of the valley can be had from several places in the monastery. The cool mountain breeze that blows continuously exhilarates the senses and induces a sense of spiritual high. 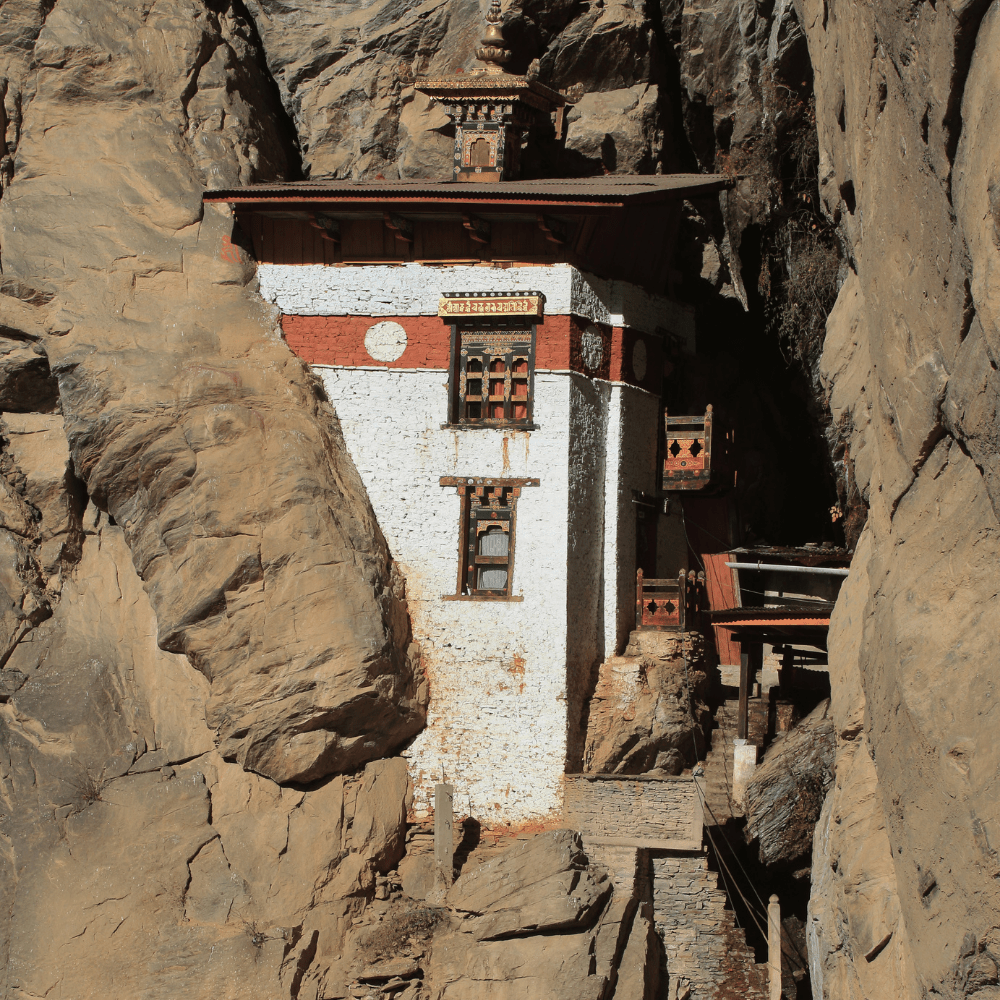 After the Trek to Tiger Nest Monastery is Over

You are likely to be tired by the end of this trek and some people find the return trek trickier especially if it rains as the slopes get slippery and harder on the knees. Reward yourself with a Bhutanese hot stone massage which is very different from the Balinese one. Ask your tour guide to fix an appointment for this massage which is usually done by locals in their farmhouses amidst the peach orchards. Unlike regular massages, your body is not kneaded by hands.

Stones from the Paro river are heated up and placed inside wooden tubs filled with water in which you lie down and relax while the minerals from the heated stones seep into the water and work their magic on your tired limbs. If the water cools down more heated stones are added. Have water to avoid dehydration.

The strong home-brewed wheat wine that is provided at the end of the hot stone dip(which is a more appropriate word than massage) is like the icing on the cake. A bonus is that you get to see what a traditional Bhutanese home looks like.

Until recently Bhutan’s hospitality industry catered to the discerning high-end traveller but things have changed and several budget options from 3 star, 2 stars to home stays are available. Wi-fi is available though not easily. The Bhutanese as expected are a friendly, happy and welcoming bunch and speak English (except in the elderly) as education in English to the 10th grade is mandatory and free so communication is hassle-free.

Suggested budget accommodation in the 50USD – 70USD range. The hospitality industry in Bhutan is in its nascent stages with demand far exceeding supply so extremely low priced accommodation would be severely lacking in amenities and is sure to ruin your experience. 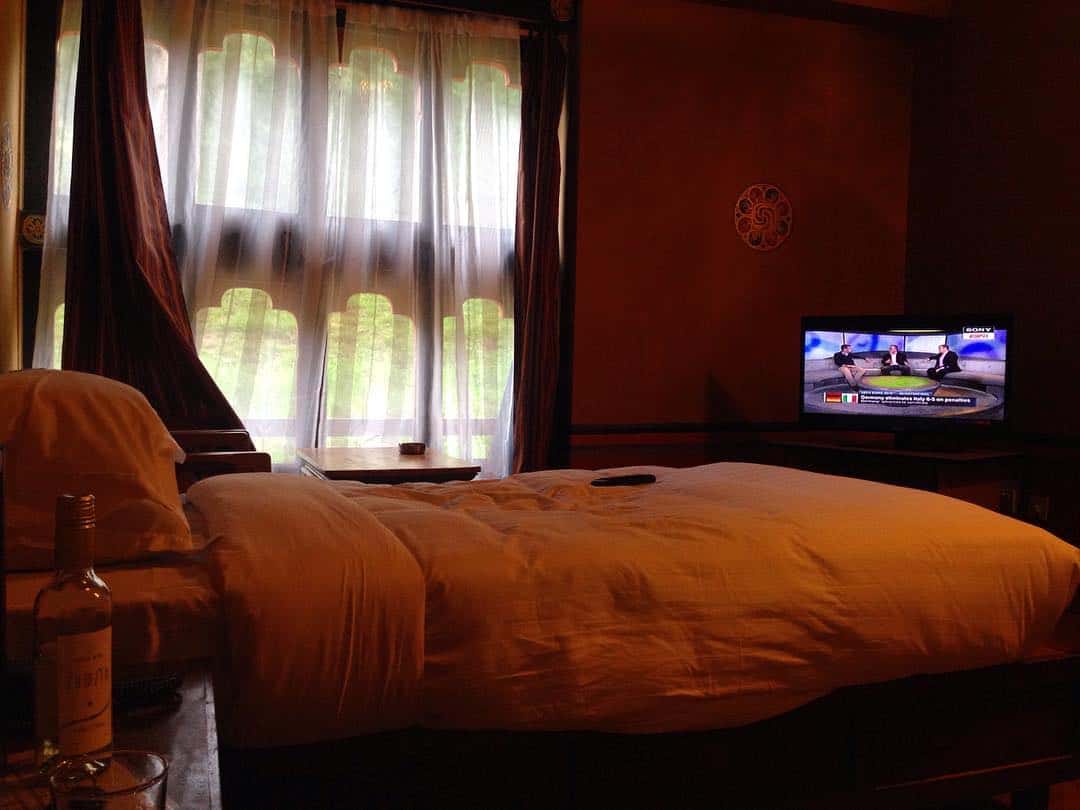 A room in Olathang Hotel. Photography by Sonam 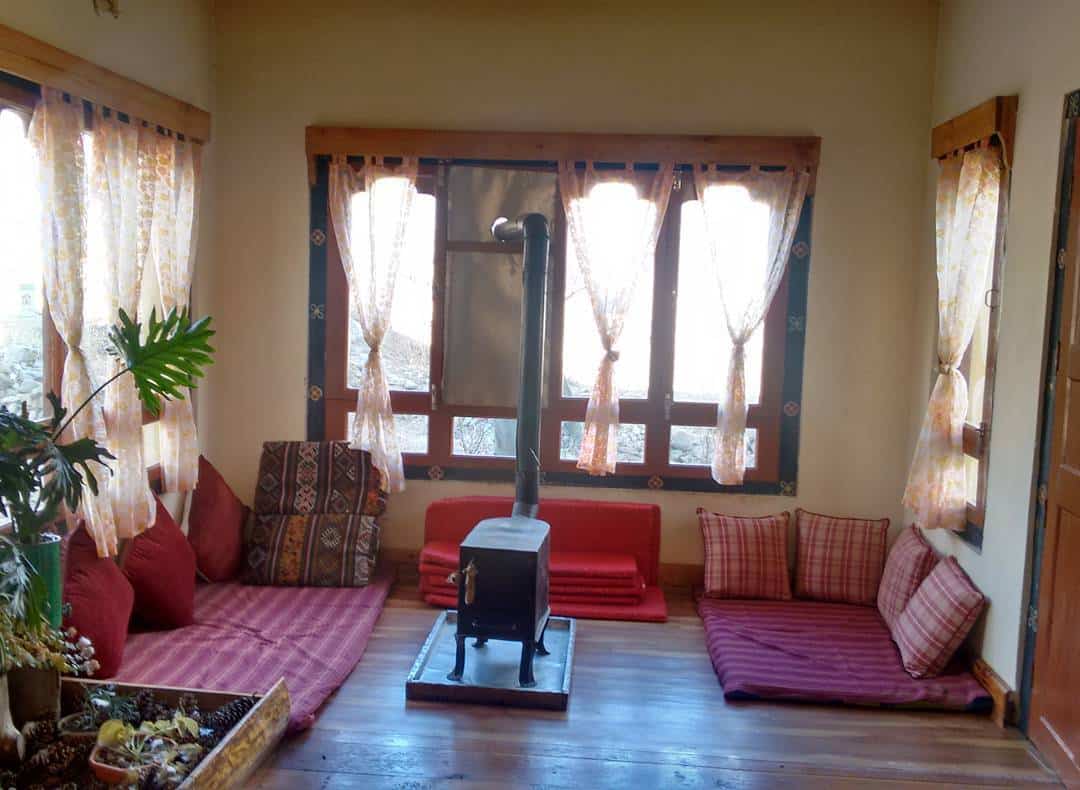 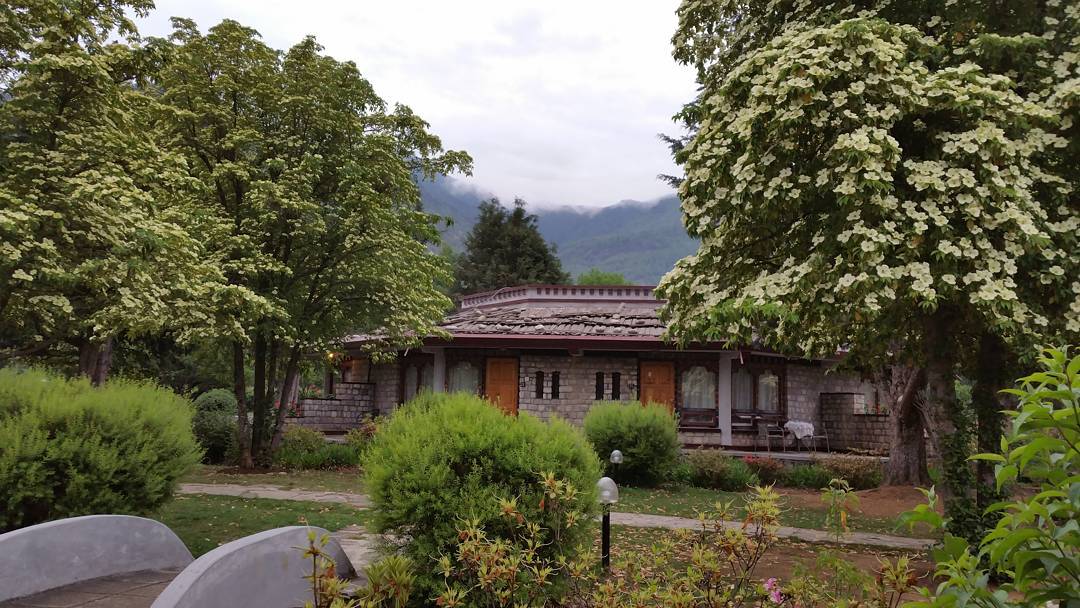 What and Where to Eat?

Bhutanese do not slaughter animals for food or fish in their numerous streams. Meat and fish are imported from India and are not fresh so it is wise to stick to local vegetarian options.

The cooking methods are simple and the spices do not overwhelm your senses in a manner that the intrinsic taste of the food is lost.

Ema datse the national dish of Bhutan made of cheese and chillies is ubiquitous on every restaurant menu.

Sugar was virtually unknown to the Bhutanese until recently and rasgollas from India come closest to qualify as Bhutanese dessert. 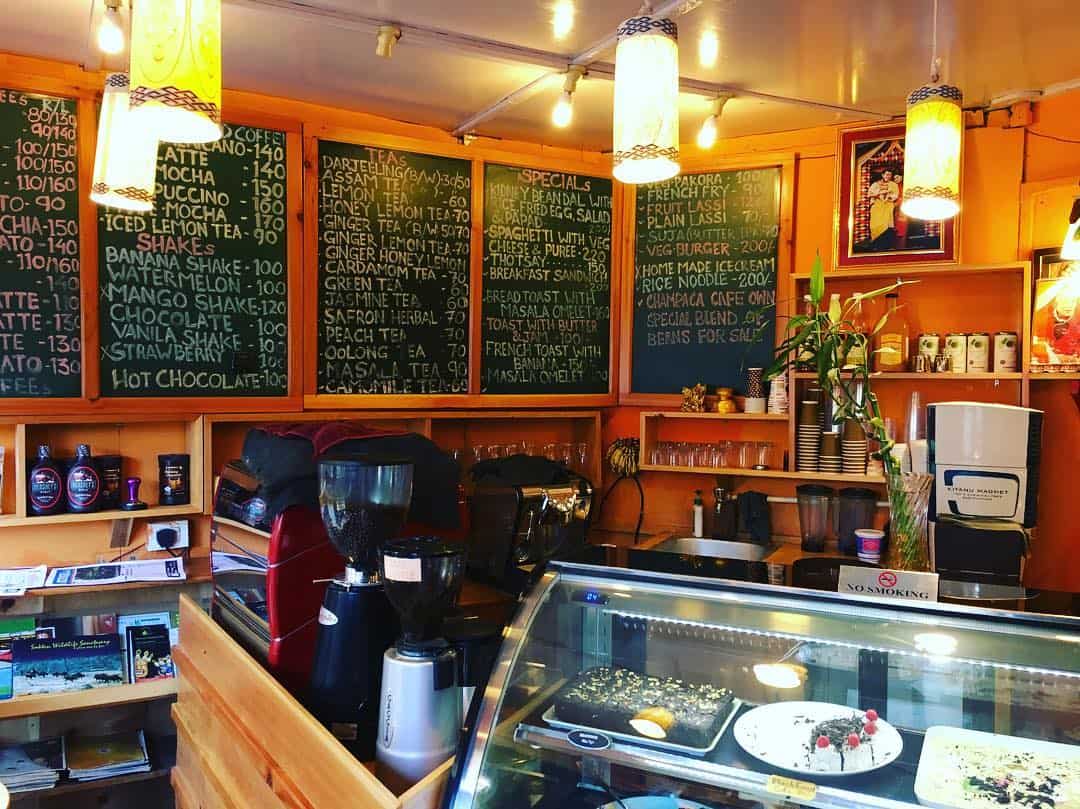 Bhutan is a country that values harmony and happiness more than material accumulation. The essence of its religious philosophy percolates into the daily lives of the Bhutanese and touches all aspects from food, and occupation to thoughts and interpersonal relations. In this country, one can see the concept of simple living and high thinking in action. The Tiger’s Nest monastery has come to symbolize all this and more.