Known to be a shepherd’s boon, Rupin Pass trail in the present times brings out the lustre and warmth embedded in the purest form of what nature personifies with its rich vegetation and ever-changing fauna.

If you call yourself a passionate trekker, you have got to embark on an adventure on Rupin Pass. The region is visited by trekking communities not just from India but across the world. 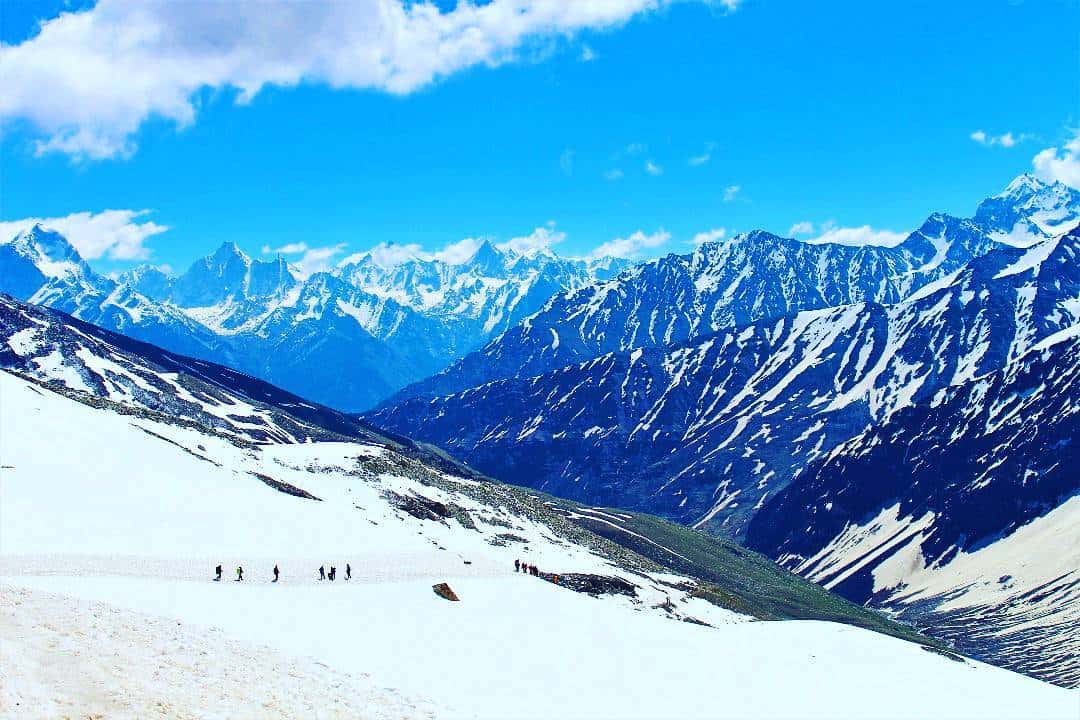 Rupin Pass trail brings out the lustre and warmth embedded in the purest form. Photography by Sunil Kumar Patro

10 Stages of the Rupin Pass Trek 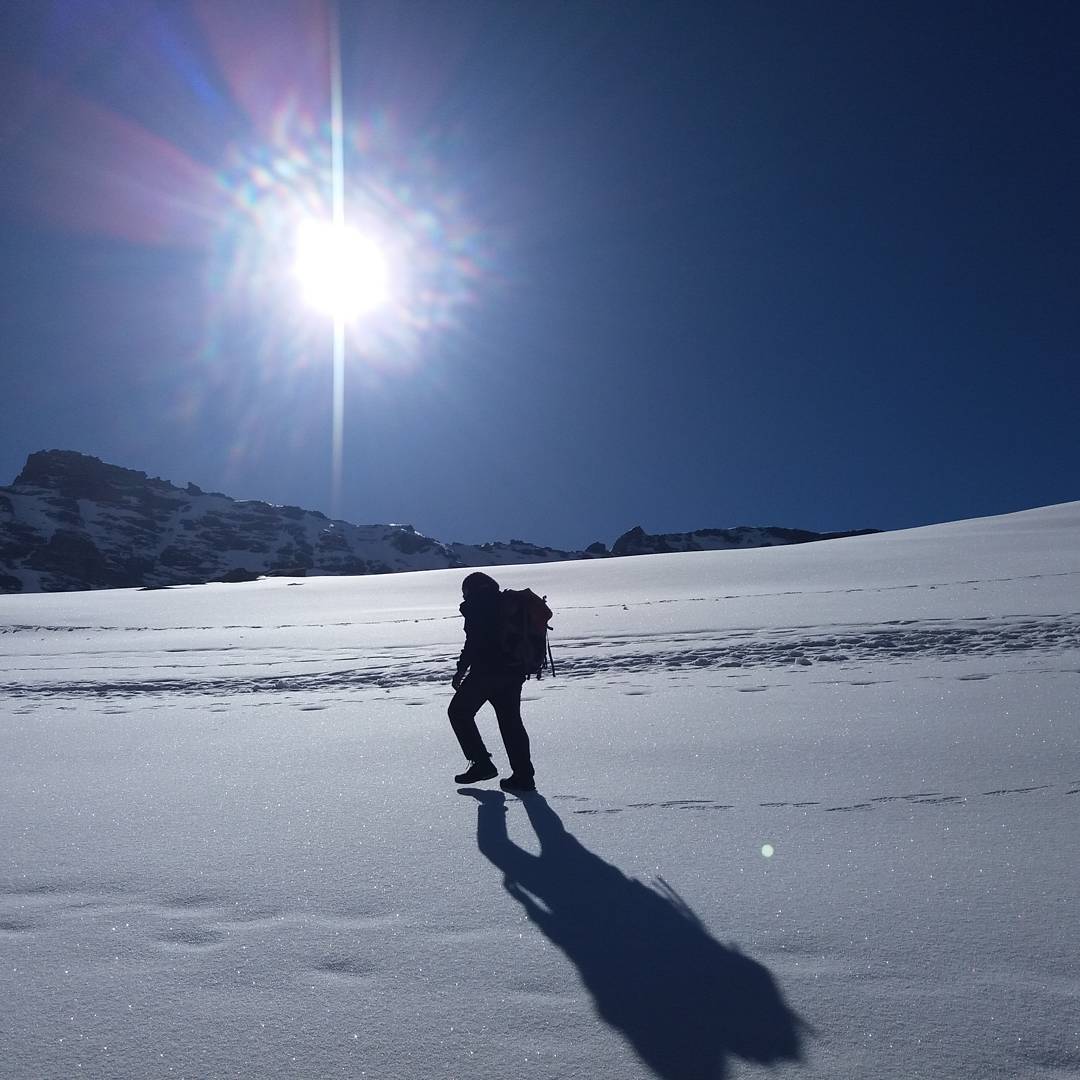 Passionate trekkers have got to embark on the journey to Rupin Pass at least once. Photography by Casen

Below I delve into the details of my Rupin Pass experience. I will also be sharing with you my itinerary for the trek.

Reaching the Base Location and Beginning the Rupin Pass Trek

The trek to Rupin Pass starts at Dhaula, a small village in the Uttarkashi district of Uttarakhand popularly known as the base camp for the Rupin Pass Trek. The campsite is typically put up alongside river Tons, of which Rupin river is a tributary.

The most convenient way to reach Dhaula is by hiring a shared cab. Buses to Sankri are available from Dehradun, after which one will have to hop onto a shared cab that drops the passengers off at Dhaula. In case anyone wishes to try out the latter, it would be best to keep yourself updated with the latest schedule/timings.

The Village Experience: A Personal Memoir

The route from Dhaula to Sewa kicked off with a slight drizzle along the climb. Our Ponchos were out in a jiffy and the road became muddy.

Our first campsite was at Sewa. The village was overlooked by hills on both sides and filled with apple plantations. It provided a picturesque location that would help us generate enough content for our Instagram handles. The villagers welcomed us jovially. “We won’t receive a good harvest this season”, remarked one of them without the slightest despair in his eyes. Maybe harvest did not make their priority list or they did well enough to not let that bother them, I never got to ask.

In the evening we headed out and paid a visit to the village temple. If the legend is to believe,  the king of the landmarked the place demarcating the boundaries between two neighbouring kingdoms. As a result, the village became a form of Sewa (service) for the people and the temple, its monumental landmark.

Our next campsite was at the village of Jiskun and the day was well spent. Our trekking team was introduced to a green trail initiative and our task for the day started off early evening. We moved around the village with plastic bottles in hand, searching for garbage and stuffing bottles in order to recycle them by making bottle bricks.

We met many villagers along the way sharing stories of the surrounding peaks, that were passed down over generations. In the midst of all that mysticism, it took the warm sensation of hot tea on our palms to bring many of us back to our senses. The day ended with a comfortable stay at the village campsite (the last village campsite before we headed into our makeshift tents). 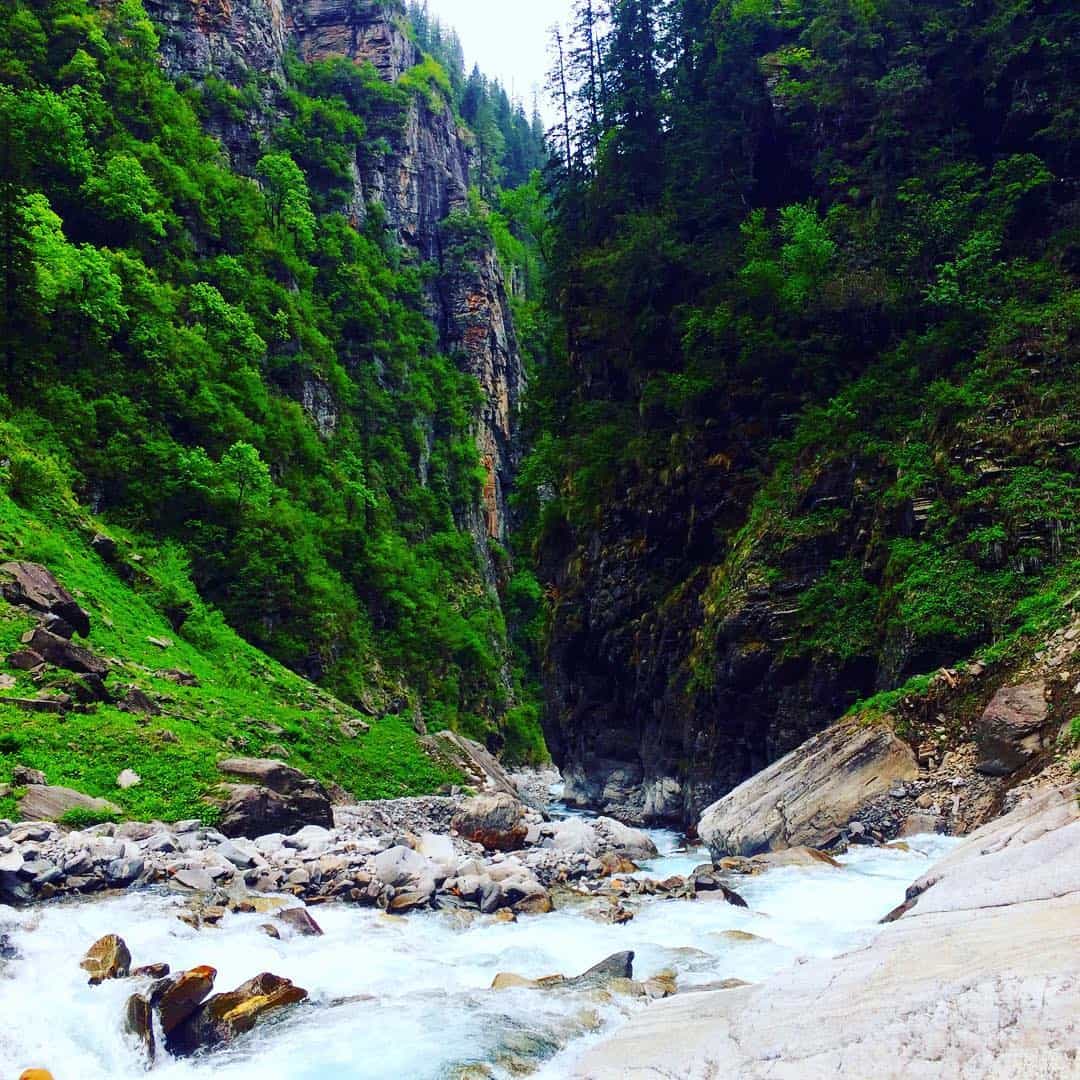 Our journey to Udakhnal started off early the next day and for the first time, we got to touch the banks of Rupin River after crossing a thick canopy of coniferous trees. The river water was icy cold and we were advised not to get ourselves wet so as to maintain a warm core body temperature. Altitude sickness was real, and the frequency at which our trek guides and leaders reminded us of it did not seem like something to be taken lightly.

We also crossed Jakha village, known as the hanging village as most houses were constructed with long extended wooden supports below that when covered by fog or shrubs appeared to be floating in the air. Jakha is also the last village along the trek route. We also came across a tea stall along the banks of Rupin river (the very last man-made structure before reaching Sangla, the endpoint of our trek) and took a short rest and relished bowls of Maggie and warm cups of tea.

A couple of hours later, we reached our campsite which was engulfed with high rising hills on both sides. The sunset was early and the campsite got very chilly as soon as the sun hid behind the hills.

A couple of trekkers (including me) did not have trekking poles which were supposedly crucial for crossing snowfields (in the forthcoming days) providing essential balance and support. Our guide came to our rescue. He left the site for a while and came back with a bunch of sticks that we could use as makeshift poles for the trek. I carried two of them till I reached Sangla. 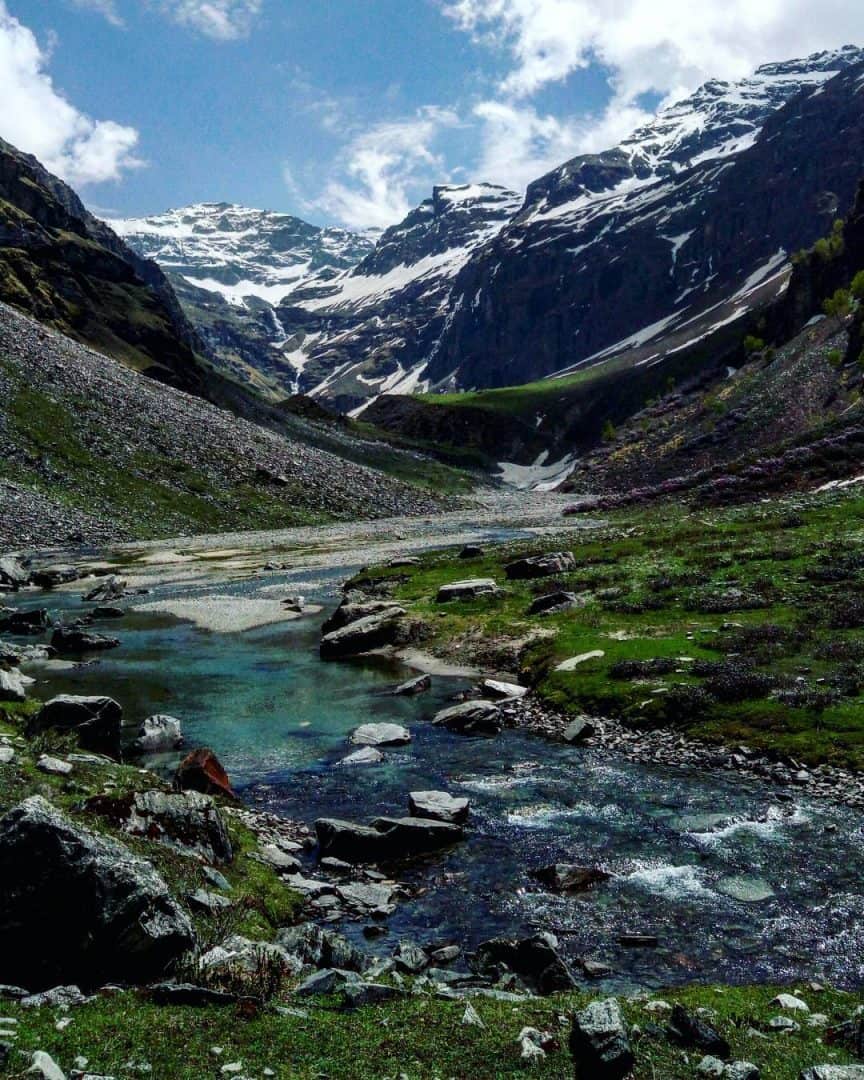 Entering the Snowfields and Training to Climb on Snow

A short steep climb brought us back into the midst of thick evergreen woods. A long trail ensued and took us from the deepest parts of the woods to the vast open fields of the Dhanteras Thatch. Depending on one’s luck, you will either be greeted with vast green fields with cattle grazing and pigs running around or a white bed of fluffy snow that would seem never-ending. I received the best of both; the nearby slopes were filled with sparkling snow yet most of the greener pastures remained uncovered.

In the evening, we got to meet another batch of trekkers who had started off on the very same trek a day ahead and had completed their acclimatization stay at Dhanteras Thatch.

The following day was kept aside for acclimatization which took place with some tough training in snow walking and balancing techniques. After a tedious climb up a snowy patch, came the snow sliding time. Our shaky legs had already tensed up muscles which made us look like a bunch of Pinocchios (without long pointy noses, of course).

We learned how to manoeuvre through hard and soft snow, and also got trained in first response in case we fell prey to slippery snow. 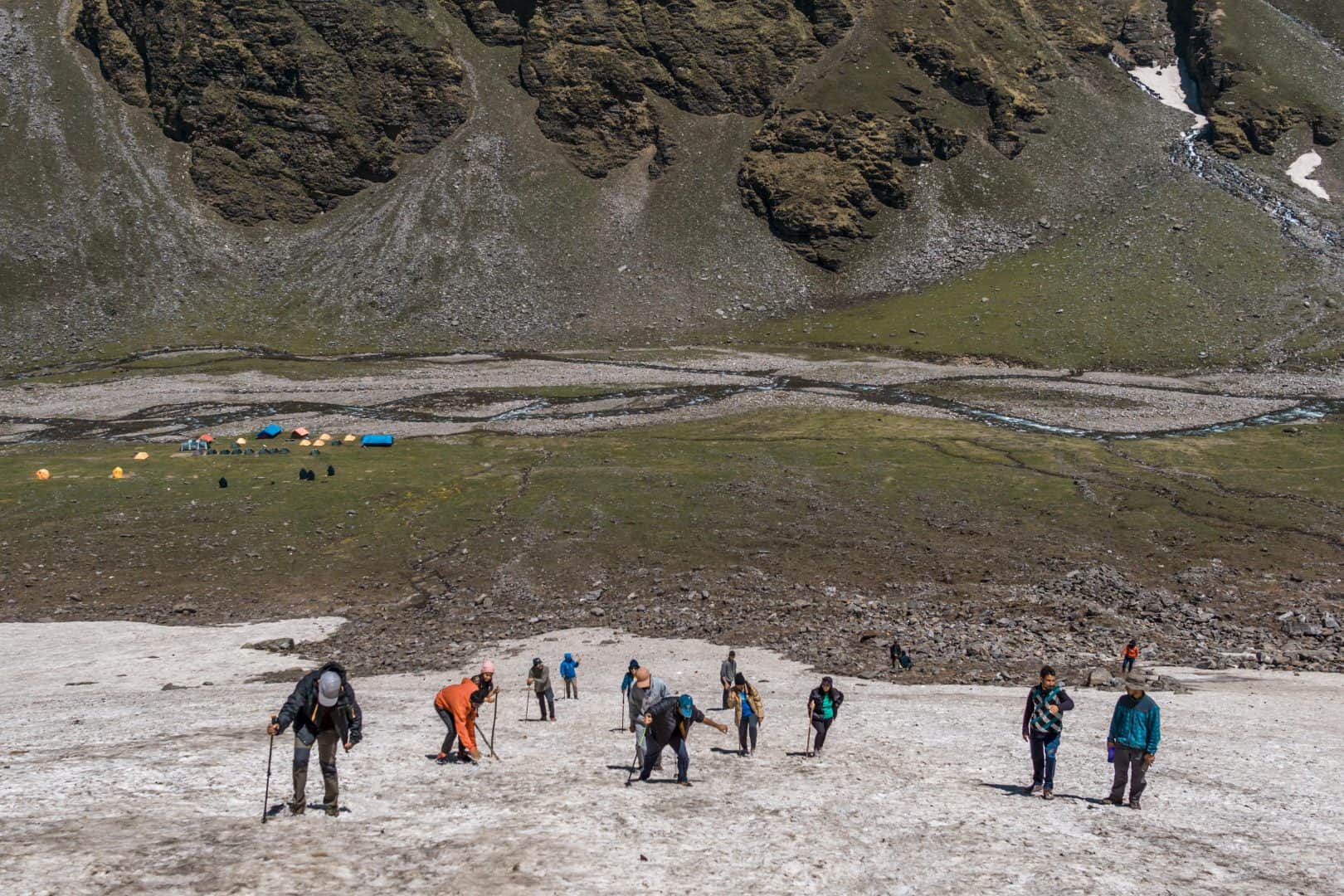 Rupin Pass to Ronti Gad and Exit at Sangla

Our long and arduous journey finally seemed to be paying off with the past insight. Little did we know that the 70° inclined slope had more in store than snow for us. The technical team dug up tiny pits on the hardened snow with their ice-axe carving path as the rest of the trekkers followed suit.

Once at the top of the pass, the razor-sharp Kinnaur Kailash range was visible insight. We spent some time, taking a couple of group photographs and headed to one of the most thrilling sections of the trek, the snow sliding. Within 3 levels of sliding, we made a swift drop of a few hundred feet in altitude.

Ronti Gad was the penultimate camp on our trek and we received fresh snowfall the following morning after which a long bending path alongside green meadows took us to the culmination of our 9-day escapade at Sangla.

To many, the sight of the Sangla township paved a way for relief and freedom, yet I was met with an undefined form of grief. One which yearned to get back to the hills and have another round at it, maybe this time from Sangla to Dhaula.

Reasons to do the Rupin Pass Trek

As expected of any ‘Himalayan’ trek, Rupin pass is best experienced in its present. Not the thought of what climb is yet to come or the thought of what is left behind, but soaking in most of every climb, every turn that unlocks a different side to the mountains. It is even more crucial to do so when doing Rupin Pass trek because the scenery changes vastly as one moves from one camp to the next.

Villages are hidden in between thick canopy, paying way to lush green fields followed by never-ending stretches of snowfields going all the way up to the mountain tops. The weather becomes unpredictable and so does the environment, where a moment’s warm sunshine moment can, in another moment turn into a snowy blizzard that can leave your tents shuddering beneath the howling mountain winds.

The way to the pass and eventual descent over a period of 3 days leaves a vast amount of space to be able to experience snowfall in the region too. It surely makes the trek a bit harder and trickier, but the scenery definitely leaves anyone not wishing for anything otherwise. 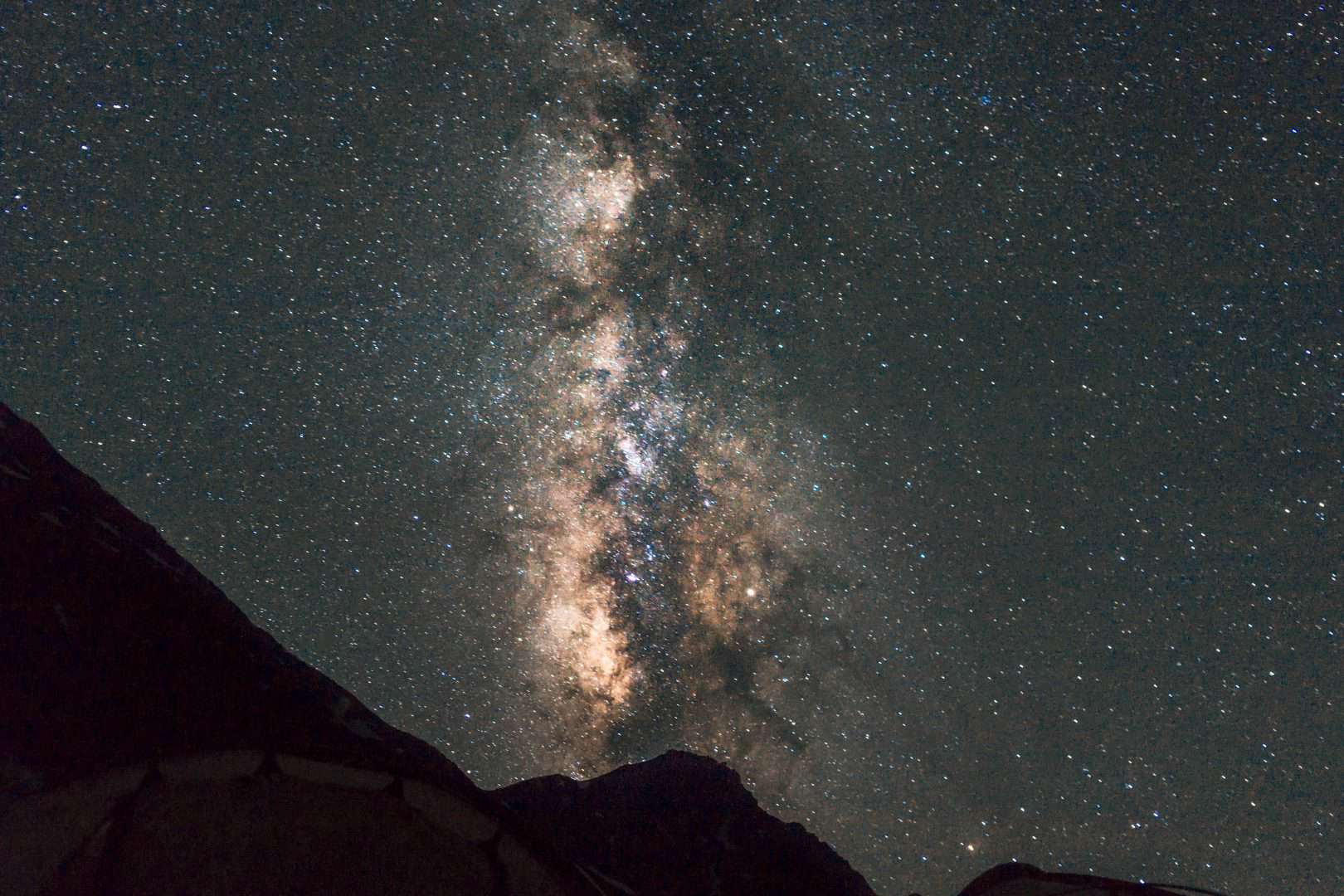 Staring at the night sky. Photography by Abi Phor

The Rupin Pass Trek terminates at Sangla in the Kinnaur district of Himachal Pradesh and is well connected with different modes of public transport.

I did not wish to leave the place or the trek or the environment around. It just didn’t seem like the best thing to do. Post lunch, the two of us set out to inquire about what all places would be feasible to check out around Sangla. Someone mentioned Chttkul, a small village in Kinnaur district which was the last inhabited village on the way to the Indo-china border, an old Indo-Tibetan trade route. Chittkul was also the last point in India, before crossing over to Tibet, which could be visited without the need for a permit.

Chitkul, as expected was a tiny quaint village settlement alongside the Baspa river. Known for its world-class quality of potatoes, any potato dish served here would truly mesmerize even the most potato-averse of people. Chitkul is also the ending point for the Charang la pass trek that takes off from Reckong Peo. You will also find the area mostly uninhabited except for the presence of travelers spending a couple of days here before starting off for their next journey ahead.

This was my very first High altitude trek and Rupin Pass seemed daunting and impossible at first. It is undeniably a difficult trek that trekkers should not go for, underprepared. Yet it stands as a symbol for the many things that stands impossible for us. It set a new standard for me as I pushed my limits & discovered how the impossible is achieved. Maybe next time you think of doing a daunting task or climbing a mountain, you can recall this post about a guy who did what he thought was impossible for him.

One step at a time, it was never easy yet it was quite simple. 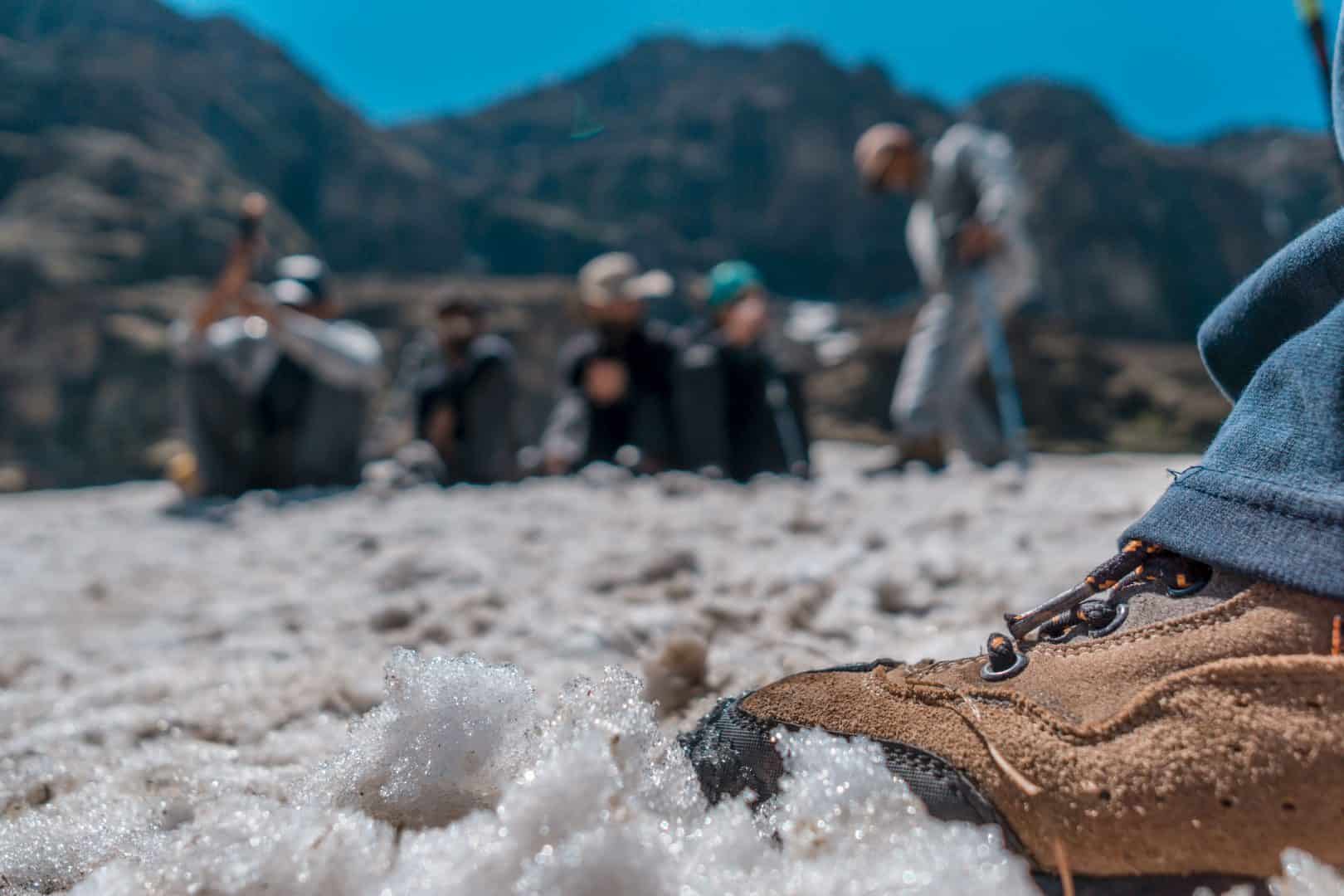 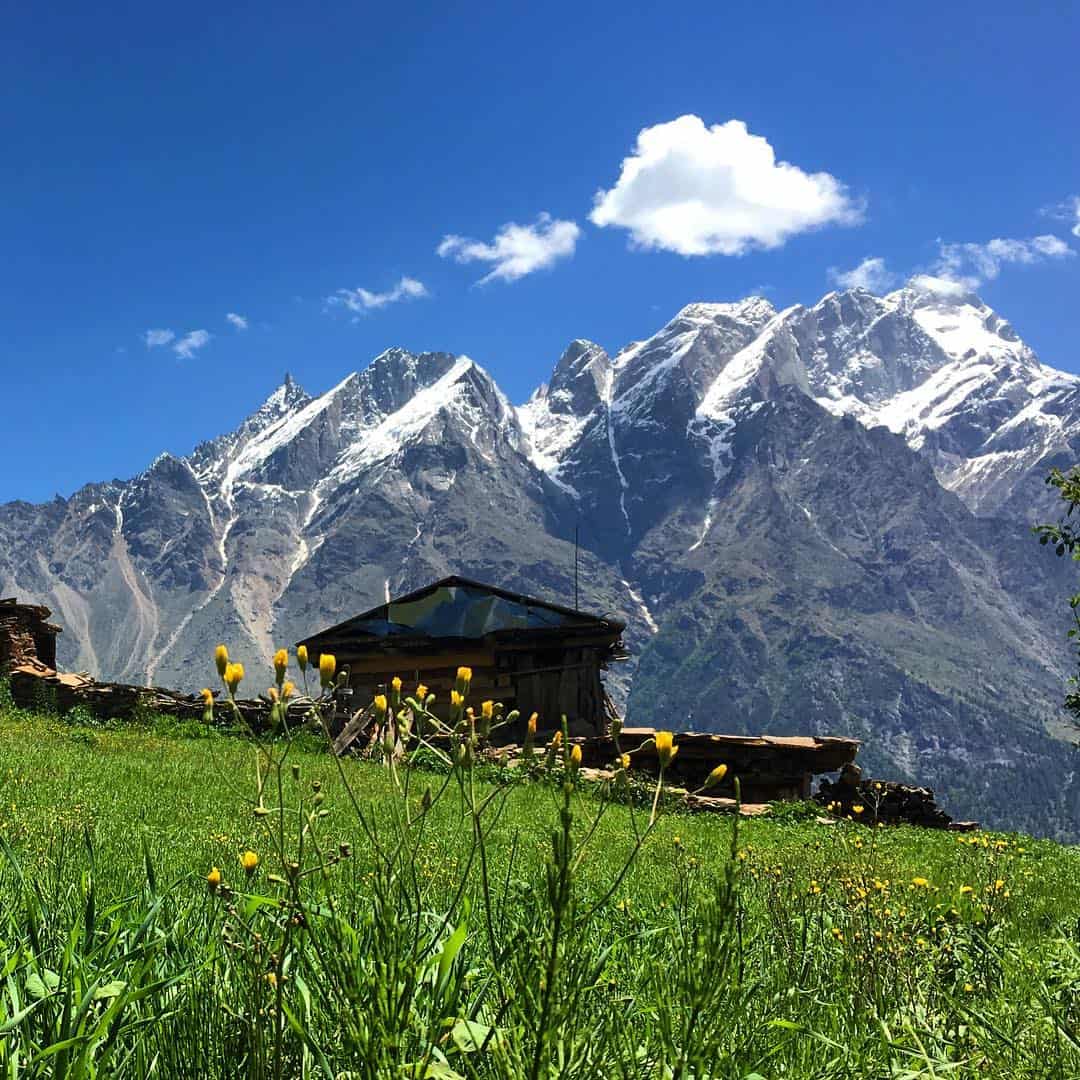 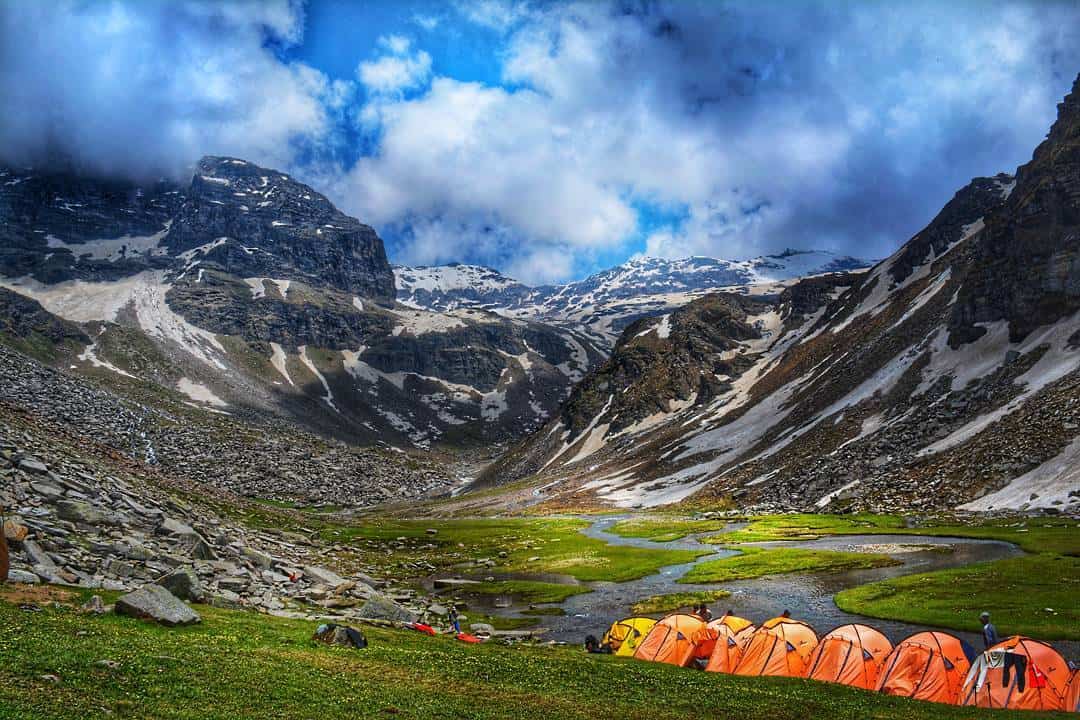 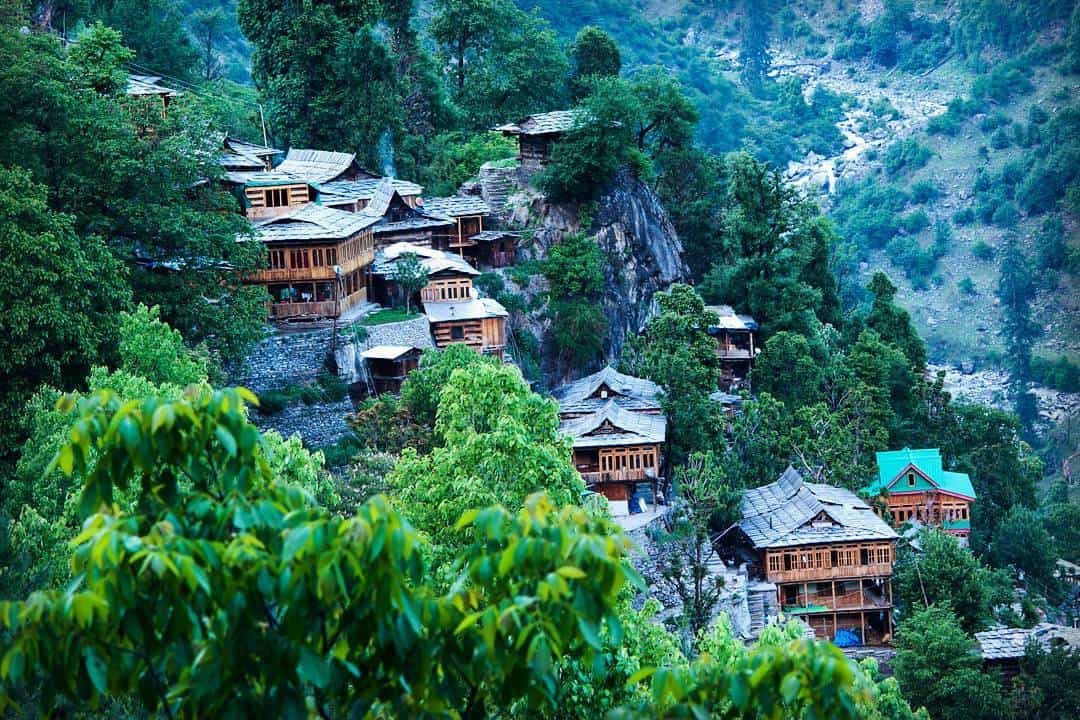 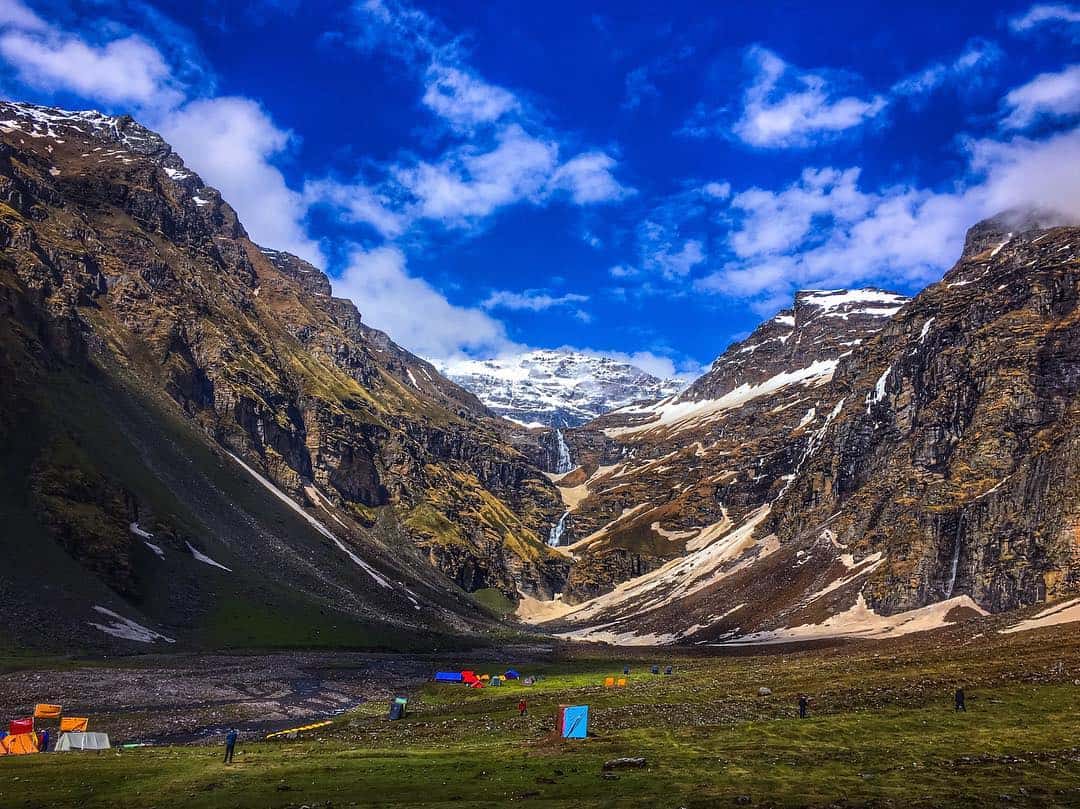 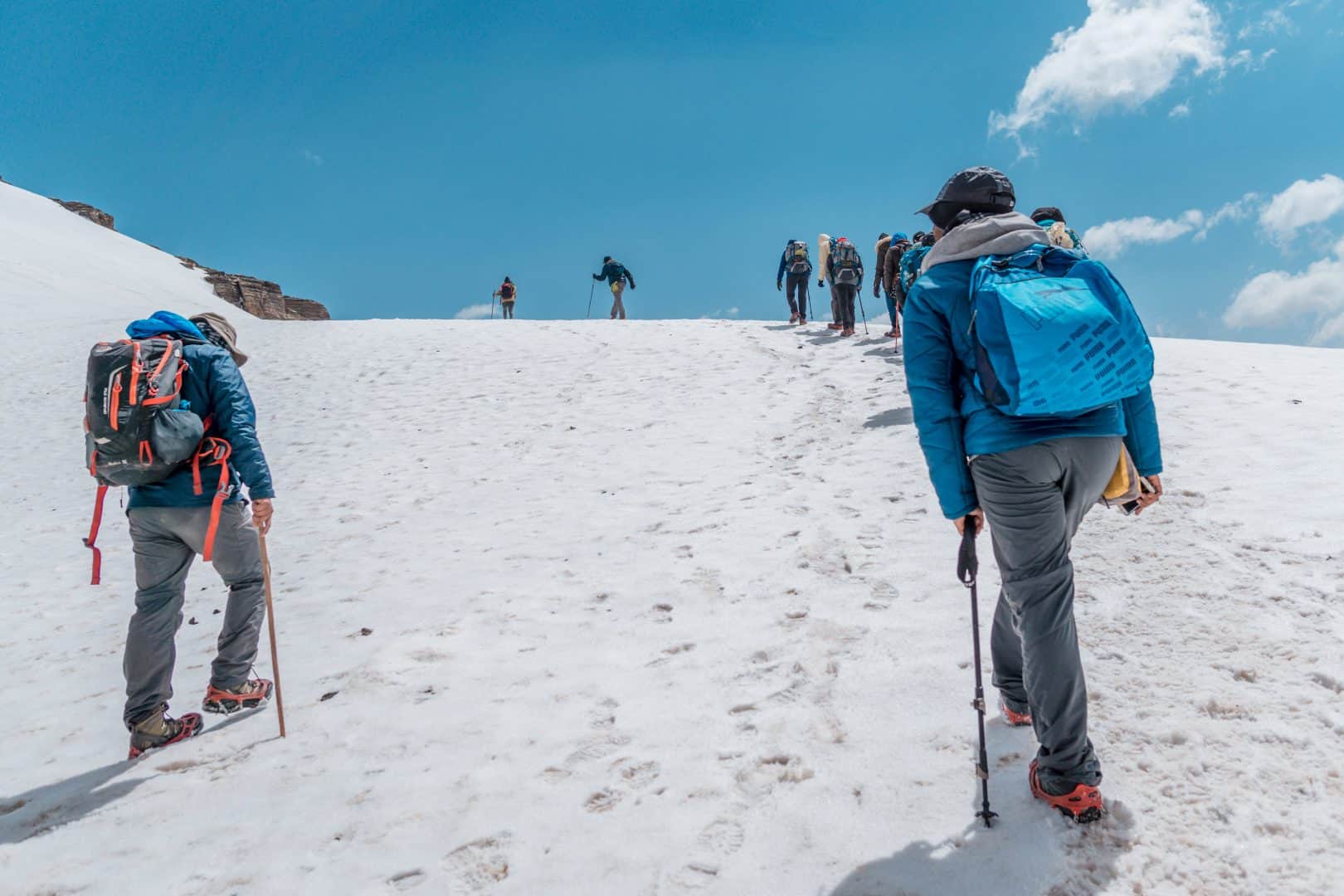 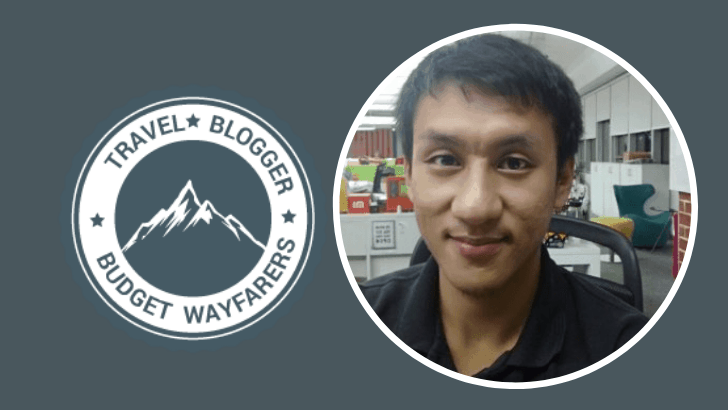 Abi Phor is a Brand Manager by profession. Outside his day job, he spends his time as a photographer or cooking with his secret recipes. He enjoys jotting down what he experiences through which he found his way to writing. A drifting soul by nature, he tries to make the best out of what he gets along his way.”