Why I Fell in Love with the Wonderful Uzbek People !!

People of Uzbekistan are warm, kind and so welcoming to travellers that you won’t miss your native place for a day in this lovely nation. People are what makes a place what it is. And Uzbeks are a lovely people.

I travelled solo to Uzbekistan from India and found the Uzbeks as warm as my own people are back home. They literally made me their own and have left happy memories for life.

Sometimes, the smallest gestures by strangers touch you in a big way. This works more when you are in a faraway land. As a traveller, I can recall so many wonderful moments during my solo trip to Uzbekistan. 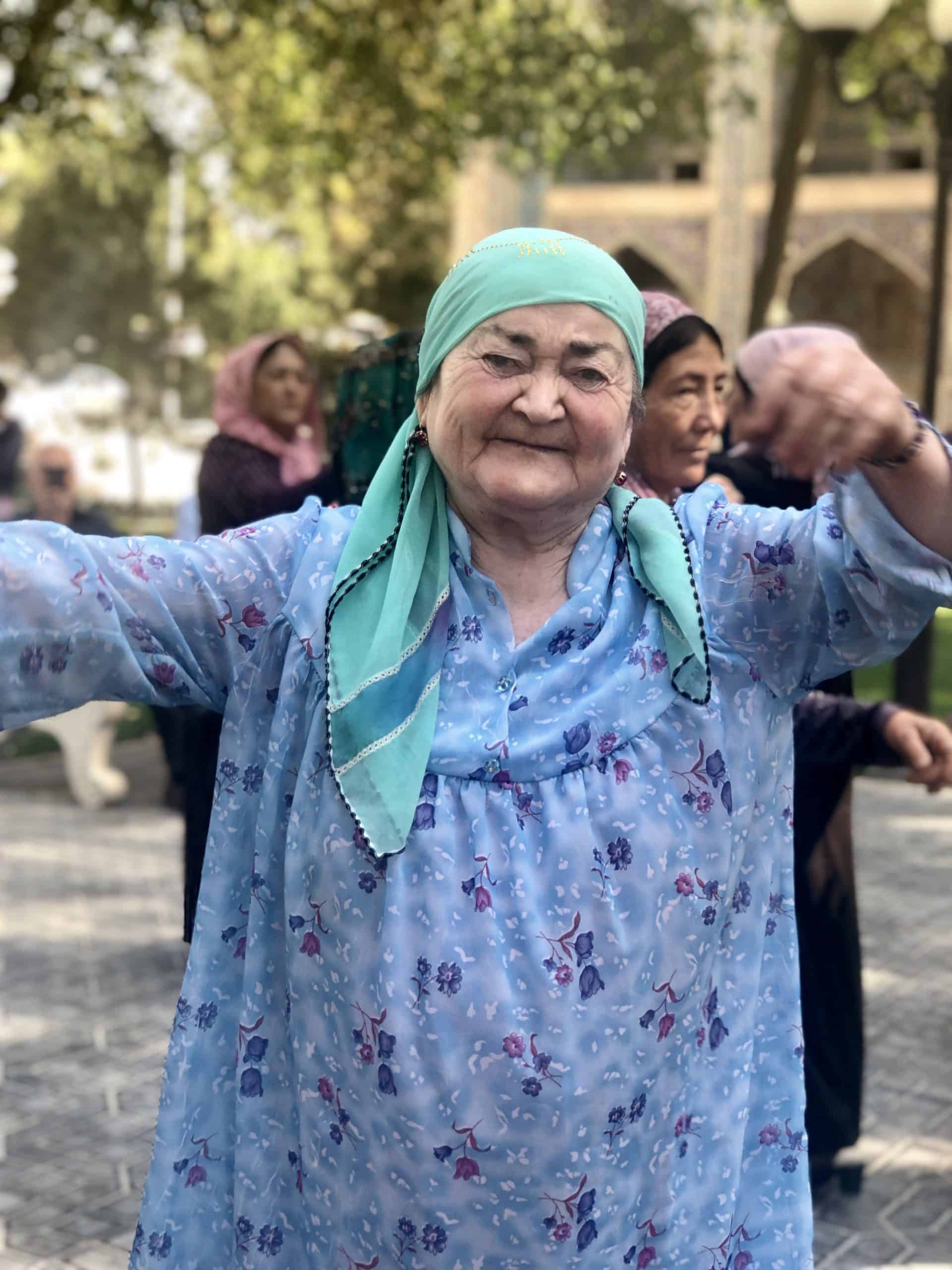 Uzbeks are fun loving people. They love their dance and music. They laugh and smile a lot. Uzbekistan is a lovely country because the Uzbeks are a lovely lot.

People of Uzbekistan – The Heartwarmers

When I first thought of taking a trip to Uzbekistan, I did a lot of research on the region. It was only fair given the fact that I was travelling to a region marked by unrest and turmoil in the past.

I assumed the region to be conservative and the people to be sceptical of outsiders like me. However, when I actually began travelling solo to Uzbekistan, I was struck with awe, love and respect for the people, the world calls Uzbeks.

No amount of gracious words will be enough for such a lovely tribe of people. Throughout my independent travel experience in Uzbekistan, not once did they make me feel homesick.

Crossing the Barriers of Language with People of Uzbekistan

Most Uzbeks don’t speak English. But even then the language barrier became the slightest of my worries during any interactions that I had with the people around me.

And I spoke to so many people – street vendors, railway authorities, airline officials, waiters in the cafe, passersby on the road, taxi drivers, a family on the train and a whole bunch of strangers.

A smile on my face and hello on the lips of unknown common Uzbek folks in front of me were enough to get me to start a conversation. From the accent of English alone, the Uzbeks could find the nationality of a traveller like me.

They knew I was from India – the land of diversity and culture. They shared my love for Bollywood music and respected my food habits which very clearly eliminate beef.

When people abroad respect your stance as a traveller, you end up respecting so much more. This respect and love became mutual throughout the course of my solo trip to Uzbekistan. 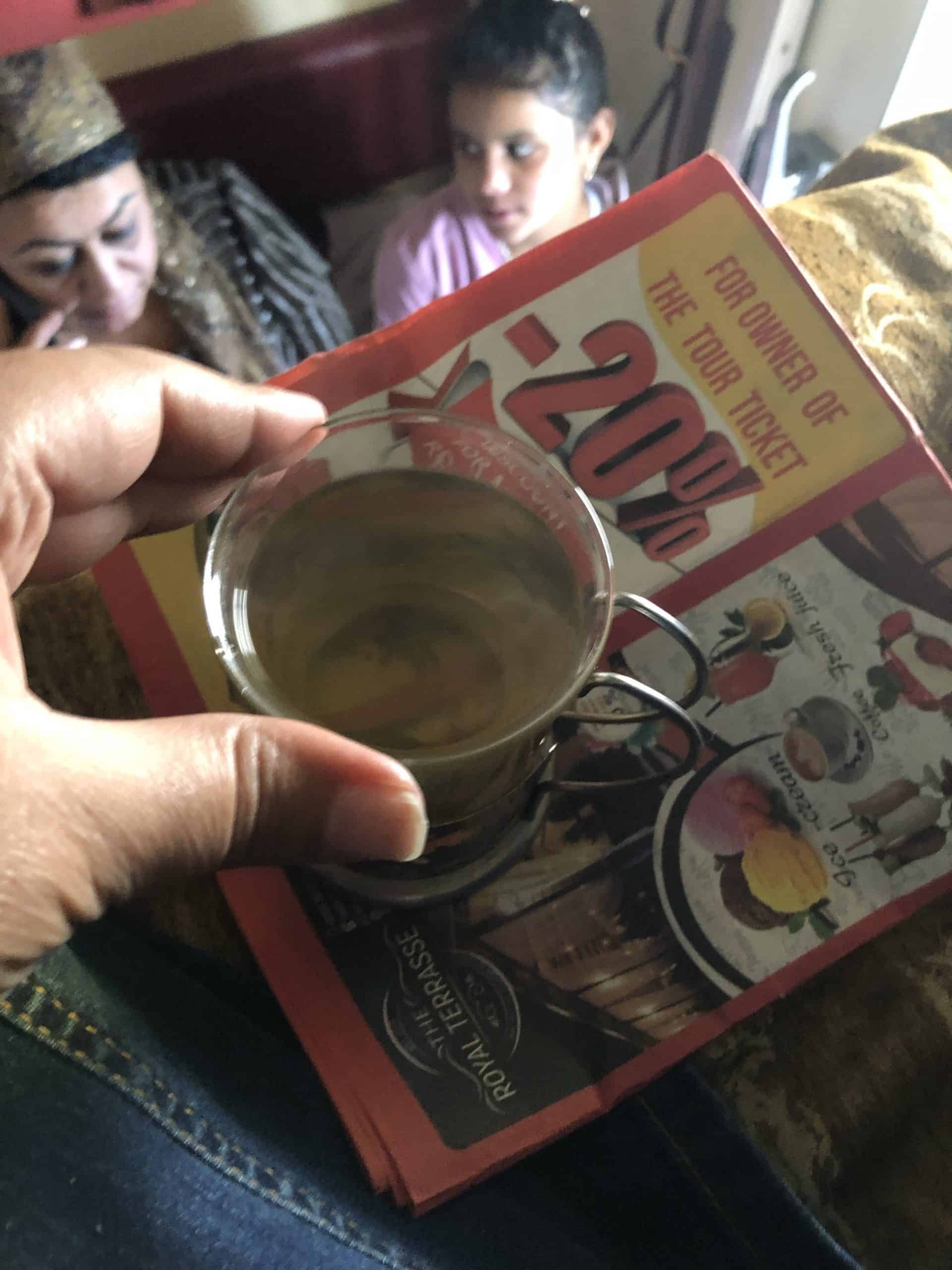 This lady in the picture who happens to be a mum as well made the sweetest gesture on my train journey in Uzbekistan and won my heart forever.

The Uzbeks are Caregivers and Treat Travellers like their Own

It isn’t every day that you travel to a foreign country and find yourself included in a family’s personal moment. Well, I have a great story to narrate here.

Once, while travelling on an overnight train in Uzbekistan, I was marooned on the upper berth. In the morning, when I got up, I saw an Uzbek mother and daughter sitting on the lower berth and sipping tea.

As is with me, the first thing I need in the morning is my cuppa too. I sat contemplating, whether to climb down and go looking for chai in the pantry car or wait for the attendant to pass by so that I could ask for some.

Uzbek Moms are the Best

I was just thinking all this while as to what to do when this lady on the lower berth sensed my need. I guess mums across the world have hearts full of love. This kind mum asked me if I would like to have tea as well.

I thanked her and said I would get it by myself. However, she kept insisting that I stay put, while she sent her daughter, who would have been barely 10 yrs old, to get me a cup too.

The little child rushed and brought me a steaming cup of chai, handing it over to me with a wide smile and twinkling eyes. I gestured and asked the woman how much I had to pay, she smiled warmly and said “nothing”.

I insisted and so did she. She won! And all this happened when none of us spoke each other’s language. It is in moments like these that one realises that love and courtesy have a universal language that connects us all.

The ice was broken thus. I climbed down from the berth and the rest of the time was spent chatting with each other, as strangers usually do, on a journey together. 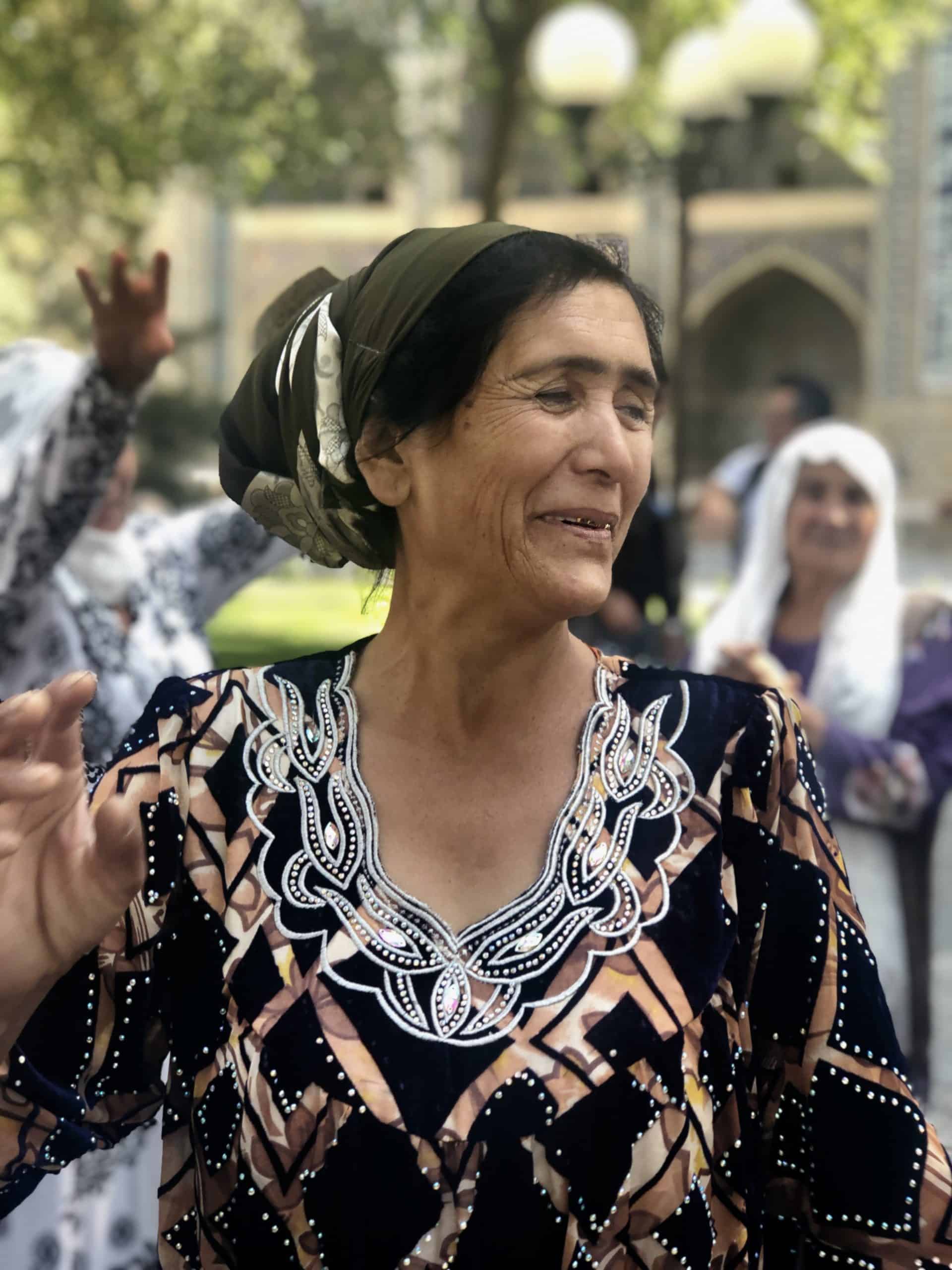 A culture that thrives on happiness, warmth, joy, dance and celebration is a culture to be inspired by as a traveller. It is nice to see the people of Uzbekistan having such rhythm in their lives.

From Taxi Drivers to Shop Owners, the Uzbeks are All Welcoming

Very often, when a shop owner or a taxi driver would know that I was from India, his face would light up. He would mention how so-and-so from his family had visited Delhi once and then narrate the whole experience.

They would talk in excited tones about how much Bollywood they watched on Sat TV and rattle off the names of their favourite film stars. This made me both happy and surprised at the same time.

The Uzbeks Love Getting Captured on Traveller Cameras

While strolling in a bazaar or visiting a popular place in Uzbekistan, someone would just request me for a picture, impromptu. Young and old, all alike.

Of course yes, I posed in quite a few, becoming a part of their memories like they have become a part of mine. Such is the innocence of the Uzbeki people that they will engrave an everlasting impression in your mind. 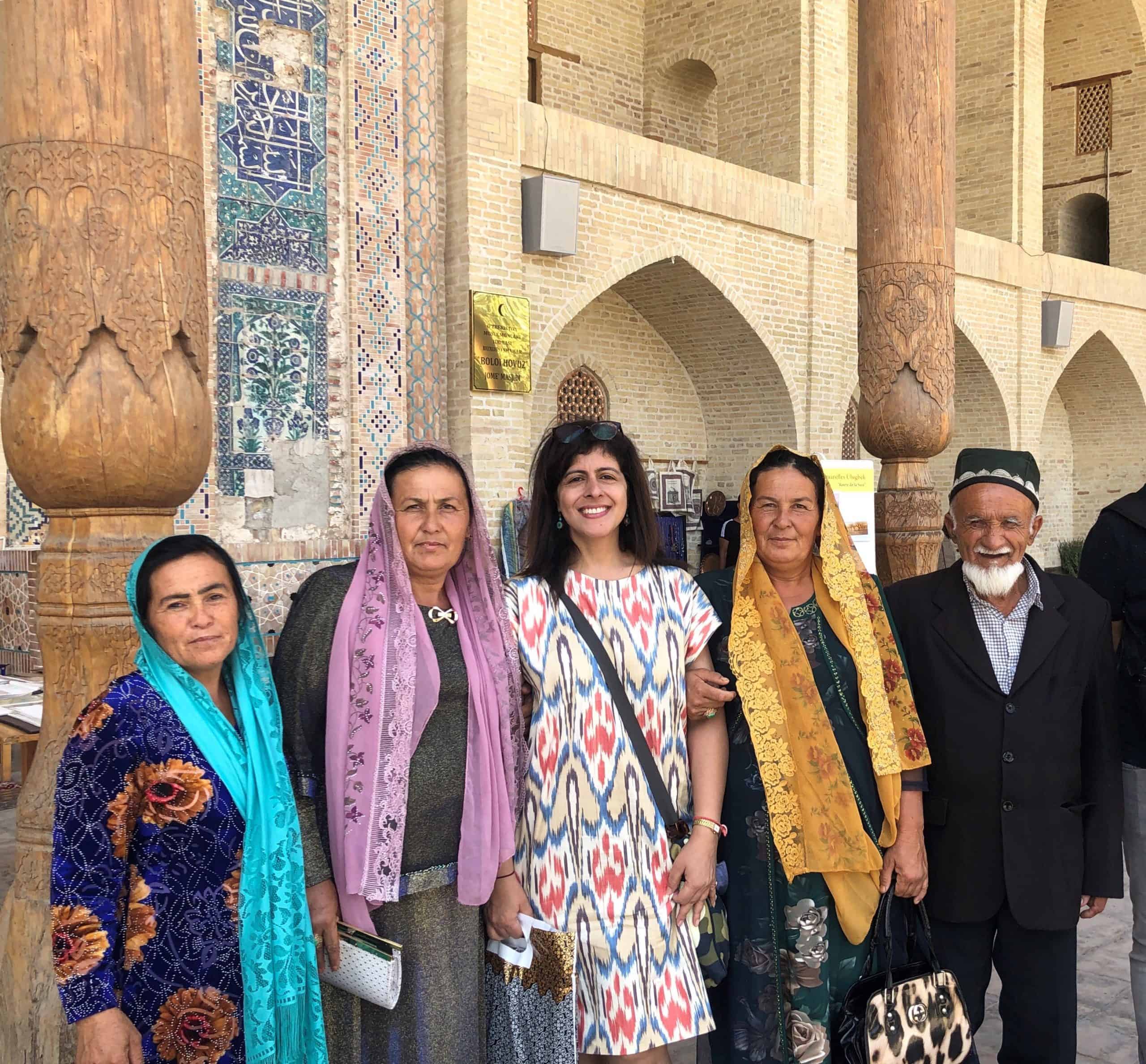 I posed in quite a few pictures with the innocent Uzbek people and became a part of their memories like they have become a part of mine.

Travelling on one’s own isn’t easy. And it’s not easy at all if you are a female solo traveller. Yet, not once, during my entire stay, did I feel fear or any uncertainty while dealing with random people.

Nobody bothered me or hounded me, although I did get noticed as a solo traveller.

Even while shopping for lovely souvenirs from the bazaars in Uzbekistan, no shopkeeper pushed me beyond a limit. I took my sweet time looking for stuff. And yet, they didn’t find that long time irksome.

I can only thank the people of Uzbekistan for their kindness and patience.

One day while paying a visit to a Sufi shrine in the city of Bukhara, a very talkative taxi driver played the latest Uzbek songs for me and filled me in on the local history and culture.

He bought me Kurt (local sour cheese balls) with his money when I pointed at the roadside seller asking what it was. All this, when he spoke only Uzbek and I tried to make sense with some random words that I found familiar.

By the way, Kurt happens to be one of the 13 wonderous dishes that you must savour as a traveller visiting Uzbekistan. You cannot miss out on any item. Try them all.

Uzbeks are fun-loving people. They love their dance and music. They laugh and smile a lot. I would sum up by saying that, plan a trip to Uzbekistan if you love history and the amazing people who made that history. 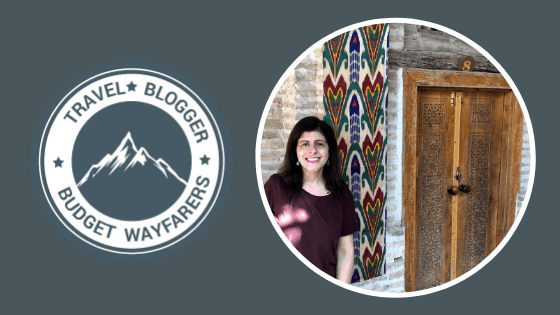 Namrata Wakhloo hails from the magnificent region of Kashmir in India and is currently settled in Gurgaon. Having pursued a Bachelor’s degree in Engineering and a Master’s in Management from Pune, she worked as Head of Corporate Social Responsibility with a Fashion Retail organisation in Gurgaon, India. She is married with two children. However, being a mum of two hasn’t stopped Namrata from exploring the world. She believes in Independent Travel and has recently tripped solo to the gorgeous Central Asian country of Uzbekistan. She has truly fallen in love with the Uzbeks, their land and their way of life. In the near future, Namrata plans to travel solo to more Central Asian countries as well. Reach out to her on Twitter.