Kuari Pass trek is located amidst the gorgeous Garhwal Himalayas. It offers majestic views, an easy trail and fairly good weather conditions. The best part about the Kuari Pass trek is that beginners will love it. In fact if you are a first timer, Kuari Pass trek will be a good experience to start.

I had won an all-expenses-paid trek to Kuari Pass courtesy of Tripoto and India hikes for being the 2nd topper in the leader board list for the most credits achieved in the month of June.

I had to spend six months waiting before the day arrived when I set my foot on the Himalayan terrain. The hype was built up with each passing day. Two weeks before the big week, there were reports of the cancellation of the Har-ki-Dun trek for the season.

This was followed by more bad news stating the Kuari Pass trek had been cancelled for a recent batch due to an unexpected snowstorm. My heart shook. All that time I had spent imagining how it would be, all that hype could be sucked out from me in a jiffy, I had my fingers crossed and thankfully it worked.

So, in the current article, I’d like to provide first-hand travel information to future trekkers and hikers. 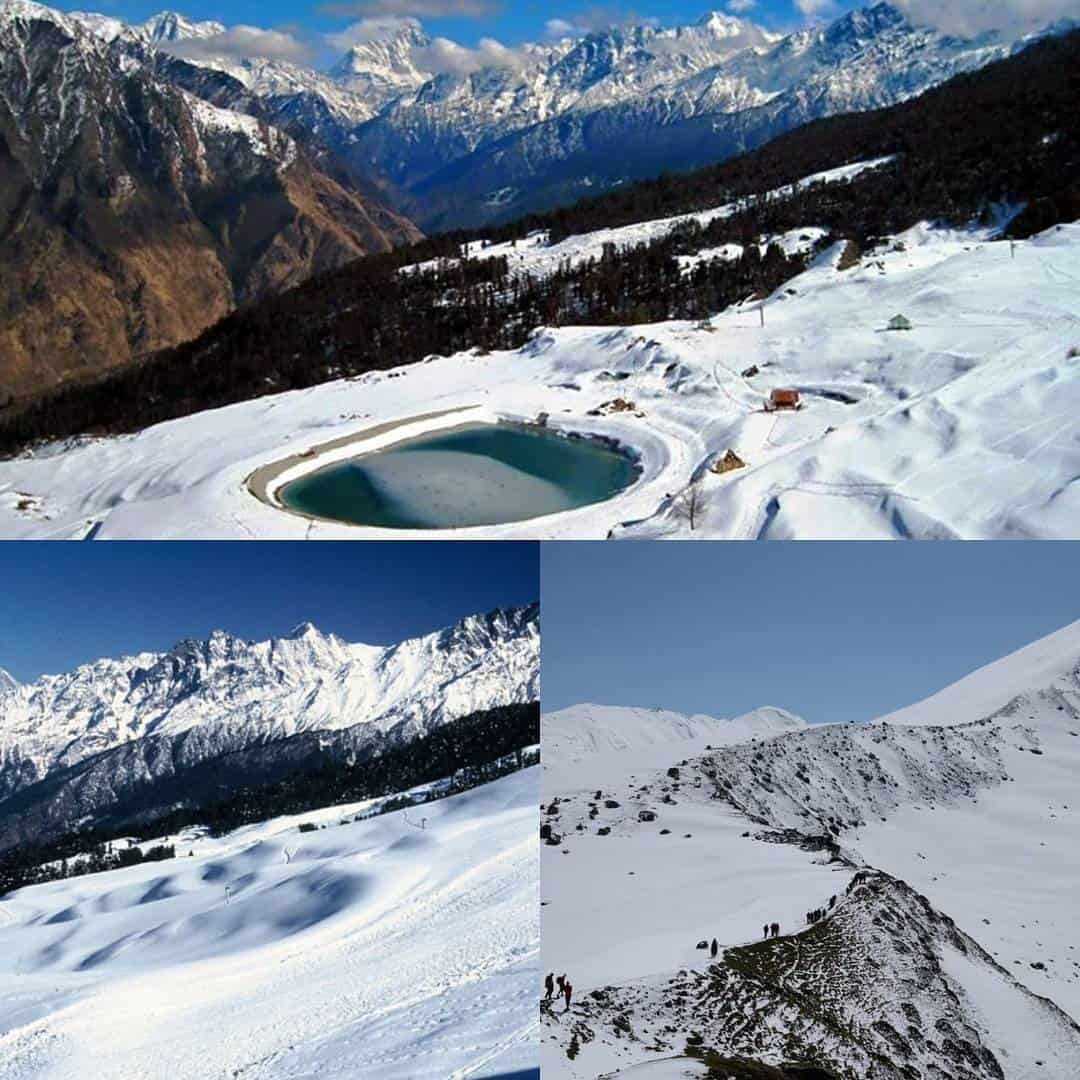 Kuari Pass trek is located amidst the gorgeous Garhwal Himalayas. Photography by Sachin

Kuari Pass trek being easy to moderate in nature is extremely convenient for beginners. Sure, there will be obstacles but none that cannot be managed easily. The campsites along the Kuari Pass trek are spectacular and so are the natural landscapes.

For a first-timer, Kuari pass trek will come across as a beautiful experience since it offers a decent natural introduction into the Himalayas. There are not many treks in India that offer magnificent views on the first day itself. 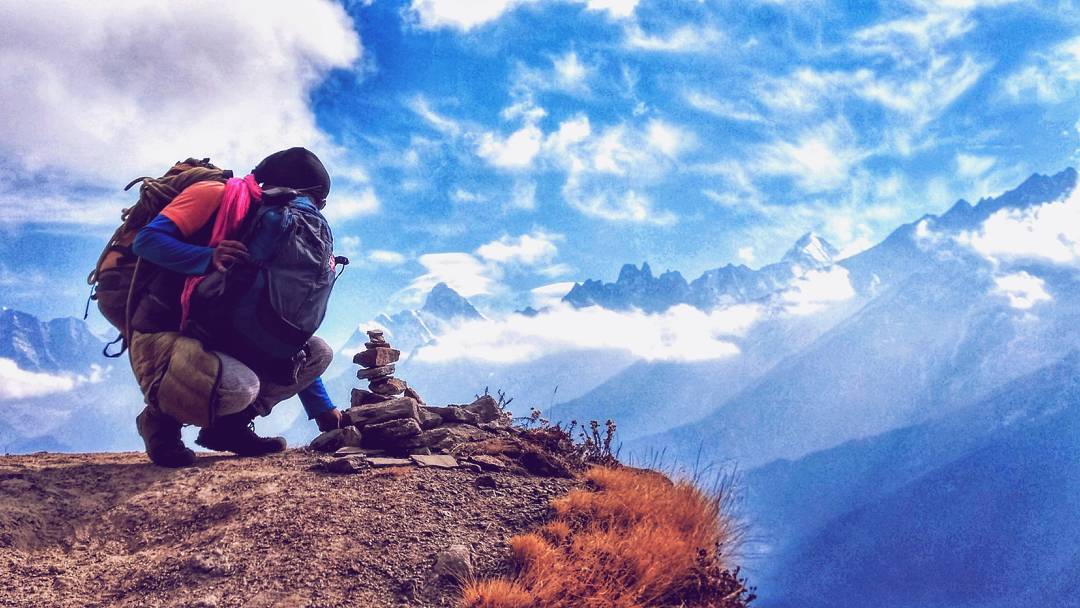 Kuari Pass trek being an easy to moderate in nature is extremely convenient for beginners. Photography by Niveditha Narayanan

The Kuari Pass trek route that I followed was different than the usual route. But it was worth it. 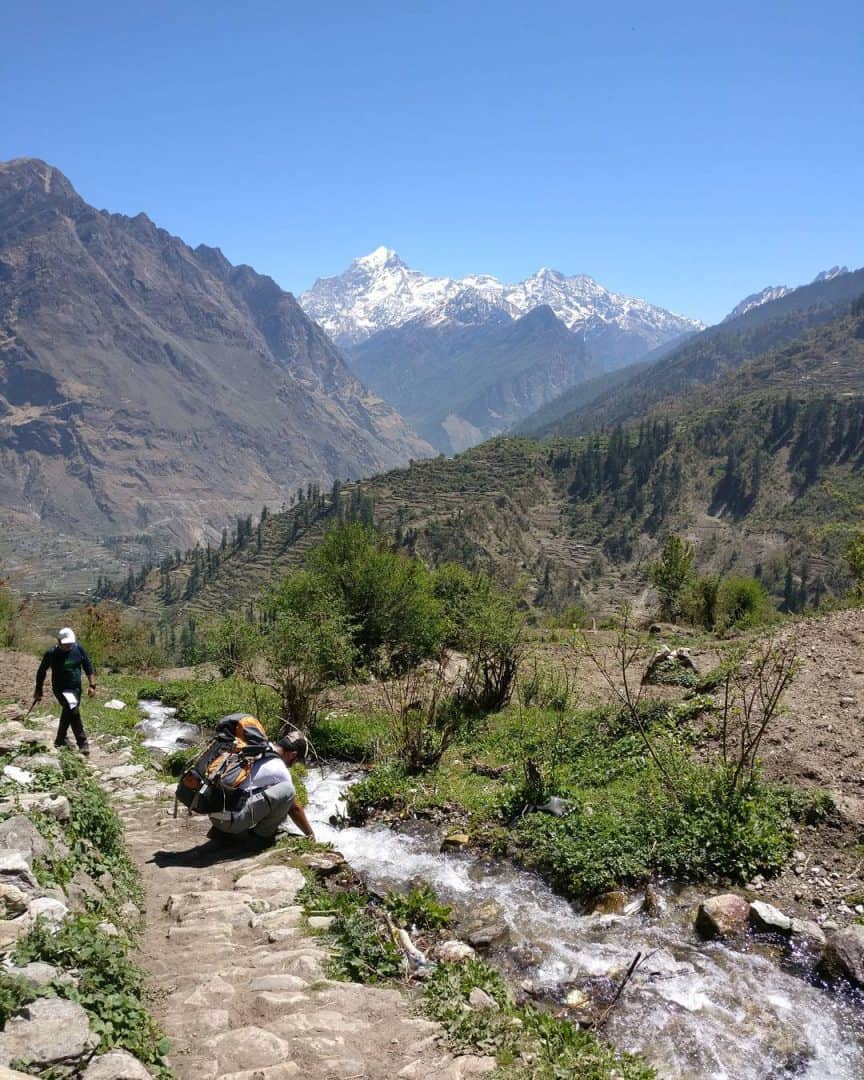 What to Pursue After Kuari Pass Trek ?

Lord Curzon – the Viceroy of India from 1899 to 1905 A.D was a curious trekker. He is credited for having discovered the Kuari Pass trek. There is an interesting story behind the discovery as well as the name.

When Lord Curzon discovered the trail and witnessed Kuari Pass (not named at that time), curiosity hit him. He kept trekking and on reaching a place called Auli, he asked the locals about the name of the place. To his question, the locals responded and told him that the place was holy, untouched and without a name.

The witty man he was, Lord Curzon asked the local people as to what they call ‘untouched’ in their regional dialect. “Kuari” was the reply and henceforth the name was kept as Kuari Pass. The trail began to be known as the Kuari Pass Trek. 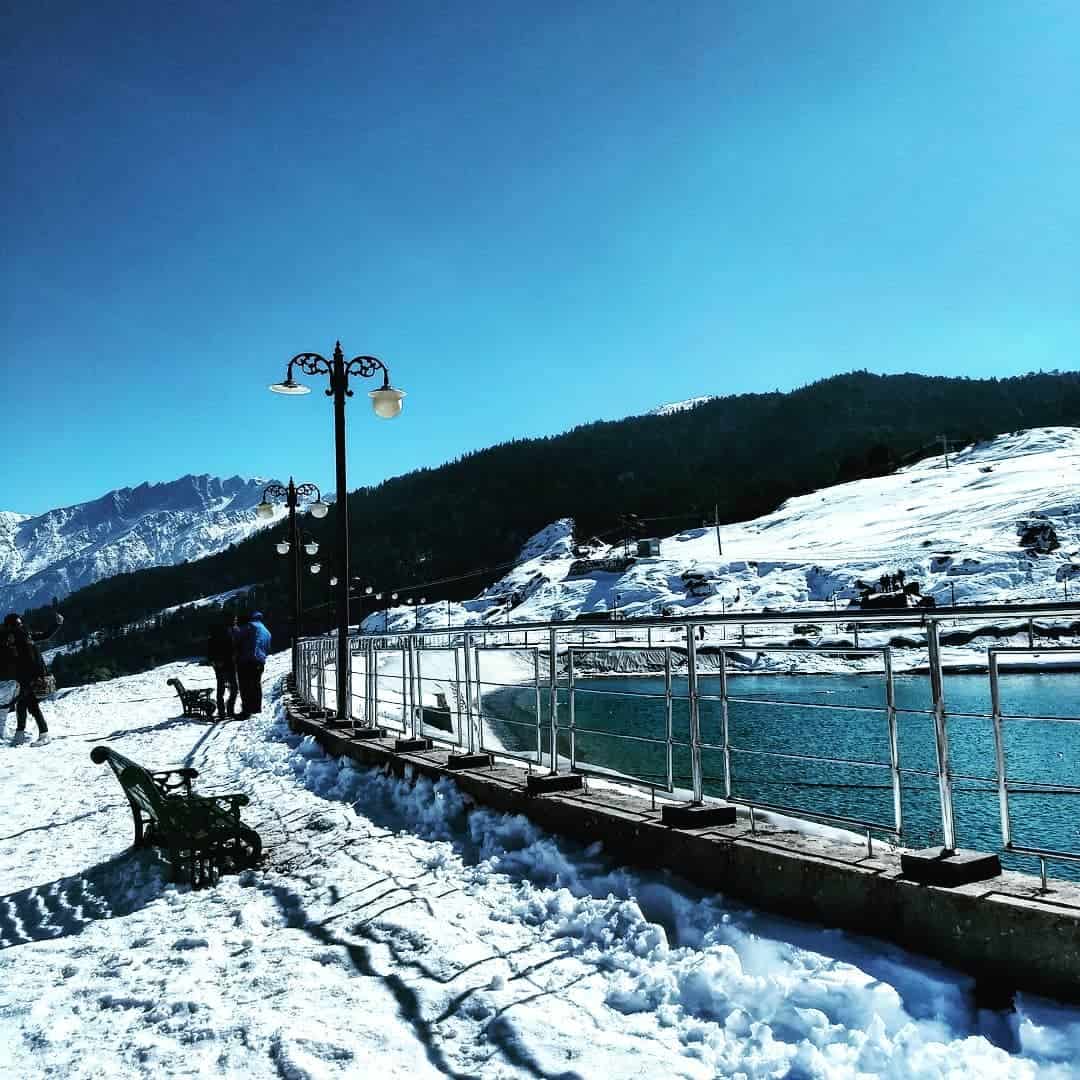 The beautiful town of Auli. Photography by Anmol Rikhra

My Journey Along the Kuari Pass Trek

Each long journey begins with a single step. When it comes to trekking, each destination has its own significance. 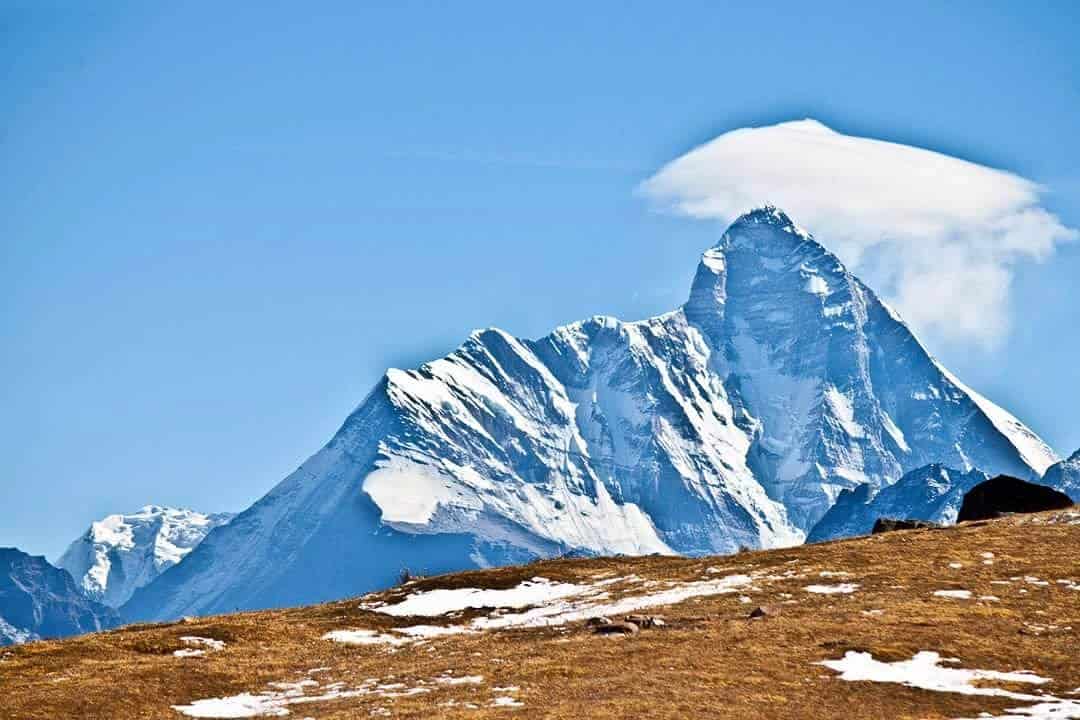 The ravishing Nanda Devi Peak as seen from a distance. Photography by Ravi Singh Rana

I reached Haridwar at 3:30 am. From here, we had to make my way to majestic Joshimath base camp for the first night.

I had time before heading to the Kuari Pass trek. So I decided to pay a visit to Har Ki Pauri.

Har Ki Pauri was covered in fog and strong cold winds that could blow anyone away.  Early morning in North India is chilly. However, this did not stop the devotees at Har ki Pauri to take a dip in the holy Ganges.

Ganga Arti starts at 6:30 am in case any website or person tells you otherwise ignore it. 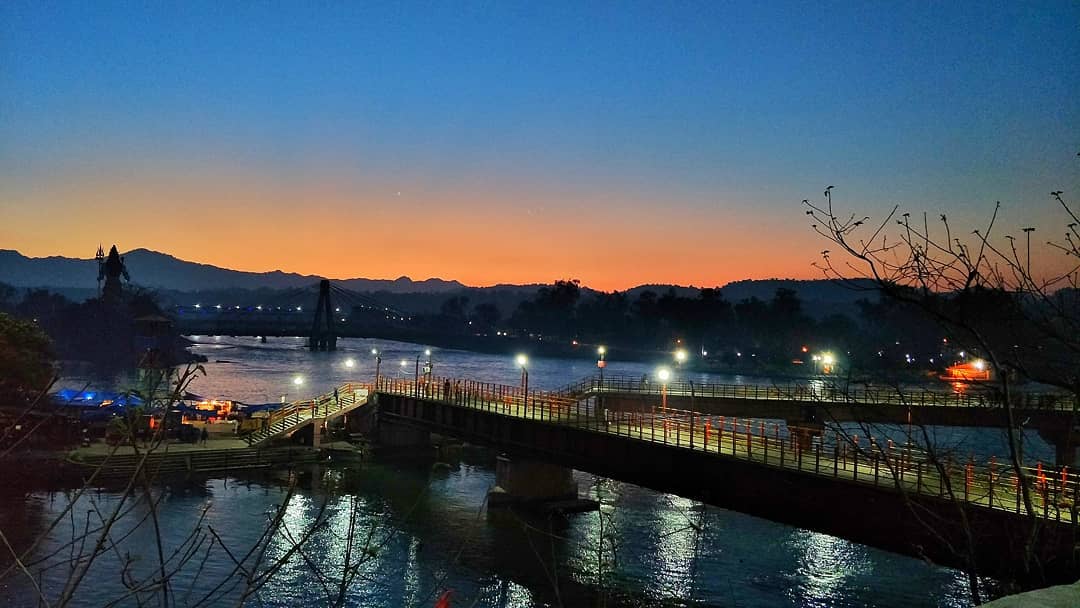 A company of 22 people left for an 11-hour journey to Joshimath. The view along the way made it seem like a fairy tale. The distant mountains looked majestic with snow-clad peaks hit by the first rays.

We made our way to the arrangements for the night stay. There were scrumptious snacks and welcome drinks for us followed by a good dinner and sweets. Lastly, we were made to undertake Oximeter and Pulse checks. 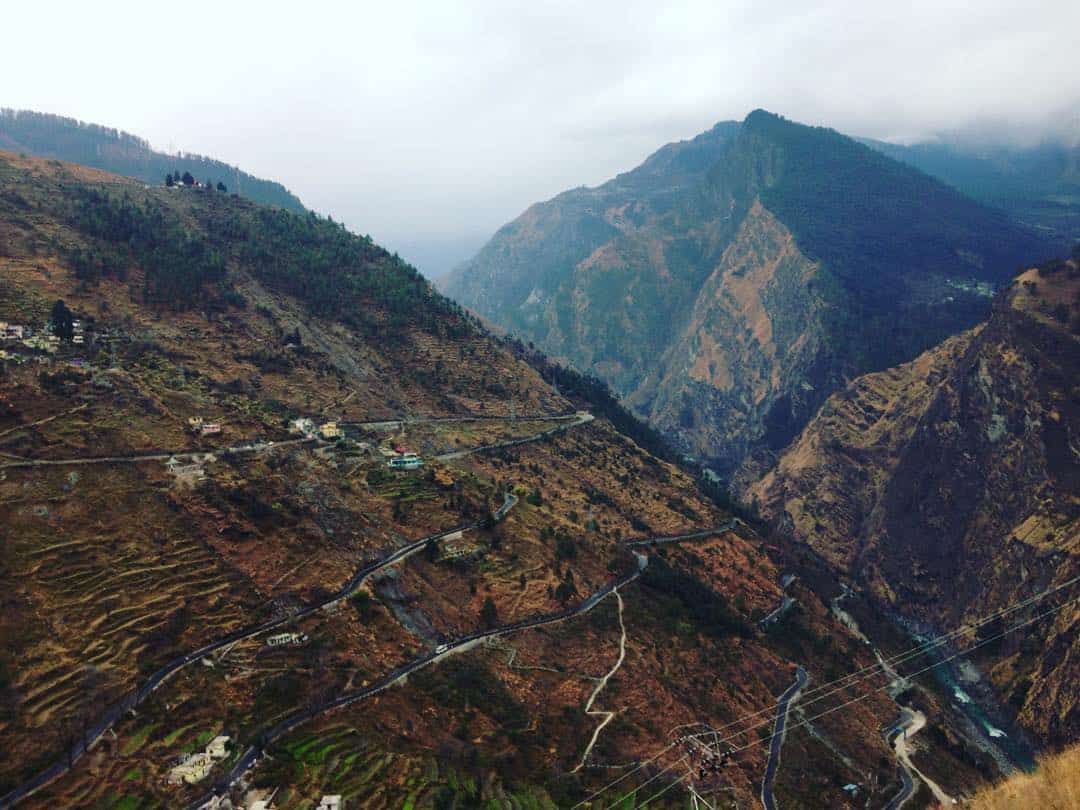 Joshimath from a distance. Photography by Francesca Daws

Dhak was the point from where we started the Kuari Pass trek. We didn’t follow the itinerary that is usually taken by people due to some unavoidable circumstances.

The initial stages are always the hard ones. The experienced trekkers knew how to deal with them. The rest of us were helped by the trek leaders.  Long strenuous walks were the order of the day. The mountain ranges with tall peaks could be clearly seen from the beginning. Some of the teammates struggled in stages. But all in all, we delivered a pretty impressive performance.

It took us 4 hours to reach our first camp – Akhrot  Geta. Fortune was with me as I was lucky enough to find the only Akhrot (walnut) from Akhrot Geta.  The base camp had figments of snow which seemed manageable. At a distance though we could see the snowy trail that we had to take the next day.

Breathtaking view of some of the major peaks – Hathi-Godha, Kamat, Dronagiri could be seen. Serenity could be felt by us.

In the following hours, instructions were given to us. They comprised of learning how to pitch a tent, about snack time, wearing warmers, tea time, dinner time etc.  After receiving instructions,  we finally had time to ourselves to play tent games. The best part was that almost the entire team joined in including a 60-year-old man. 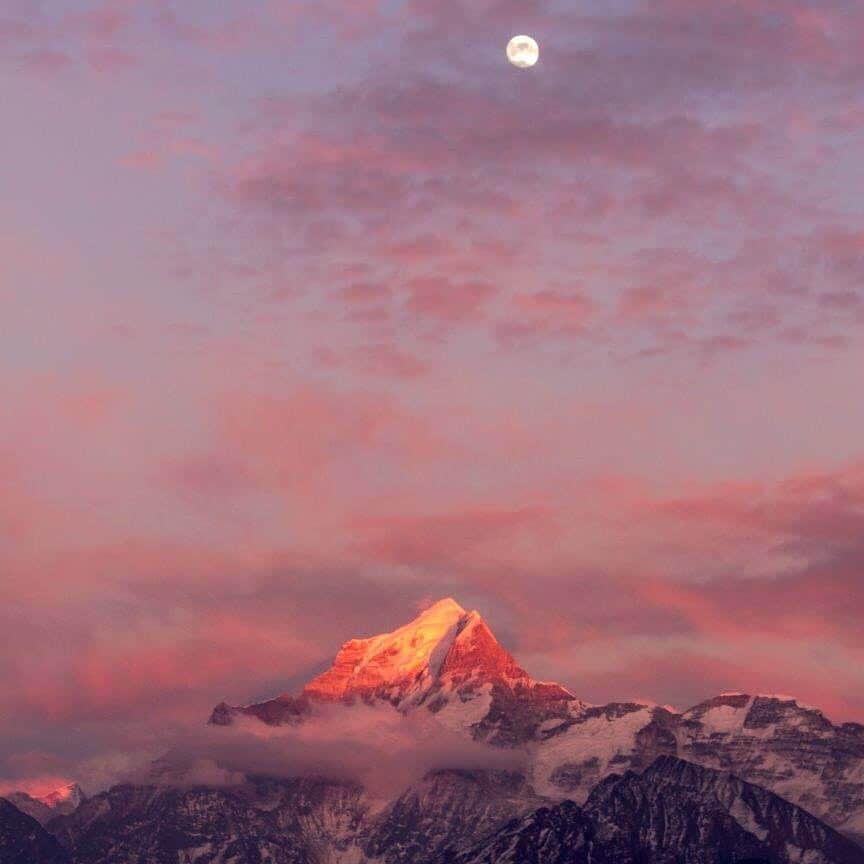 The dazzling Dronagiri peak at moonrise. Photography by Arun Singh

The next day was another early start but we didn’t have packed lunches for the day.  This meant the trek was even shorter than the previous day.  There were phases where we trekked on patches of snow but mainly the trek was on familiar terrain.

The level of difficulty was easier than the previous day but consecutive 2 days trekking took its toll on one of the trekkers. The gentleman was my tent mate. He made the basic mistake of not taking Diamox being a first-time trekker and not being used to high altitude.

His oxygen levels had dipped, the color of his face had faded, life seemed to be stuck out of his body. He was in immediate requirement of care when he reached the Khullara Base Camp. Supply of artificial Oxygen was required to put him through the night.

The rest of us went through the same chores as the day before. The highlight of the day was the time spent with 9 others (a group) to venture to a cliff, finding our own spot and spending quality time admiring the beautiful multi-coloured tents in white background complimenting the tranquil Himalayas. 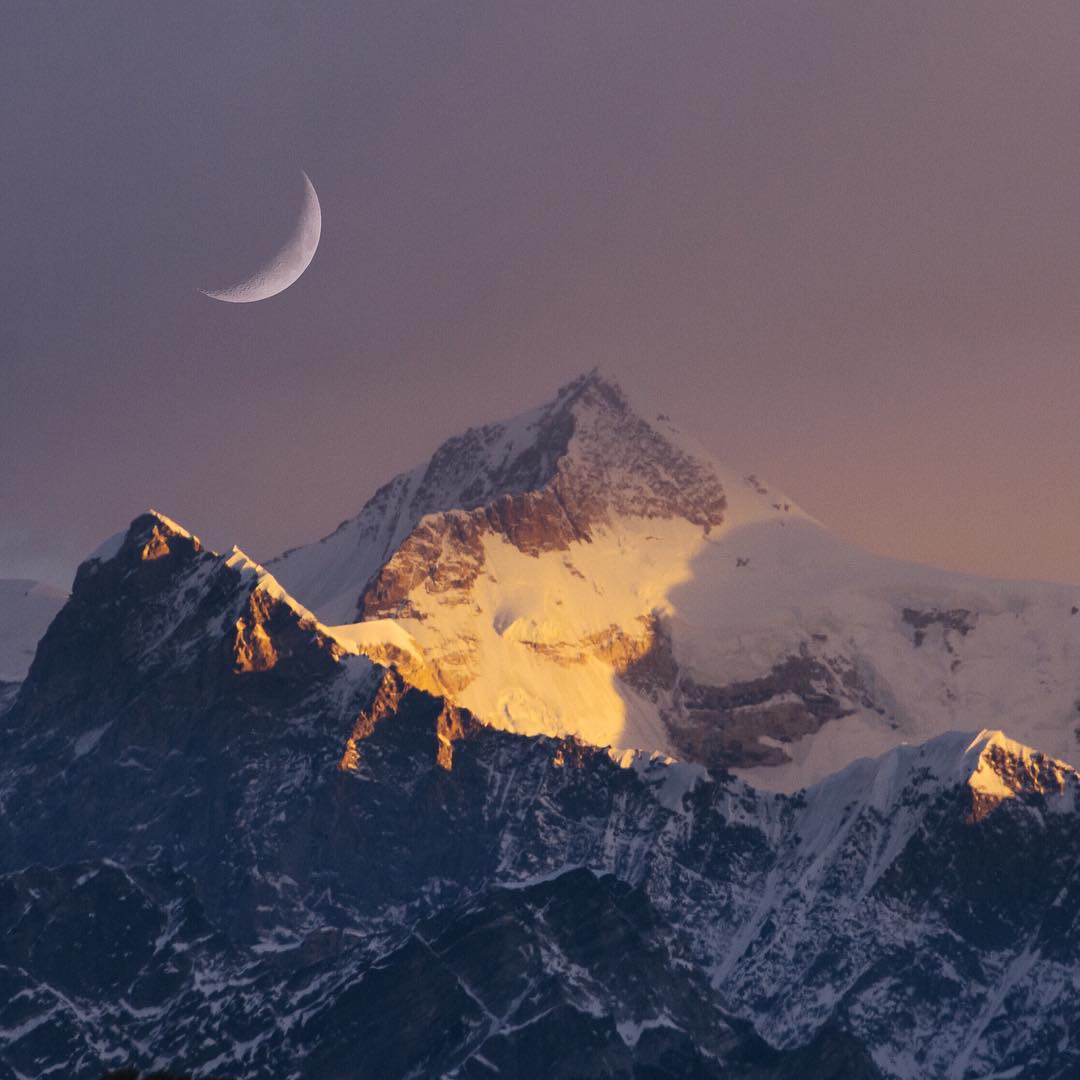 The next day started with bad news from the camp, unfortunately, our sick mate had to be sent down. We started off earlier than usual with microspikes attached to our footing. We were ready to face the steep snowy incline. Adrenalin rush hit me as from the end of the pack I was in the front of the pack in no time.

There was snow everywhere. We were leaving the mountain range that had us entrapped in its magic from the moment we started our journey. However, what was in front of us was even better – A panoramic view of the range. Group photos were the order of the day and this was the first one of the many that followed.

Kuari Pass grabbed us by the neck and let us loose as all that effort we had put in was to reach till this point. The weight on us was brought down and we were as relaxed as monks.

The relaxed mood after the achievement of completing the trek got reflected during the next day. We had our eyes set on the untouched Nanda Devi – the highest peak with a presence only in Incredible India.

There were snowflakes falling on us not from the skies but from a horizontal trajectory. Well, it was a snow fight!

The progress was slow and it was not due to the fun we were having but due to the 5 new joiners from the other batch who refused to complete the trek and joined us.

Nanda Devi’s top was all covered in mist.  It cleared with gushing winds for only a brief moment of time but I must say that the moment was worth the time.

This brief experience of observing the peak brought me some insight- “your goals might not be clear enough at first but those who are willing to continuously stride will achieve clarity in life and eventually success.”

From here, things weren’t as easy as they seemed. The slope wasn’t all downward. I had to bring a person from the other batch down in his bid to get back. This took a significant toll on me.

Eventually, we reached back but not before nightfall. So, the day that started out with all the fun turned out to be quite gruelling in the end. 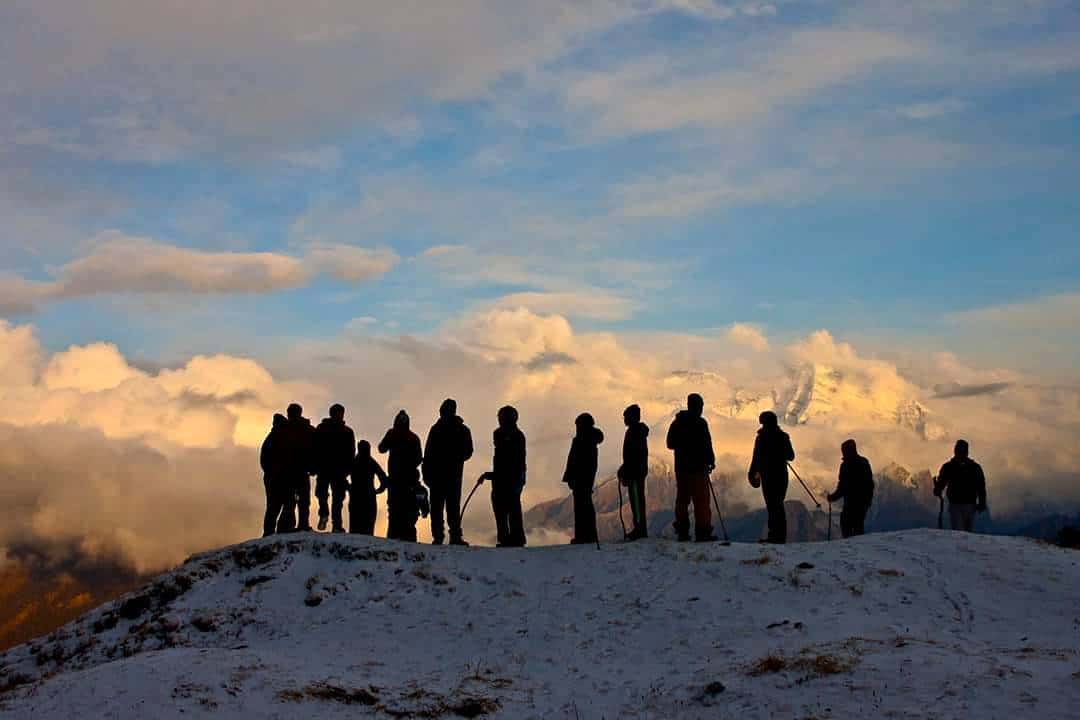 Every journey begins with a single step. Make sure you start your journey soon. Photography by Ravi Singh Rana

Kuari Pass Trek: Why I didn’t want to go back home?

Most of all, I didn’t want to leave the adrenaline rush that my body experienced so often as compared to the normal boring days.

I had a fantastic experience heading along the Kuari Pass trek. You should too. So pack your bags next season and sweat it out amidst the Himalayas. 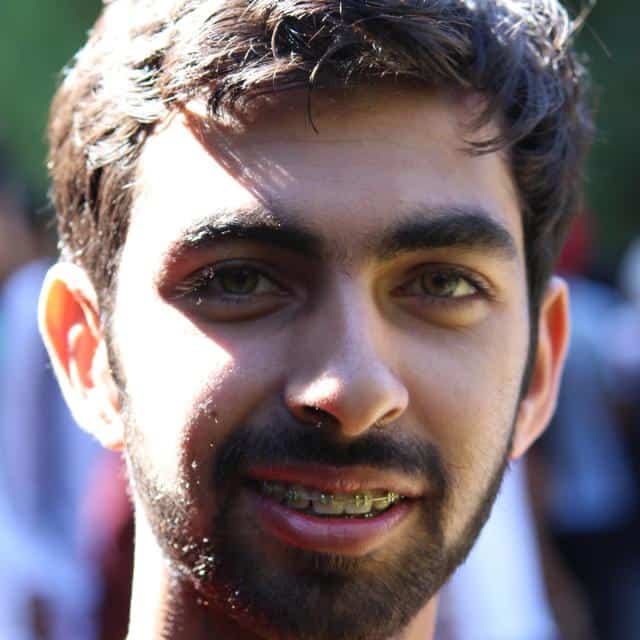 THIS POST ENTITLED ‘KUARI PASS TREK: THE BEST HIMALAYAN TRAIL FOR BEGINNERS’ IS AN EXCLUSIVE PROPERTY OF BUDGET WAYFARERS. ANY INDIVIDUAL OR ASSOCIATION INDULGING IN PLAGIARISM WILL BE DEALT WITH STRICTLY. IF YOU WANT TO USE INFORMATION FROM THE ARTICLE ABOVE, KINDLY QUOTE THE SOURCE.