The Boabeng Fiema monkey sanctuary is a wonderful mix of conservation, mystery and beliefs. It is home to two of the rarest monkey species in the world – Campbell’s Mona and the black-and-white Colobus.

As a gateway to Africa, Ghana boasts of a number of wonders that are visited by travellers from across the world. However, the monkey asylum continues to be one of the most unique, rare, and interesting places to visit in the country.

This sanctuary is nestled inside a forest, and has been created, protected, and looked after by the two adjacent communities – Boabeng and Fiema. If you’re visiting Ghana, this sanctuary ought to be part of your plan. 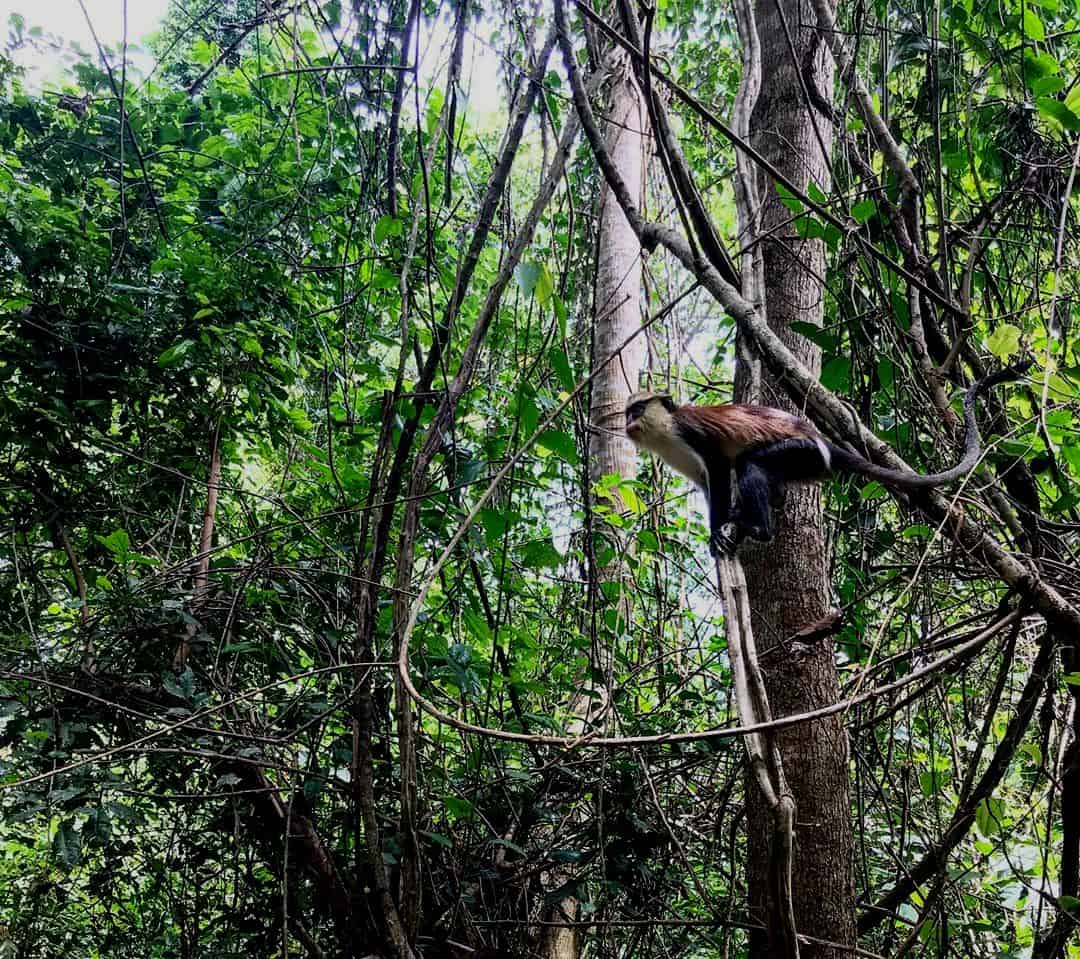 You can read all about what’s so special about monkeys in Boabeng Fiema Sanctuary, but witnessing the magic for real is different altogether. There was an eerie feeling about being in the sanctuary. It definitely tickles the human psyche.

The Boabeng Fiema Monkey Sanctuary came into existence in the 1970s.  I was informed that this 4.4-kilometre square forest was home to more than 700 monkeys. Other than the two sacred species, the sanctuary also houses other monkey species including the vervet and patas monkey, several birds, reptiles and deers.

I had a real good

Before I go into the details of my trip to this splendid place, here are a few things that will help you understand the destination better:

So, what’s the deal with this sanctuary and why’s it so popular? The 2 species of monkeys found here are definitely exotic, but there’s more to it. In addition to being rare, they’re considered to be sacred by the villagers. And no, this is not a gimmick to attract tourists. I was psyched to hear the story behind it.

What’s the Deal with the Monkeys?

As I had expected, there are different versions of the story. However, the most popular one goes somewhat like this.

Several years ago, a hunter from Boabeng went hunting in the forest. Out of nowhere, he noticed a fetish Daworo (fortune teller for the gods of the village) surrounded by a troop of monkeys.

Note: A fetish is an object that’s worshipped because of its supposed magical/spiritual powers.

He did not shoot any of the monkeys, despite really wanting to. It almost felt as if he was hypnotized by them. Intrigued by this sight, the hunter decided to bring the fetish home. The monkeys watched all of this and started following him to his hut.

The villagers were fascinated and decided to consult a shaman. The shaman told them of the special relationship between the fetish and the troop of monkeys. Apparently, the monkeys were offsprings of the fetish Daworo.

It was following this very incident, that the monkeys were declared sacred. Consequently, no harm must be done to any of them, and they must be treated supremely.

It is also said that the fortunes of the hunter grew with time. This is attributed to the magical powers of the fetish and the monkeys.

It all sounded creepy to me, but almost every belief was validated by an anecdote. Maybe, the monkeys really are sacred.

Protection for the Monkeys

The belief in the sacredness of the monkeys did not dwindle over the years.

In 1971, a native of Boabeng thought of having the Boabeng Fiema Monkey sanctuary protected. Meetings were set up between the elders of the 2 villages. He also wrote letters to the Department of Game and Wildlife of Ghana.

Finally, officials agreed to the villagers’ requests, and the sanctuary was started in 1974. Ever since monkeys and villagers have co-existed happily.

Locals believe that when a group of the black-and-white Colobus monkeys emits a weird sound between 11 PM and midnight, an elderly from either of the 2 villages will die. 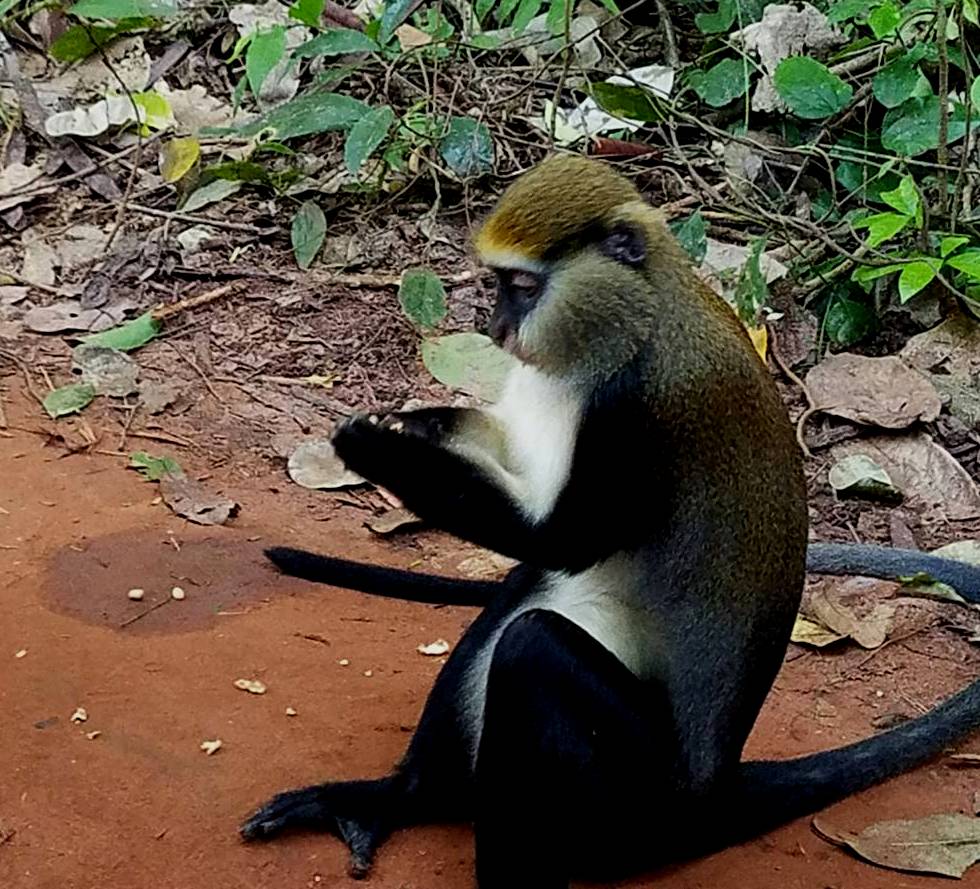 I wouldn’t believe any of this in a general scenario. However, being so close to the villagers and seeing how closely their lives were tangled with the monkeys’, I couldn’t help but believe in it. Visit the sanctuary and experience it for yourself!

There has undoubtedly been an emotional get along between both parties – the monkeys and the inhabitants of the villages. This is an extraordinary connection and has only gotten stronger over the years. 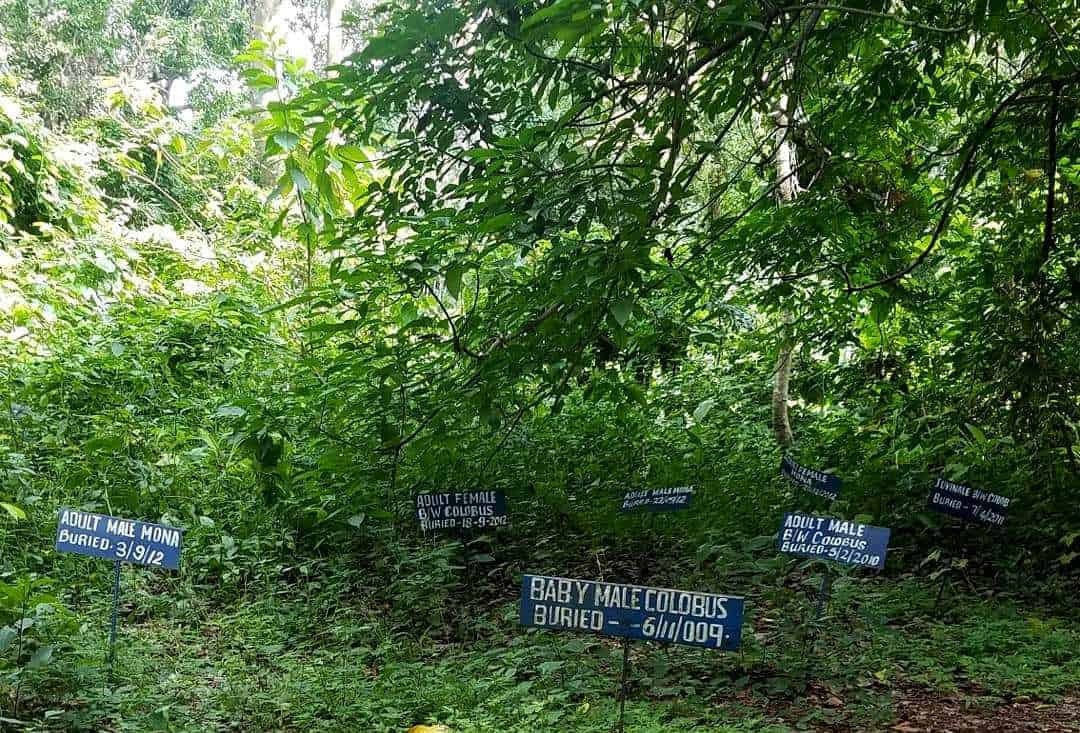 No distinction is made between monkeys and human beings here. The only difference is that monkeys are placed on a much higher pedestal. Each monkey has its own grave with inscriptions of which species it was, and when it died. Weird, right?

There ought to be something special about the monkeys if this is how especially they’re treated. This sanctuary has attracted the interest of various research groups, and I now understand why.

In this section, I’ll offer all the other details you’d want to know about your visit to the Boabeng Fiema monkey sanctuary.

For what the sanctuary has to offer, the fee is next to negligible.

Note that there will be a separate fee charged for photography and videography. However, the fee is really small.

The sanctuary is open through the week. However, Fridays are supposedly an interesting day to visit. This is because Fridays are observed as a special day for monkeys in Boabeng and Fiema. People from the villages do not go farming and some even hold special rites.

Lastly, whatever day you’re visiting on, try making it to the sanctuary in the morning. This is the monkeys’ mealtime, and you will get to feed them and see them in big numbers. So, try reaching the forest around 8 AM.

The monkeys of Boabeng Fiema Monkey Sanctuary are extremely sociable with visitors and inhabitants.

When it comes to food, the monkeys of Boabeng Fiema Monkey Sanctuary have nutritional preferences. The Mona monkeys and the Western black-and-white Colobus have dissimilar tastes.

There are also a few signs across the sanctuary that request you to not feed the monkeys and to simply observe them. So, when you visit the sanctuary, make sure you clarify this with locals and your guide.

Note: You can find a well-experienced and well-trained guide right at the entrance.

There is no strict dress code that you must follow when you visit the Boabeng Fiema monkey sanctuary. However, keeping in mind existing cultural taboos in the region, it would be better not to dress modestly.

As a piece of advice, both men and women must wear bottoms that are knee-length or longer. Additionally, women must try to have their shoulders covered.

Spending a night in and around the sanctuary would be a great idea. This is especially relevant for those who reach the destination late. Fortunately, there’s a well-furnished rest house provided by the sanctuary itself.

Charges are somewhat as follows.

In case the guesthouse is booked out, there are other alternatives available on Airbnb. Either way, finding a reasonable place to stay the night won’t be difficult.

Apart from the wonderful memories and tales told by your guide, you can take back bottles of local honey from the sanctuary. These are cheap, and on sale right at the entrance. In case you’re interested, you can also check out the crafts shop.

Commuting in Ghana is not as easy in a lot of other countries. That being said, it’s definitely interesting, challenging, and adventure-filled.

Now, let me be honest. The Boabeng Fiema monkey sanctuary is not the easiest place to get to. Most blogs and websites will advise you to rent a taxi, get to the sanctuary, explore, and take the same taxi back to where you came from, or your next destination.

However, this might turn out to be an expensive choice if you’re travelling solo, on a budget, or both. So, let me offer you the best and the cheapest way to get to Boabeng Fiema monkey sanctuary, irrespective of your starting point.

Techiman is a big town in the central region from Ghana and lies about 35 kilometres from the sanctuary. Now, you might be in Accra, or Cape Coast, or Kumasi. These are some of the major cities spread across different parts of Ghana.

Irrespective of where you are, you need to board an STC (State Transport Company) bus that will take you to Techiman. Note that there’s no bus with Techiman as its destination. Instead, board a bus that goes to Tamale – Techiman falls on the way. These buses are priced somewhat like this:

Remember to tell the driver you want to get off at Techiman. Chances are that there will be other travellers getting off here too.

Tips for Bus Travel in Ghana:

What time you reach Techiman at, depends on the time you board the bus and where you’re coming from. In case you reach late (after sunset), it would be a good idea to stay here for a night. There’s a number of cheap hotels, lodges, and guesthouses you can choose from.

The last leg of your journey would involve taking a tro tro from Techiman to the sanctuary.

A tro tro is sort of a shared minivan and a popular means of transport for both locals and travellers in Ghana. It is also popularly known as the cheapest commute option in the country.

Ask any local and head to a tro tro stop in Techiman. Here, you’ll find a tro tro to take you to the Boabeng Fiema monkey sanctuary for about 5-6 GHC (roughly 1 USD). The journey should take an hour if all goes well.

Tip: Do not expect luxury and comfort in your tro tro ride. Most of them are crammed and built in a way to maximize the number of passengers it can carry.

However, it’s going to be a short journey. So, embrace it. It will certainly make for one hell of a story to tell your friends and family. 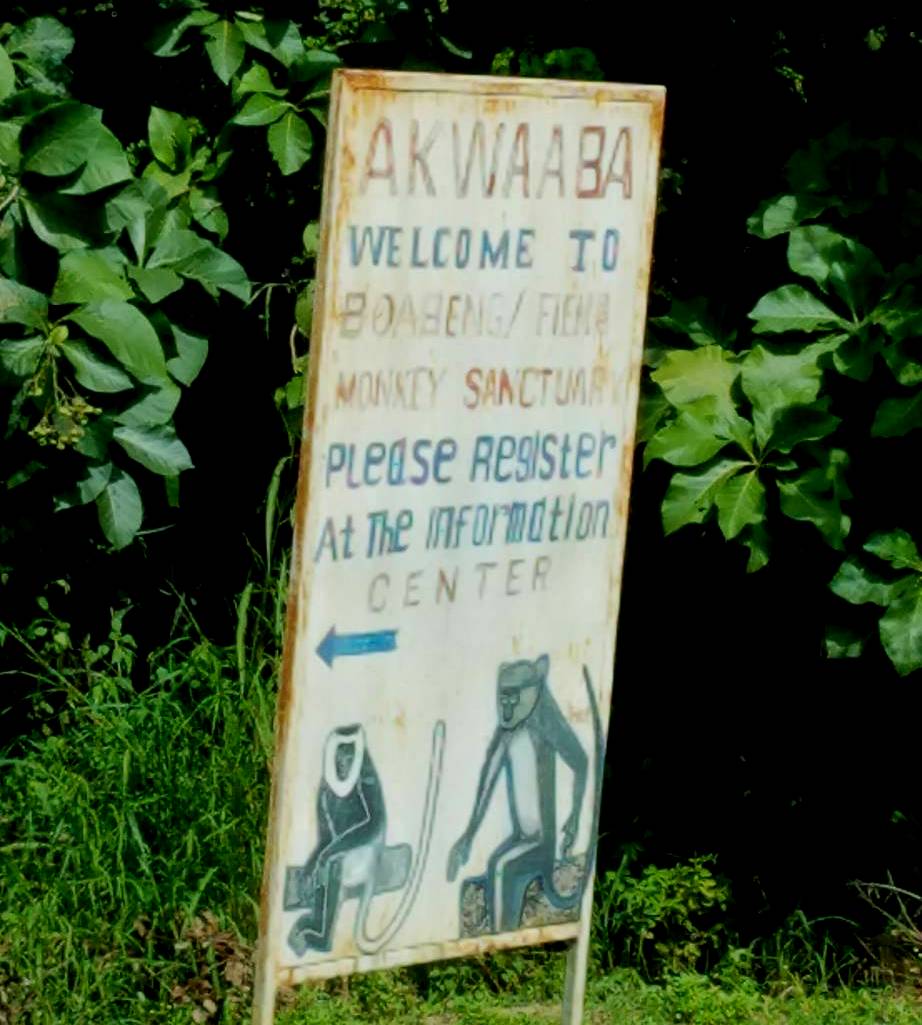 It’s going to be a long journey but trust me when I say this, it’s going to be worth it. The satisfaction you’ll feel when you see this board will be absolutely priceless. And after all, how’s a journey fun without some adventures worth remembering?

Boabeng Fiema monkey sanctuary was one of those places that lived up to my expectations. At every point of my trip, I was awestruck and filled with amazement. That’s the power of this place – it makes you want to believe in things you never thought you would.

When you visit Ghana, you simply cannot miss out on the Boabeng Fiema monkey sanctuary – after all, it’s one of a kind. 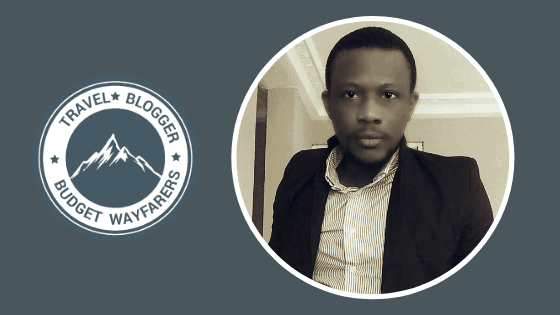 Osei Agyemang Richard is a calm, passionate and creative writer. He is an expert in composing innovative content. He is a passionate travel enthusiast who likes to visit interesting places around the world. Additionally, Osei is an award-winning national artist and the founder of Rab Investment Ltd.-An auto pre-finance firm.