Shirdi, Shani Shringnapur, Panchvati and Trimbakeshwar are Maharashtra’s top 4 holy shrines that are visited each year by thousands of people having faith in the almighty. The state has numerous religious sites and pilgrimage places for distinct faiths.

Shirdi & Other Shrines in Maharashtra: Locations 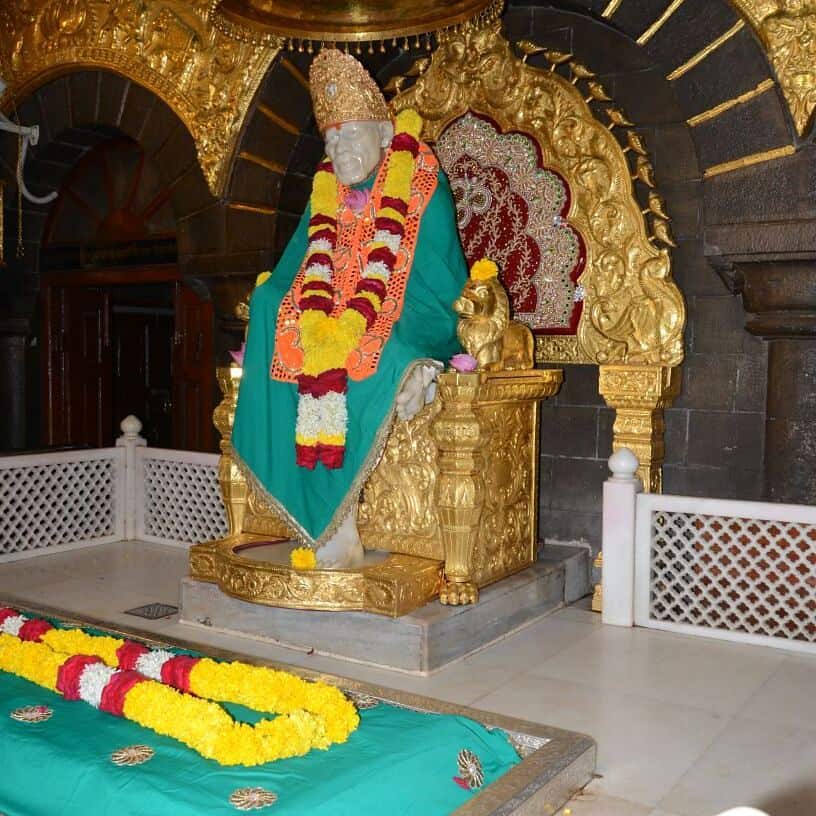 The Sai Baba Temple at Shirdi. Photography by Sonia Kadam

Among the popular pilgrimage sites of Maharashtra, Shirdi is considered to be an important pilgrimage place in India as sage Sai Baba lived here till his death. It is a small village in Kopargaon Taluk, in Ahmednagar, Maharashtra and it is located about 285 km from Mumbai. After Baba’s death, his fame spread across the world. Sai baba believed and respected all religions equally. Samadhi Temple was started during the lifetime of Sai Baba, with the motive of having a temple of Sri Krishna. But afterwards, Baba himself decided to live there. So, after Baba attained Nirvana (eternal peace), his mortal remains were buried at that place.

The articles and belongings, which were used by Baba, are exhibited in a room here. Last month, I got a chance to visit this beautiful holy place. It was a Saturday that I found myself in Shirdi and standing in that long queue to get a sight of the popular ‘Shirdi wale sai baba’. The view of Sai baba’s idol was breathtaking. The facial carve of baba’s idol is almost realistic and it would stun you for a moment. The Samadhi is placed in a big hall. One can touch and bow to Samadhi and offer prayers.

Where to eat in and around Shirdi?

There is a ‘Prasadalaya’ which is run by the administrative body of the Shirdi temple. It provides food to all the devotees. Sanctified food packets (called ‘Prasad’) are given in food packets to the devotees throughout the day. 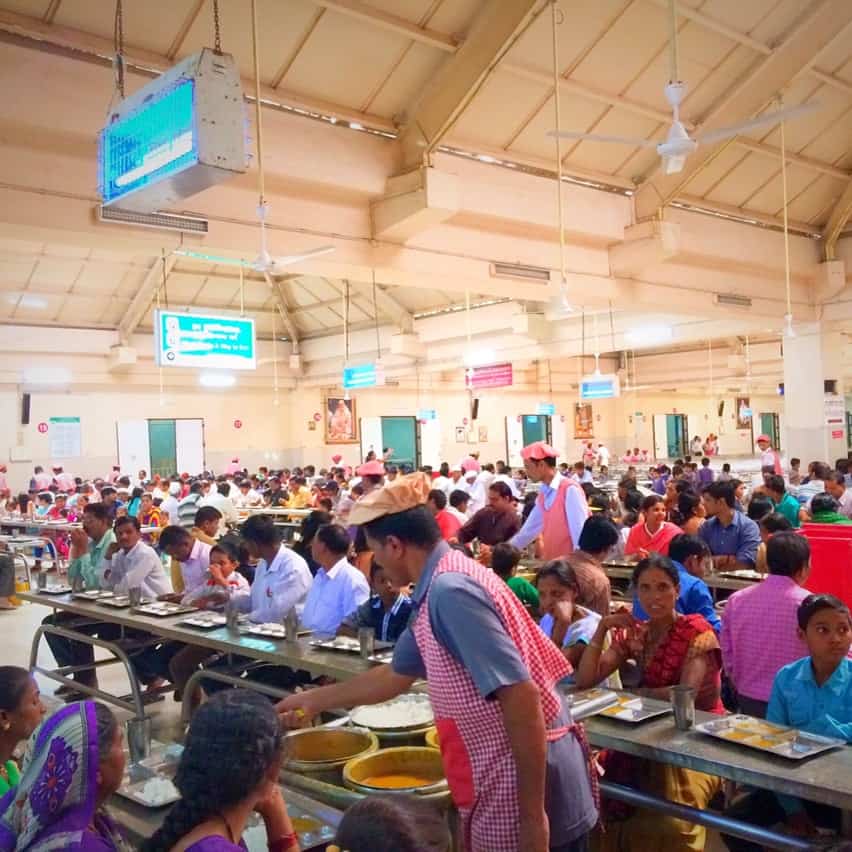 The Prasadalya provides food to thousands of devotees daily

With its delicious dishes, The Vegan Café lures a lot of travellers. The staff here is very friendly and you don’t need to wait for a long time to grab your delicious food. The ambience of this café is very soothing. If you want to relax then this place is for you.

This restaurant is situated at a distance of around 8 km from Shani Shringnapur. They offer authentic local cuisine which has original and delicious taste. 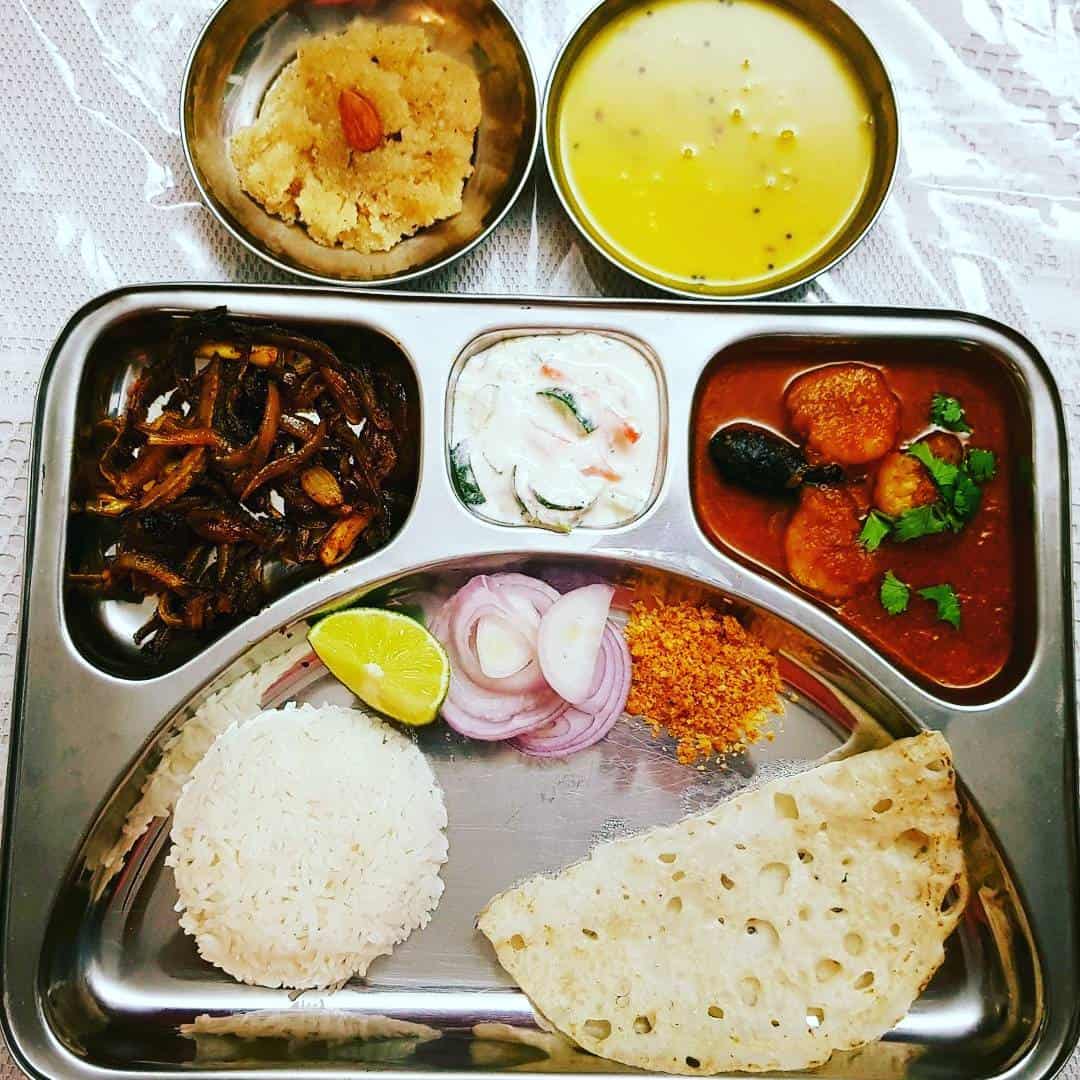 Where to stay in and around Shirdi?

The New Bhakta Niwas is the biggest accommodation complex comprising 542 rooms of various categories. It is about 1 Km away, on the south of the Mandir Complex, on the Highway itself. Free bus service, shuttling between the New Bhakta Niwas & the Mandir Complex is provided round the clock. This complex is well equipped with the parking space, canteen facility, 24 hr water and electricity supply and the security. It is equipped with a solar hot water system.

The Dwarawati is just around two minutes’ walking distance from the bus stand. It is built recently in the year 2008. It has around 334 rooms & dormitories & large rooms to accommodate small groups or families of six to ten people. It also has 80 AC rooms. This complex is also well equipped with the facilities like the parking space, 24 hr water supply, electricity supply & security. Sansthan is taking care of the common devotees by providing accommodations at affordable prices. A simple room with common facilities is available merely at the charge of Rs. 50/-, which can accommodate four persons. And the AC rooms are also available at the charge of Rs.900/- per day.

I really enjoyed my trip to Shirdi. I can say that it’s pretty affordable. 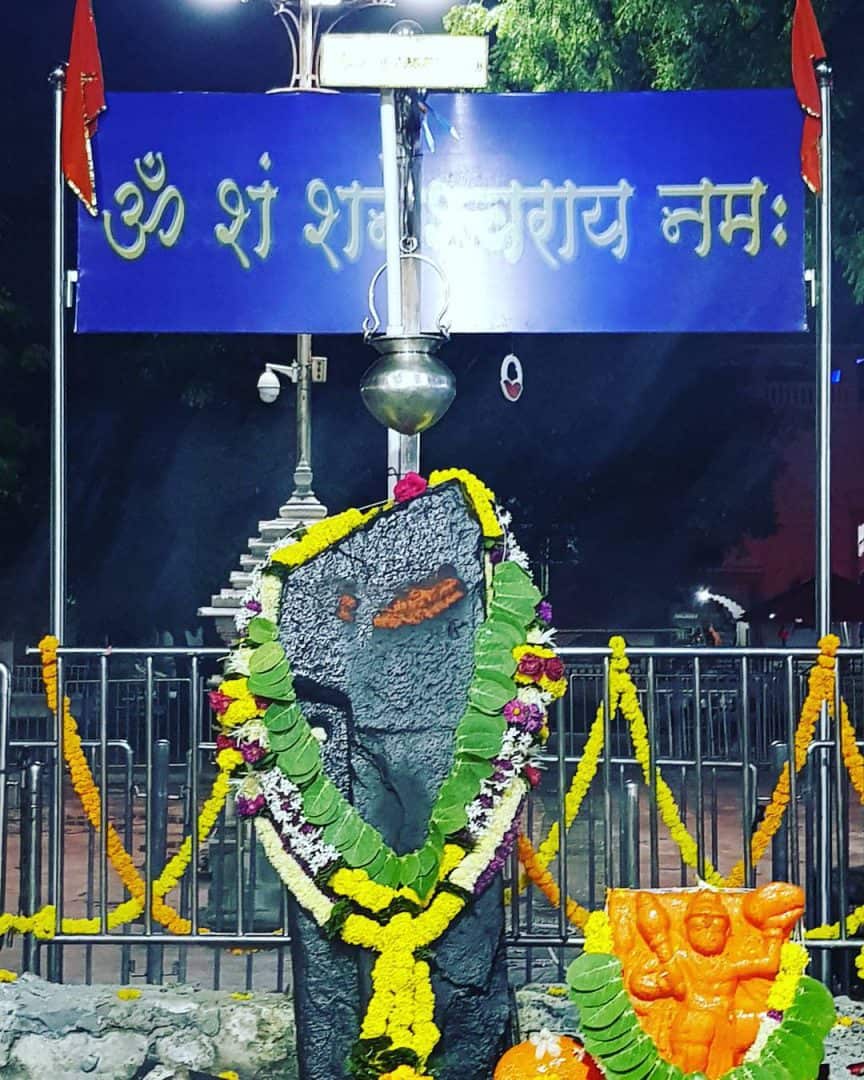 After spending a day in Shirdi, my pilgrim progresses to Shani Shringnapur. Shani Shringnapur is located at a distance of around 70 km from Shirdi and legend has it that there is not even a single shop that has shutters or locks and not even a single theft has been reported in this village so far. Shringnapur is famous for Shani temple and pilgrims visiting Shirdi usually take out time and make a day trip to the Shani temple to seek blessings.

How to reach Shani Shringnapur from Shirdi?

One can easily get transport from Shirdi to Shani Shringnapur and vice-versa. You can easily find many jeeps that ply devotees between the two temples. If you don’t want to travel via jeep then you can also hire a private cab or else bring your own vehicle. As you enter Shringnapur, there are a lot of people who try to divert your mind to take you to this and that etc. It’s really very disgusting how they grab money in the name of god.

Panchwati is truly a beautiful place. Panchwati got its name from the five banyan trees present in the vicinity where Lord Ram and Sita spent their exile period. There is also a story behind the name ‘Nasik’. It is believed that Laxman (brother of Lord Ram), cut off Shupernakha’s nose and throws it on another side of the Godavari river. Thus on one side of the river, there is Nasik while another side where five banyan trees are present is known as Panchwati. There are few places to see in Panchwati such as Ramkund, Kalpaleshwar temple and Sita cave i.e. the cave which is believed to be where Devi Sita stayed to hide from demons. Panchwati is usually coverable in 1 km. So, one usually doesn’t need a guide to wander in Panchwati. 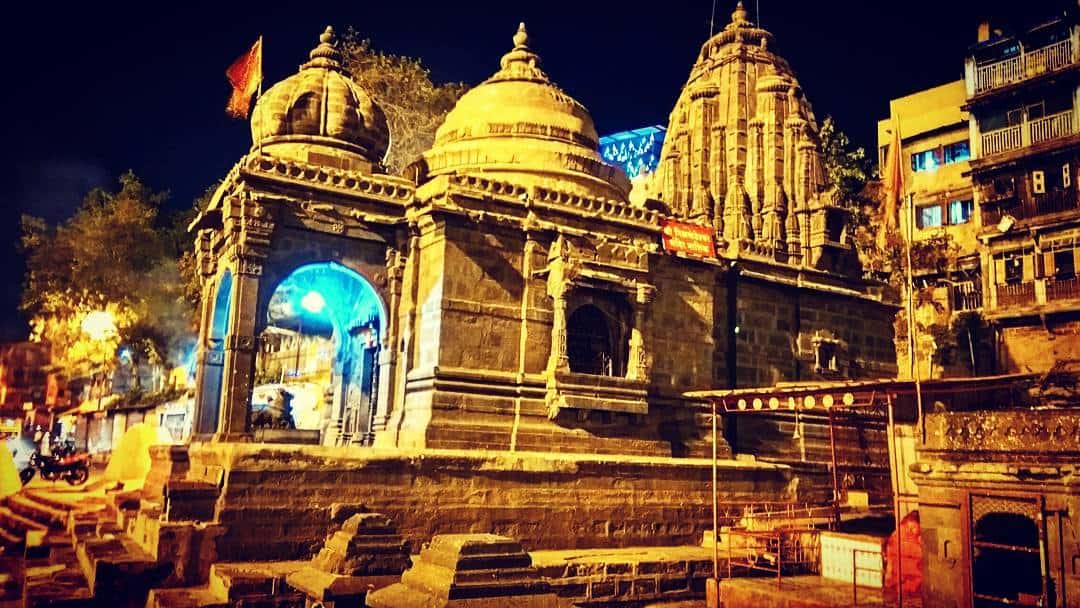 Trimbakeshwar is one of the holiest and most sacred places for Hindu pilgrims. It is among one the 12 jyotirlinga shrines of Lord Shiva in India. The temple lies in the foothills of Brahmagiri Mountain which is also a place of origin of river Ganga. The presence of 3lingas each representing Brahma, Vishnu and Shiva is the most attractive part of this temple. I have only a phrase to describe the beauty of Triyambakeshwar temple i.e. “Black Beauty”. 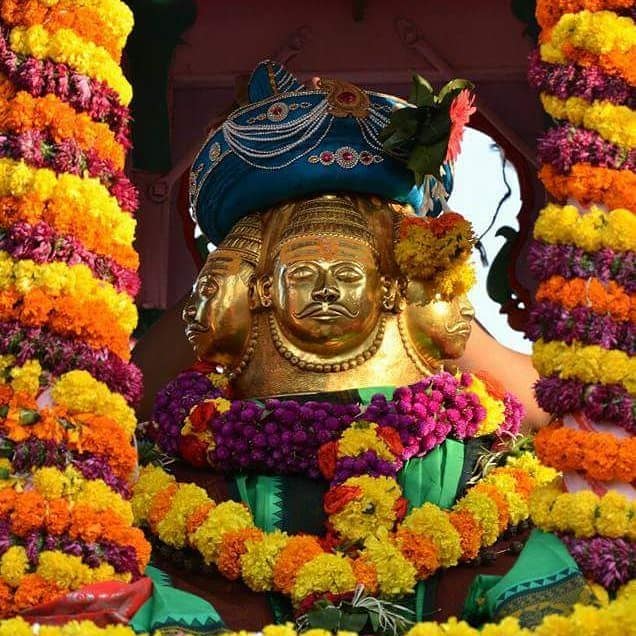 Adventure lover by nature, Bhavna Sharma loves to travel and explore new places. She is basically from the birthplace of Lord Krishna – Mathura and is currently settled in New Delhi. A B.Sc (Hons) Physics graduate from Delhi University, Bhavna has received various scholarships for excellence in education. She also happens to be a freelancer for various industries – travel, food and fashion. Loves to sing and read romance novels. She believes in living life to the fullest and roams around the world and collects memories.

THIS POST ENTITLED, ‘HOW TO SPEND A FUN DAY AT SOLANG VALLEY’ IS AN EXCLUSIVE PROPERTY OF BUDGET WAYFARERS. ANY INDIVIDUAL OR ASSOCIATION INDULGING IN PLAGIARISM WILL BE DEALT WITH STRICTLY. IF YOU WANT TO USE INFORMATION FROM THE ARTICLE ABOVE, KINDLY QUOTE THE SOURCE