Mehrangarh Fort is one of Jodhpur’s finest embodiment of Rajput architecture and heritage. The fort at Meharangarh stands tall on a cliff, exactly perpendicular to the ground. This makes it scale up four hundred feet above the skyline of Jodhpur. Jodhpur is located in India’s most westward and largest state –  Rajasthan. The word Rajasthan signifies the land of kings.

Right from the ancient palaces to the vast desert land, from the folk outfits to the contemporary festive dresses, from the native music to the traditional food, it is indeed a must-visit place. The state holds pride in being a culturally rich region. One simply cannot miss the red coloured saris as well as the multi-coloured turbans of the local people. 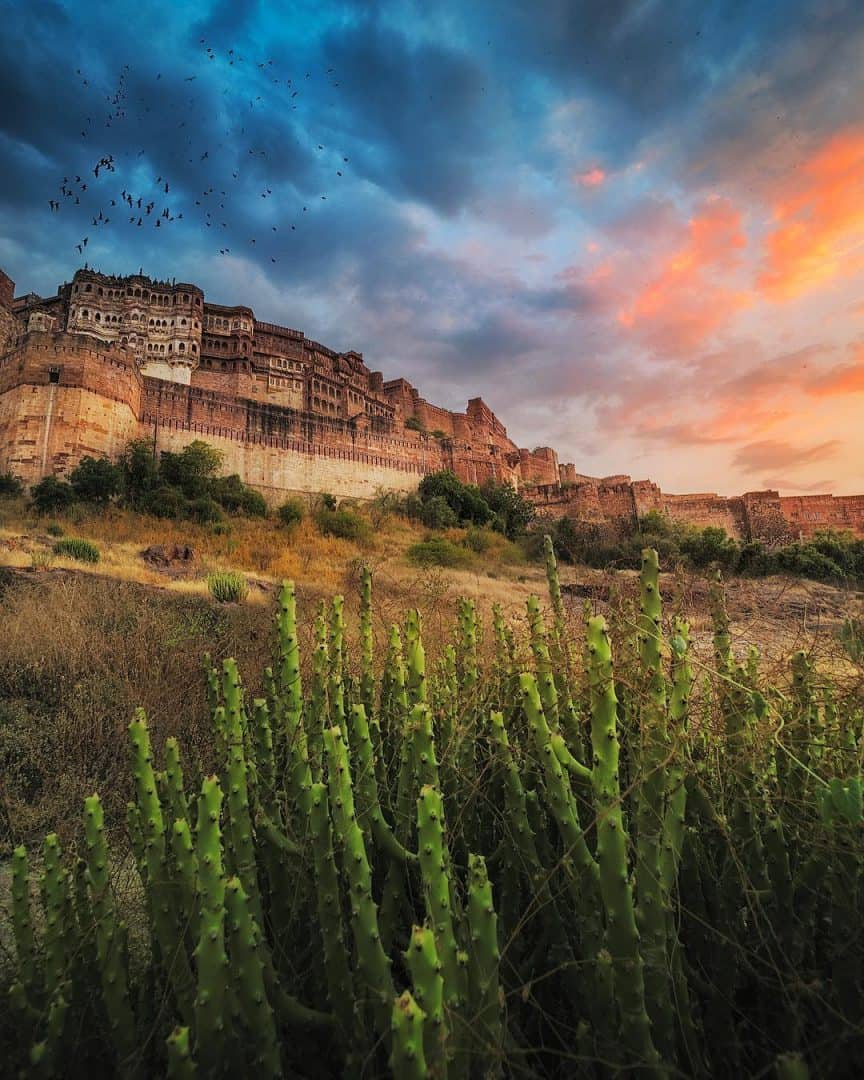 The ancient Mehrangarh Fort resting on a cliff. Photography by Bobby Joshi 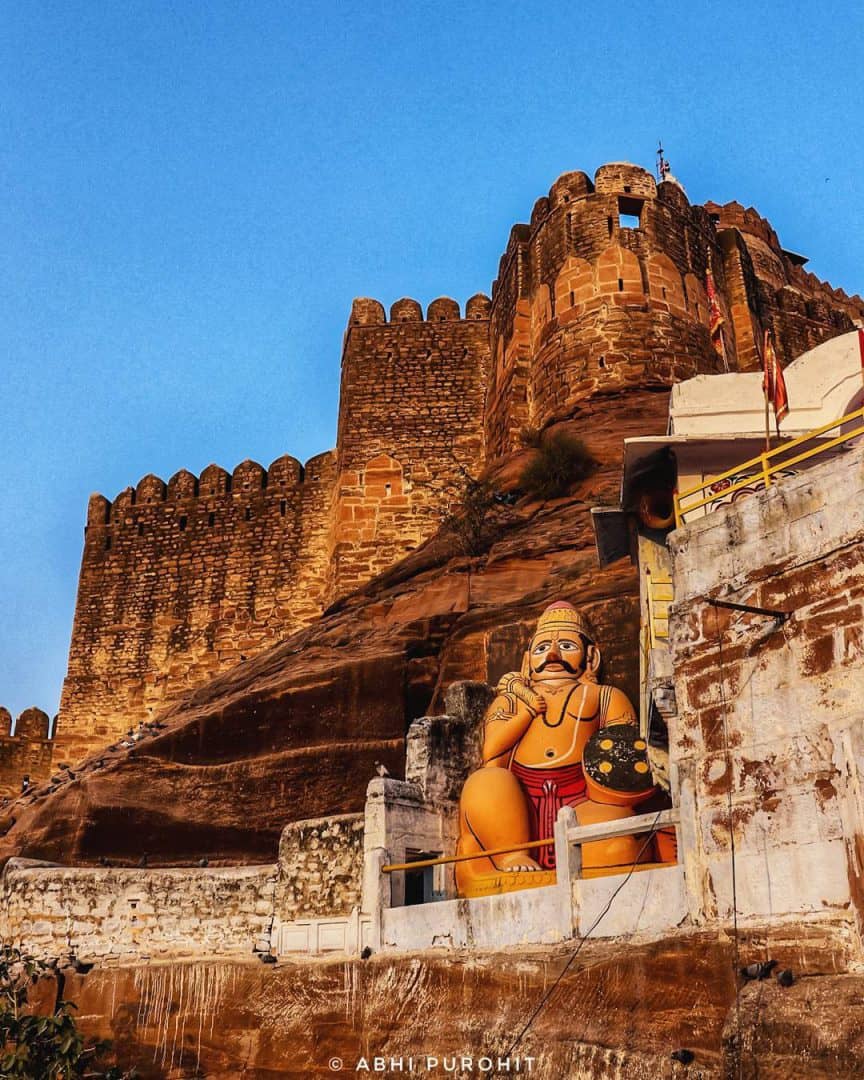 While in Jodhpur, visit Mehrangarh Fort. Photography by Abhi Purohit

Jodhpur is the second-largest city in the state of Rajasthan. The city no doubt benefits from the astounding architecture which is built in a bright shade of blue and thus the city is popularly known as the blue city. The city not only provides glorious forts but also with eye pleasing lakes.

One can experience the splendid view of the blue city from the Mehrangarh fort. It is known for its explicit architecture and very strong historical background. The enormous structure stands tall in the city for more than 500 years now. The museums in the fort take you on a journey to the golden era. 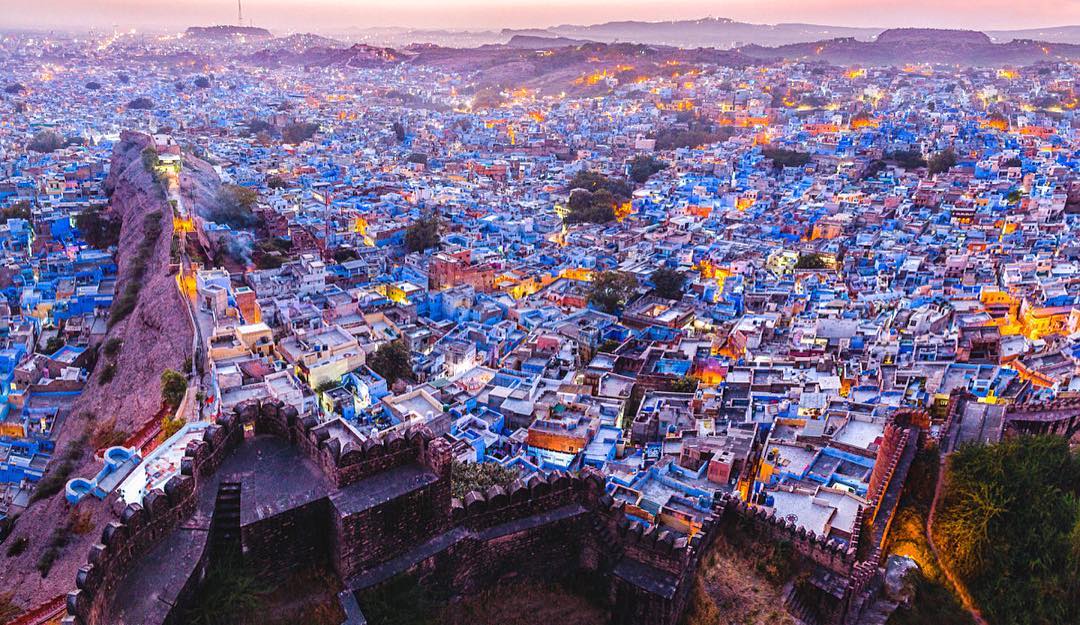 How to Reach Mehrangarh Fort?

Jodhpur being closed to called a metropolitan city has its own domestic airport. One can also take a train as it is well connected to the major cities in the region. A journey by bus on the road can also be availed. Traveling via bus or train will ensure picturesque sights along the way. So make your travel pick wisely. 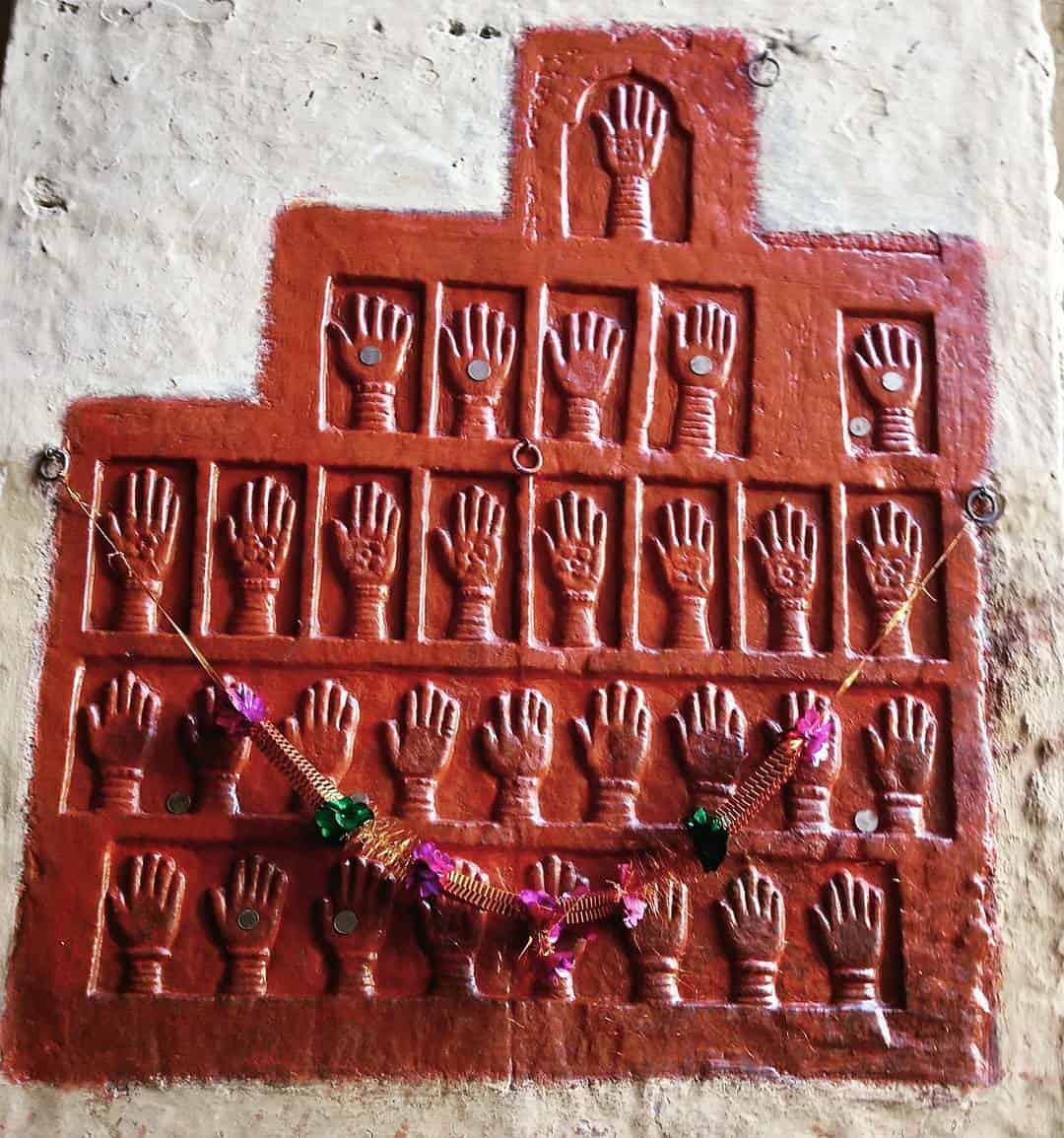 This is symbolic of the Queen and several other women who made great sacrifices during the war. Photography by Sandeep Singh Sikarwar

Mehrangarh fort is one of India’s largest forts. This enormous structure was built by Rao Jodha in 1460. It is bounded by thick walls enclosing many other heritage palaces. On entering the Mehrangarh fort you’ll find prominent imprints of cannonballs on the walls and mesmerizing folk music played by the local artisans giving. This gives a first-time traveller an extremely royal feel. This ancient fortress has seven gates of victory. The carving on them is intricate. 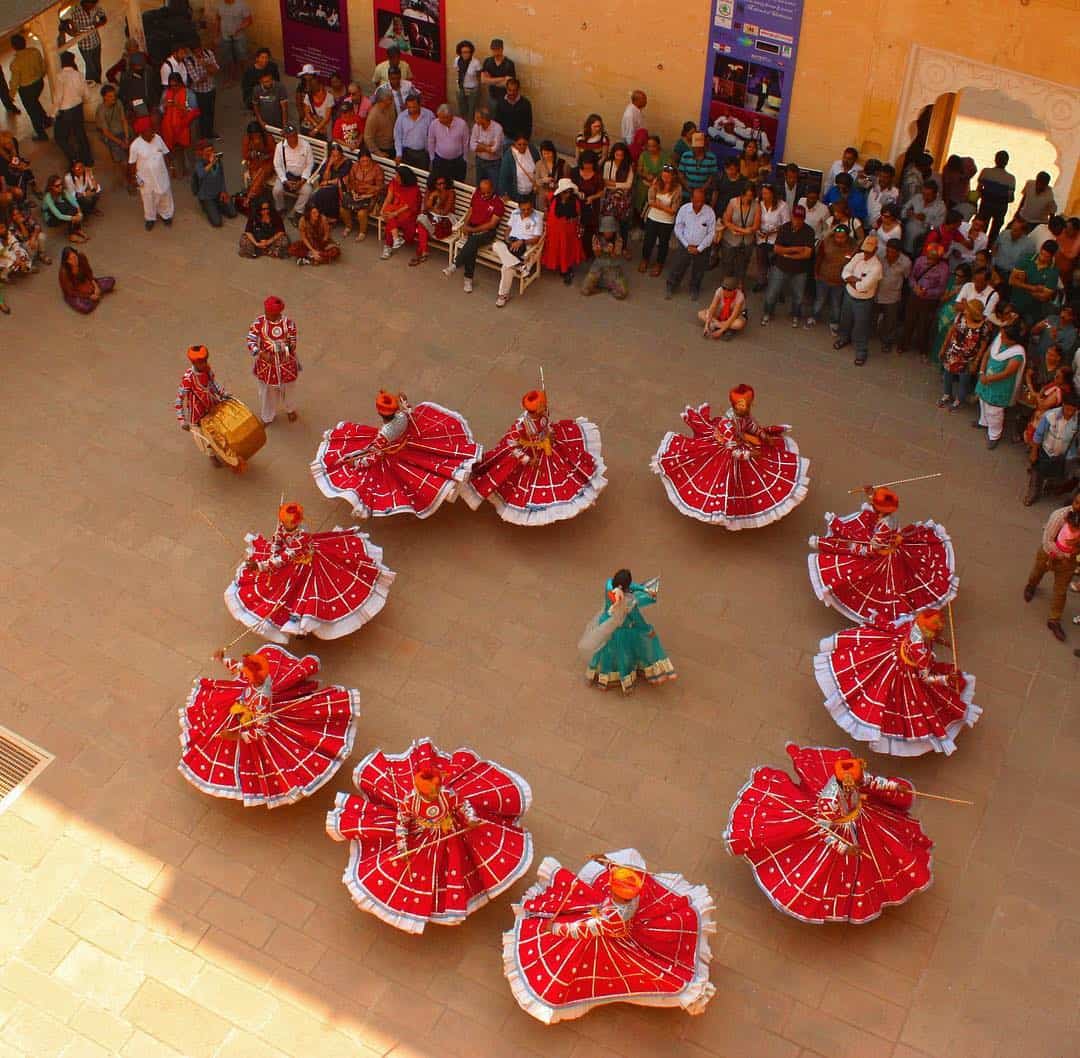 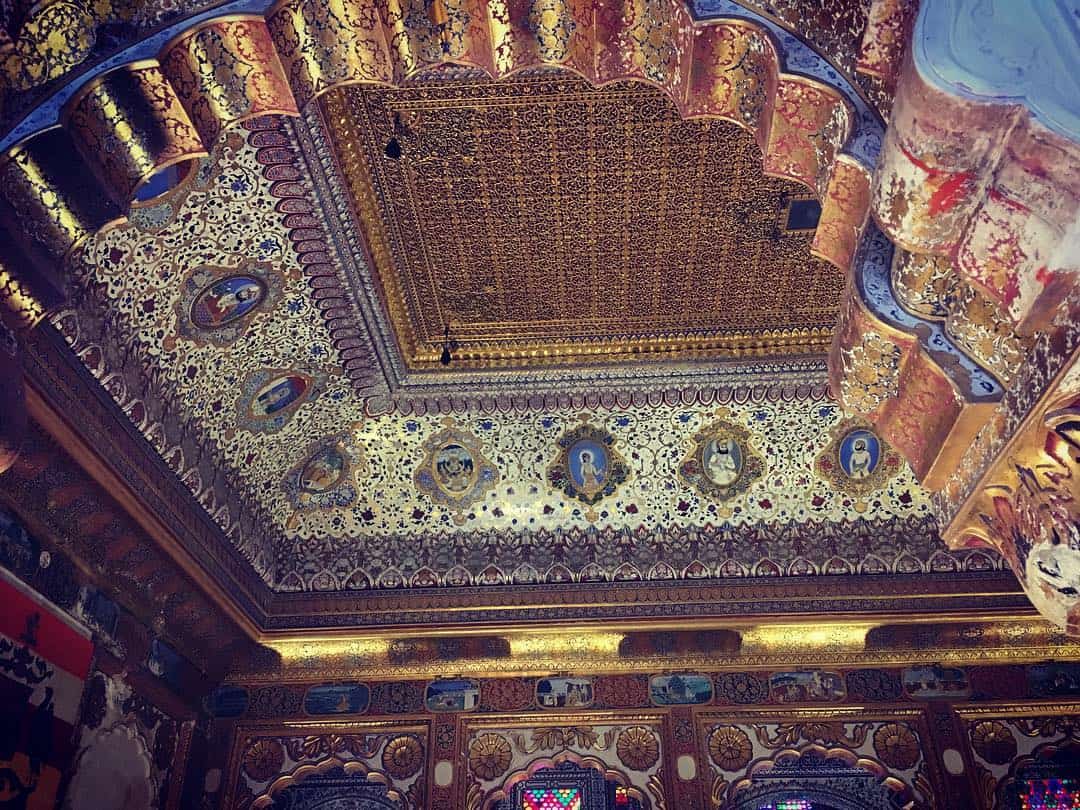 A crafted ceiling inside Mehrangarh Fort. Photography by Mayuri Athwale

Other Places You Wouldn’t Want to Miss

If you’re visiting Mehrangarh Fort, you can also visit the Nagnechi temple which was Rao Jodha’s favourite goddess and the Rao Jodha desert rock park, adjoining the fort, which is an ecologically restored desert and has arid land vegetation. Jaswant Thada was built by Maharaja Sardar Singh in the memory of his father, Maharaja Jaswant Singh cannot be missed. Ghanta Ghar commonly known as the Clock Tower of Rajasthan can also be visited while in the city. 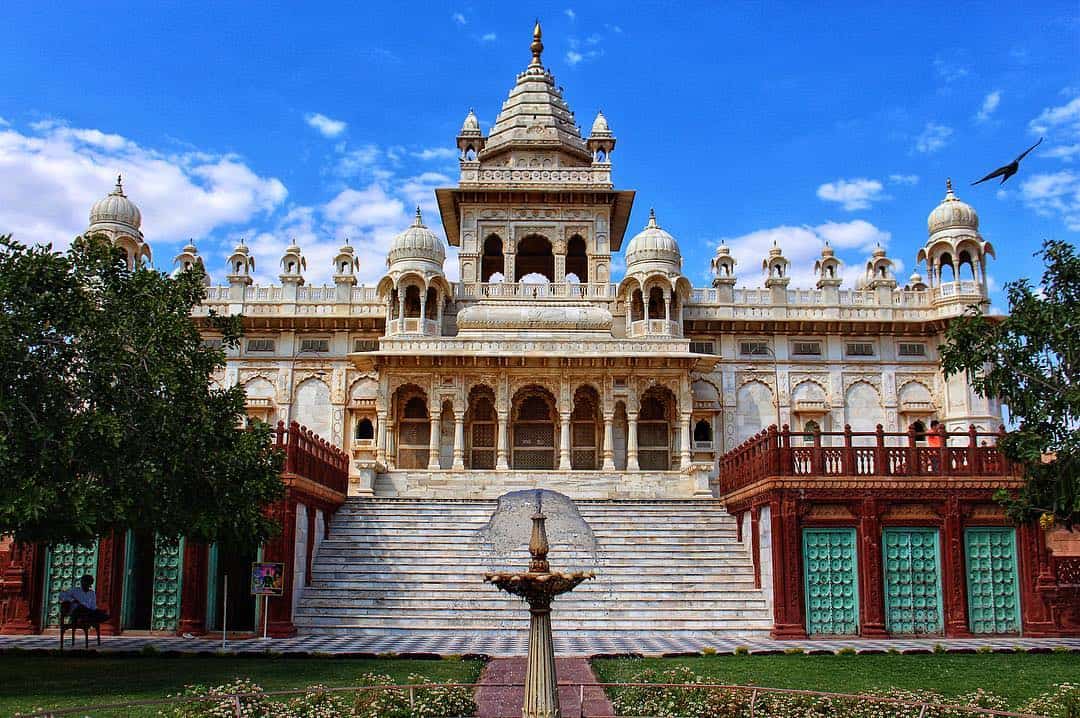 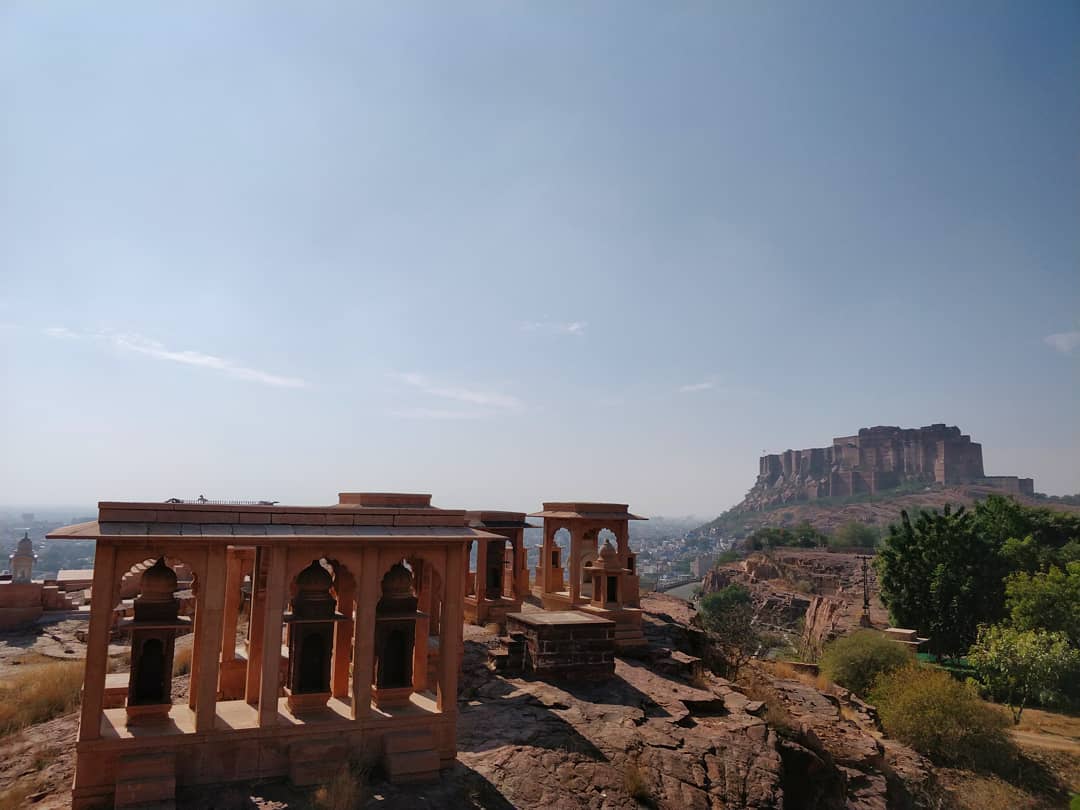 The giant Mehrangarh Fort from a distance. Photography by Prakhar Tripathi 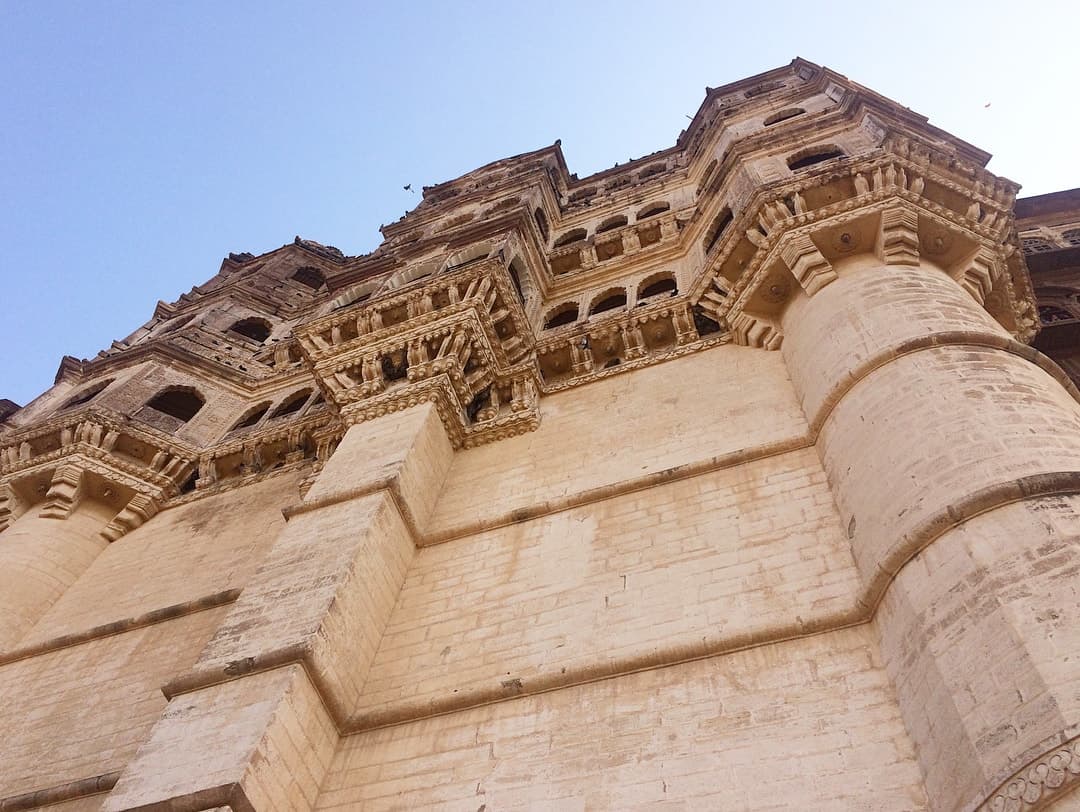 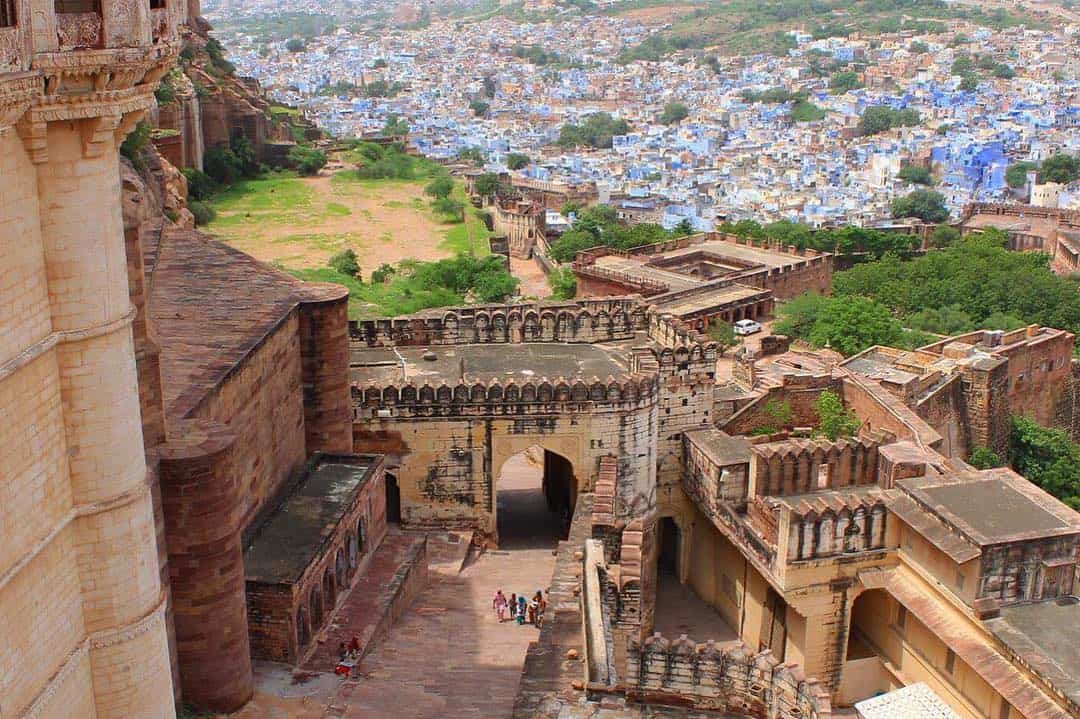 Mehrangarh Fort stands tall against the city of Jodhpur. Photography by Mattu Wu

Mehrangarh Fort in India’s Blue city is a must-visit city showcasing its varied and colourful traditions which also attract attention from across the globe. So make sure you plan a trip to the royal state and experience the culture everyone talks about. 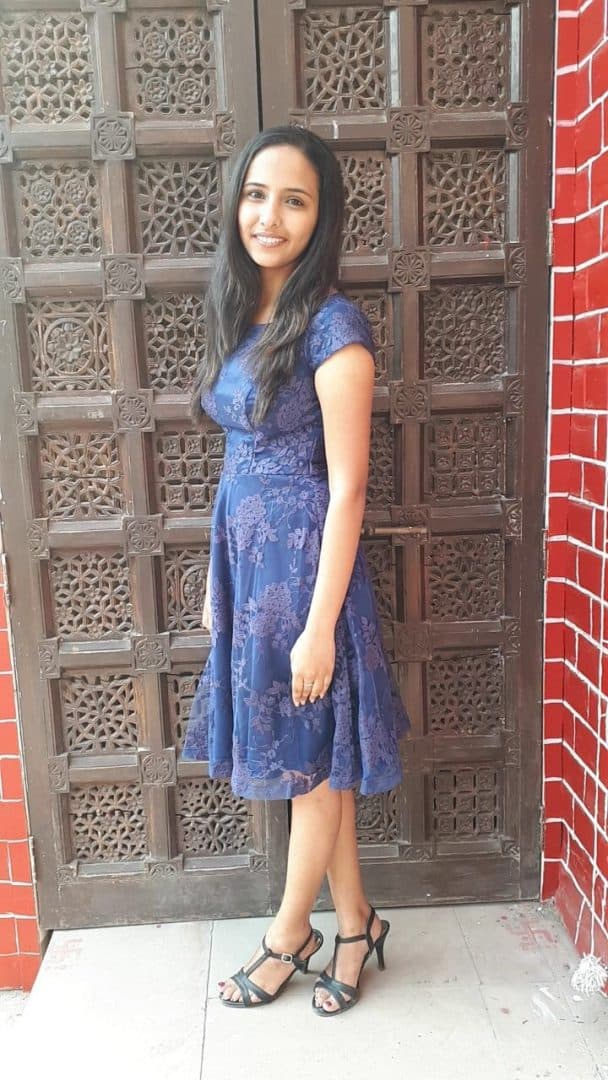 Shraddha Brahme hails from the Garden City of Bangalore in south India. She is currently pursuing a degree at the United World Institute of Design. Always interested in exploring different cultures is what has always kept her passion for travel alive. Talking to people and trying out the traditional food is also something she enjoys.

THIS POST ENTITLED, “MEHRANGARH FORT: JODHPUR’S SPLENDOUR STANDING TALL ON A CLIFF” IS AN EXCLUSIVE PROPERTY OF BUDGET WAYFARERS. ANY INDIVIDUAL OR ASSOCIATION INDULGING IN PLAGIARISM WILL BE DEALT WITH STRICTLY. IF YOU WANT TO USE INFORMATION FROM THE ARTICLE ABOVE, KINDLY QUOTE THE SOURCE.