Marine Drive, they say resembles a queen’s necklace at night. It sparkles, it glows and it brings about a heavenly feeling. Located in Southern Mumbai, it is a gorgeous boulevard that attracts thousands of Indian and international tourists each year.

Not many people are aware of the fact that Marine Drive is officially known as ‘Netaji Subhash Chandra Bose Road.’ It is one of the most beautiful sites for taking a stroll during the evenings. In the current article, I’ll be highlighting my experience that will help first-time visitors enjoy Marine drive to its fullest. Also, the transformation in me from a timid kid to a self-assured woman will be evident.

When my mum was 21, she and my dad visited Mumbai for the first time.  At Gateway of India, amidst the massive crowd that is a constant feature of the city, my mum got lost. In a time of no cell phones, or Google, that is a really, really stressful situation, especially for a woman who was five months pregnant. It took her hours to find my dad, by which time she developed a massive fear of Mumbai and so did he. And so, for 21 years, anytime I mentioned going there, whether it was for a trip with friends, a concert or even an interview, I got a resounding, solid no.

I think the annoying part about that was how every one of my friends who had ever been there described it as the most amazing city in the country. They spoke with dreamy gazes of Marine Drive, Band Stand, Juhu Beach. They told me about the amazing street food, the booming nightlife and the wonderful, kind people. Every time I told someone that I’d never visited Mumbai in my life, they’d look at me as though I’d grown a second head.

A view of the horizon from Band Stand. Photography by Devanshi Khanna 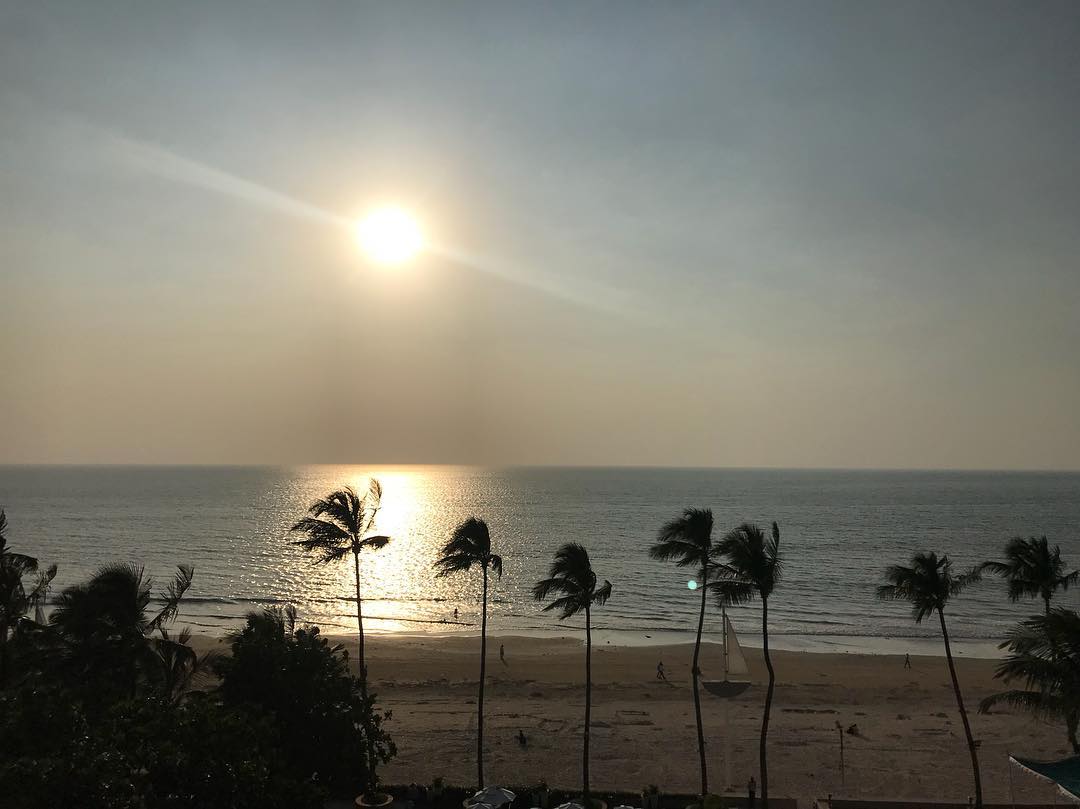 Recently I decided I had to see the wonders of the city of dreams myself. I packed my on the cheapest plane seat I could acquire. After a two hour delay and one hour flight time, I finally reached
Mumbai, excited to begin exploring as much as I could. I never imagined that spending some quality time at Marine Drive will leave me with an entirely new perception for life.

Pizza Date with the Arabian Sea

I had heard so much about Marine Drive by that point that I was prepared to be a bit disappointed on account of my giant expectations. We began the afternoon by hogging enormous amounts of food at ‘Pizza by the Bay It took us a while to get a table, about 20-30 minutes, but in that time we indulged in some of the most delectable Ice-cream sandwiches I’ve ever had from K Rustom’s.

It’s a small establishment by the Churchgate station with people surrounding at mostly all times of the day. I chose to try the Rum and Raisin Ice-cream Sandwich which was creamy and flavourful. I even took bites of the Sitaphal, Roasted Almond and Coffee Crunch – each one of them was awesome. This place is a definite must-try in Mumbai. Pizza by the Bay was a delight in terms of ambience. It was windy and cool, with a fantastic view of the Arabian Sea. I’m a sucker for some good garlic bread, and Pizza by the Bay won me over with theirs. They served a whole loaf of garlic bread which they sliced into four pieces. The bread was soft, with buttery garlic shavings in the centre and a crispy red crust on the outside.

The Paneer Piccante 9 Grain Pizza blew me away and I’m generally not a fan of vegetarian pizzas. The crust was amazing – light, crispy and delicious. My friends, however, maintained that the crust has gone downhill over the years and that it had been much better before. The barbeque chicken pizza, smoked chicken pizza and the classic Margherita were among the others we tried and every single one of them was a delight, especially the classic Margherita. Pizza by the Bay is often called one of the best pizza joints in the city and I could see why. Their renowned thin-crust pizza and a gorgeous view of the ocean is a combination that’s hard to beat. 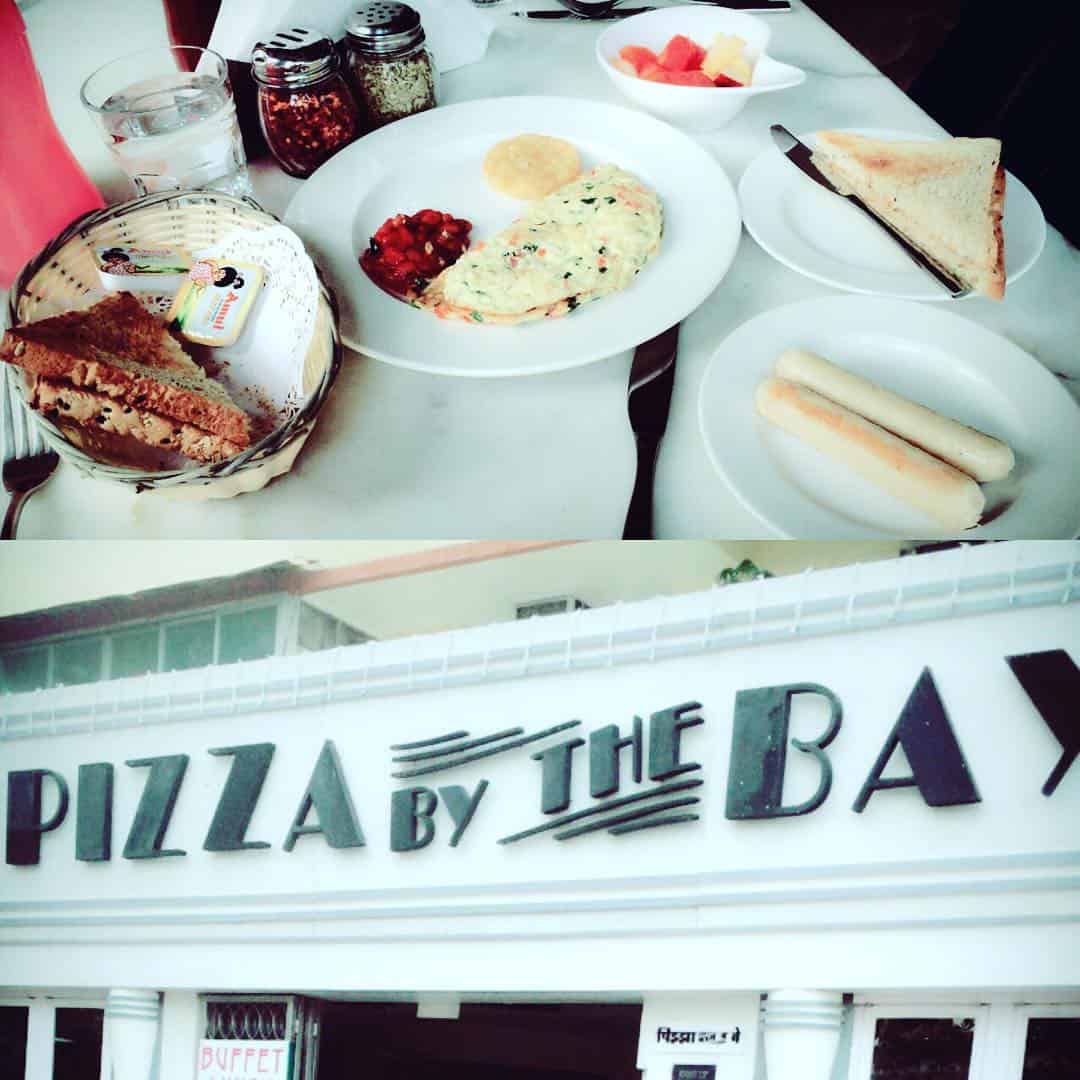 Music, Chocolate and Beer with Strangers

As we walked along the path, we ran into some really friendly Mumbaikars who offered us cigarettes, tea, and some great company. One of them had a guitar and we got lost in playing tunes and singing old songs that I thought I’d forgotten. Perhaps it was the people with me, the coastal wind, or my belly full of pizza but it was wonderfully freeing to be there and I knew why everyone who came here simply raved about it. We headed to Bachelor’s, a small street joint just off the Drive, for a quick bite of an aloo masala cheese grill sandwich and a glass of their thick, chunky, Bachelorr’s Chic-Choc shake.

The sandwich was delicious and the shake was so viscous that three people together were unable to finish it. Every chocolate fanatic must try this shake at least once. It started to rain then and we hopped into Geoffrey’s for a drink. The ambience of the joint was of a classic, 90s British watering hole. With groovy retro tracks and whiskeys nursing between our palms, we munched endlessly on masala fries and Cajun Prawn Spring Rolls. We also played several rounds of Jenga – the tower collapsed sooner and sooner as we downed drinks. Several beers and laughs later, we headed back to the bewitching boulevard to spend the night in the windy embrace of the coast. 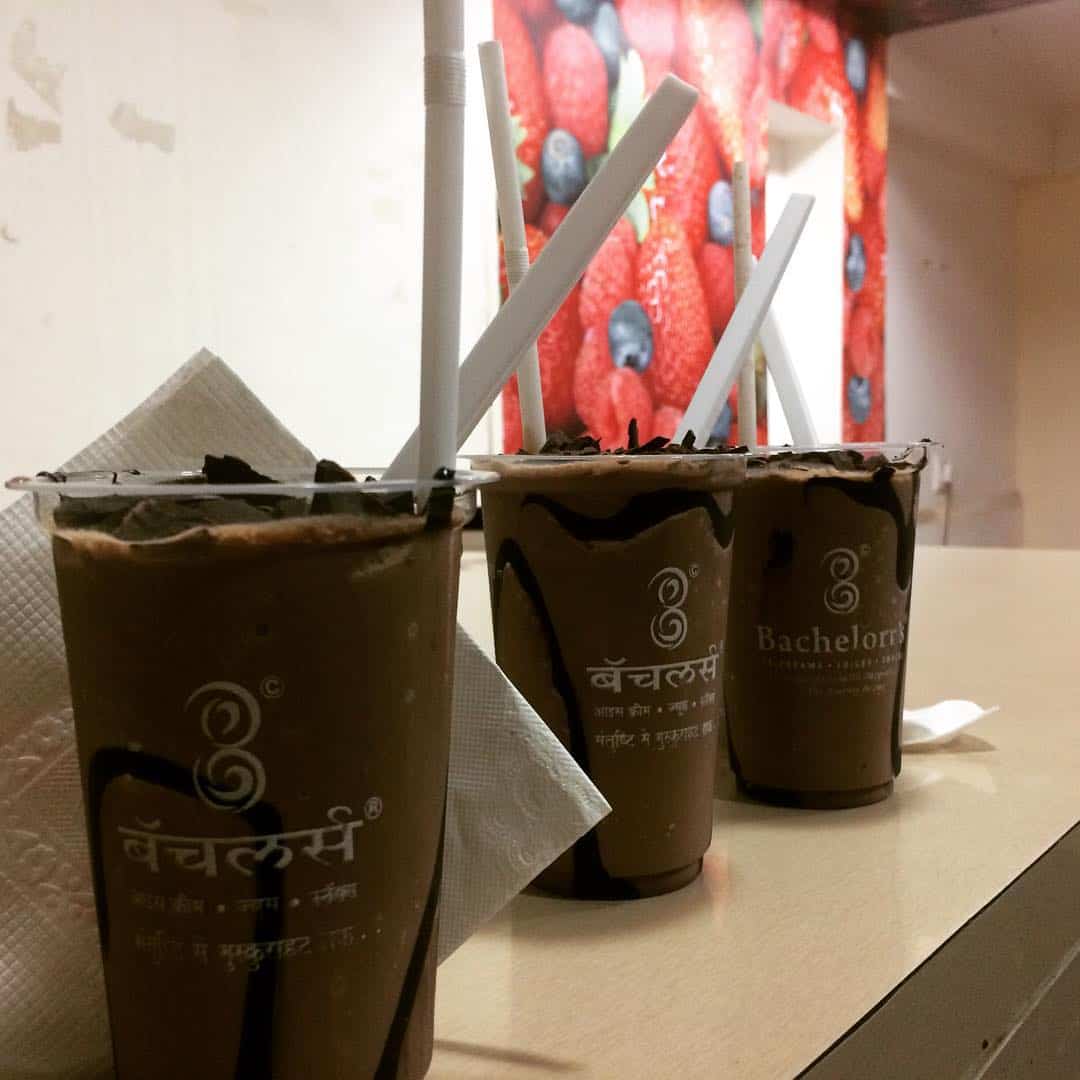 It took me longer than normal to finally make it to Marine Drive but it was so worth the wait. The experience was every bit as awesome as everyone told me – one of the rare times my expectations from a very popular place were fully met! If you haven’t been there yet, I’d highly recommend that you do. And here’s a pro tip: take your best friends. It makes the experience all the better for it.

Hemanshi is a writer, editor and content strategist who is obsessed with mangoes and John Oliver. The latter being more important than the former. Alumni of India’s top college for commerce – SRCC, New Delhi, Hemanshi is a hard-working and confident individual who doesn’t mind pushing her boundaries every single day.

THIS POST ENTITLED ‘MUMBAI’S BEWITCHING BOULEVARD – MARINE DRIVE’ IS AN EXCLUSIVE PROPERTY OF BUDGET WAYFARERS. ANY INDIVIDUAL OR ASSOCIATION INDULGING IN PLAGIARISM WILL BE DEALT WITH STRICTLY. IF YOU WANT TO USE INFORMATION FROM THE ARTICLE ABOVE, KINDLY QUOTE THE SOURCE.