Majuli is one of the largest river islands in the world and is home to thousands of travellers each year. The Island is home to tribal communities including the Musings, the Deoris and the Sonowal Kacharis. It has also been called ‘the cultural capital and the cradle of Assamese civilization’ for the past 500 years.

Majuli island is the perfect spot to witness culture and diversity. Far from the madding crowds of city life, it rejuvenated me with its quiet, rustic living, its countryside charm and warm hospitality. For those who know about Majuli, comprehend it as one of the world’s largest river islands.

When we travel, there are places that stay with us for months, sometimes years after we’ve visited them. Majuli has always been that place for me. To me, Majuli is an embodiment of solitude and peace.

Majuli is also an art and cultural hotspot of Assamese Vaishnavite culture –  one of the major traditions of Hinduism. But there’s a flipside. Majuli is fast disappearing because of heavy floods and soil erosion which has reduced the island to one third of its original size. So if you are planning a trip to the island, make sure it’s soon.

This Majuli travel blog will help you plan and make the most of your visit to the island.

Majuli is famous for being the biggest River Island in the world and being the centre of Vaishnavite Hinduism. Here are a few things you need to know before planning a visit to the island.

It is believed that the island was originally one narrow piece of land between the Brahmaputra and Burhidihing rivers. It was also the capital of the Kingdom Chutia. Frequent earthquakes in the 17th century and floods in the 18th century modelled the island into its present form.

Majuli is said to be a leading centre of Vaishnavism since ages. Written records reveal that 16th-century reformer Sankaradev visited Majuli and laid down the building blocks of the medieval-age neo-Vaishnavite movement. He established monasteries and satra on the island, which attract many devotees to the island every year.

How to Reach Majuli Island?

Jorhat is the closest town to Majuli Island in Assam. However, if you travelling to Majuli from the capital Guwahati, you have to first reach Jorhat. There is no direct route from Guwahati to Majuli by ship. You can get shared cabs, trains and flights between Guwahati and Jorhat.

The nearest airport to Majuli is at Jorhat and most major cities in India have connecting flights to Jorhat. If you want to save on airfare, an alternative travelling option would be to take a flight to Guwahati, the capital of Assam, and then travel by train or shared cabs from Guwahati to Jorhat.

Jorhat is about 14 kilometres from Nimati Ghat, the ferry point from where you can travel by boat to the Majuli island. A ferry ride from Nimati Ghat is approximately an hour long and most early morning rides tend to be crowded. However, the picturesque sights around you of the mighty Brahmaputra and faint lines of white sandy beaches blur out the noise and chaos during the ferry ride. 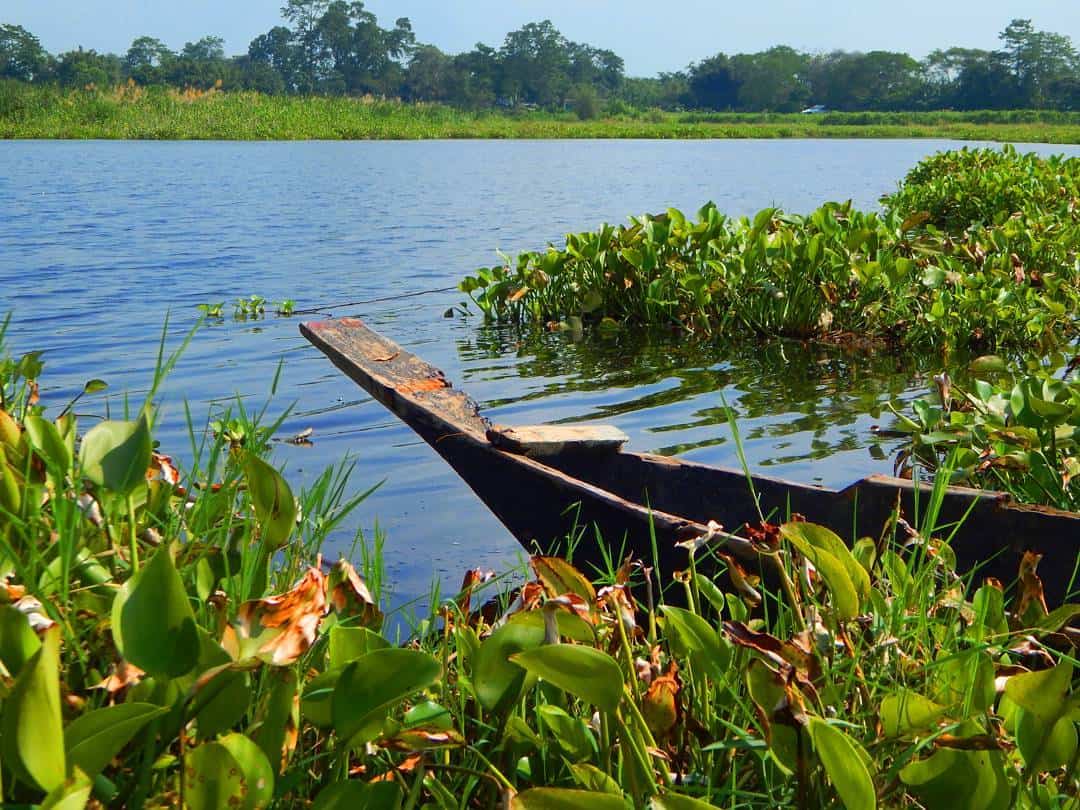 Jorhat is the town with the nearest airport to Majuli. Photography by Ishan Kashyap

Where to Stay in Majuli Island?

There are several options for accommodation in Majuli. If you’d like to know more about the culture of the place, stay in one of the ‘Satras’ or monasteries on the island. Other than that there are many guest houses and bamboo cottages in Majuli, where you could visit. 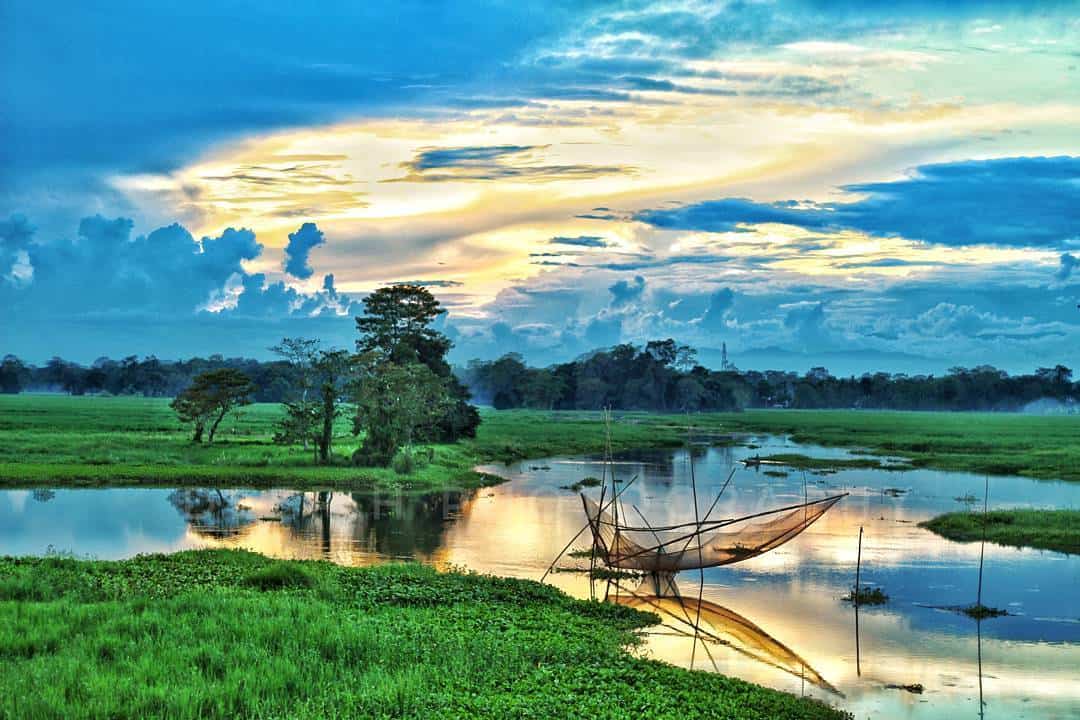 Plan a trip to Majuli before this beautiful island disappears because of global warming. Photography by Deepom Hazarika

Things to do in Majuli Island

Majuli Island is known for its natural beauty, arts and culture. Here is a list of must-do things to do in Majuli Island.

A Day in the Monasteries or Satras

You will need at least a day or more to visit the beautiful Satras on the island. Over twenty Vaishnava Satras or monasteries are spread across the Majuli island. Some of the Satras date back to the 15th century and house hundreds of monks. The Satras use ancient customs of mask-making, theatre, music and dance and are home to numerous cultural artefacts and relics such as ancient weapons, jewellery and literary manuscripts. What’s interesting to note is that each Satra has its distinctive attributes. When you are on the island, make sure to visit the Kamalabari Satra, Dakhinpat Satra, Garamur Satra and Auniati Satra, some of the most famous Satras on the island. 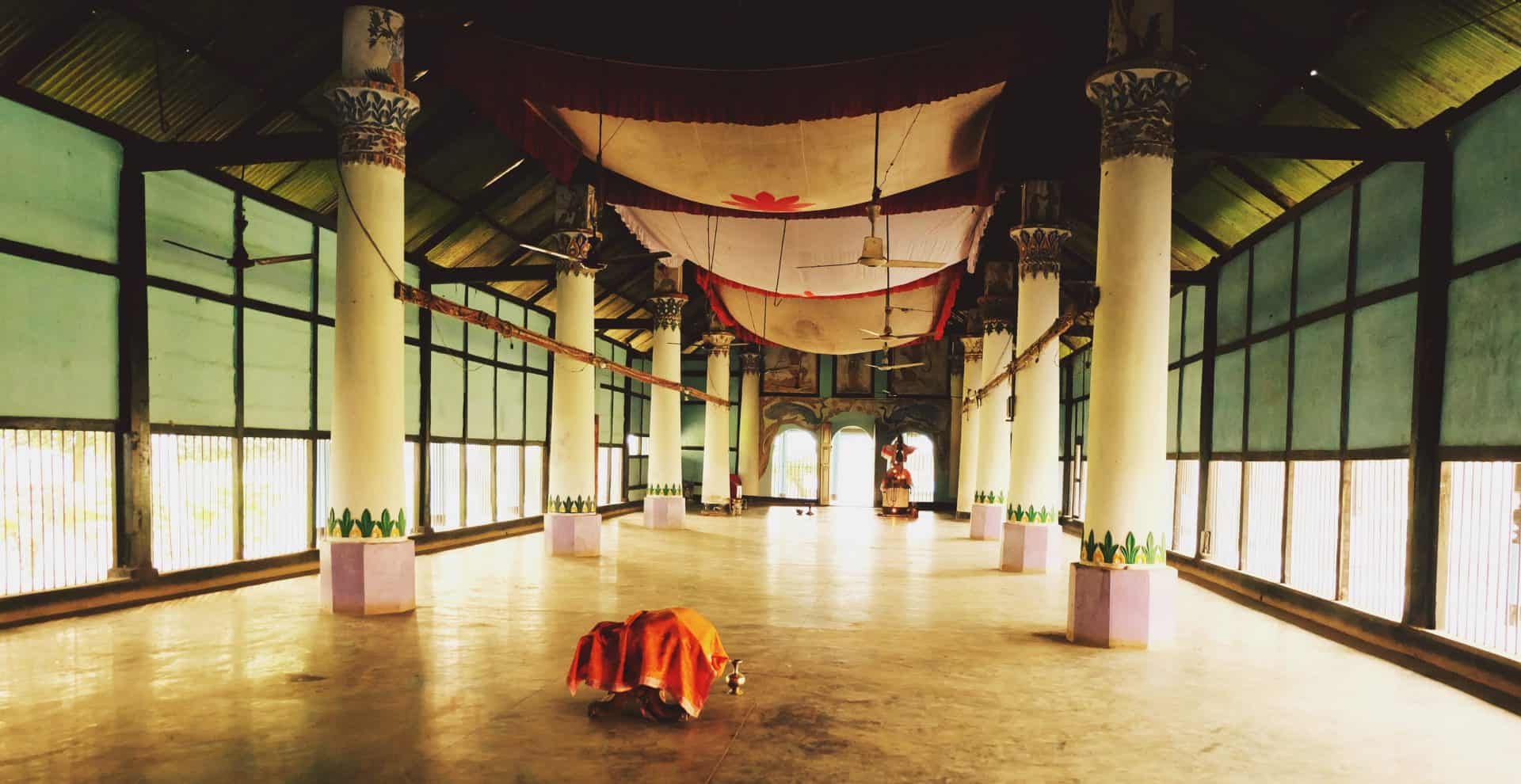 One of the most prominent Satras of Majuli, the Garamur Satra. Photography by Prarthana Banikya

Visit the Samaguri Satra where renowned craftsman Hem Chandra Goswami shares insight and practical knowledge on mask making. The Satra has been employing traditions of mask-making from the mid-17th century. The mask-making workshop has vibrant masks of animals and humans dotting the walls of the room.

Travel Tip: Satra is pronounced such that ‘S’ is silent. 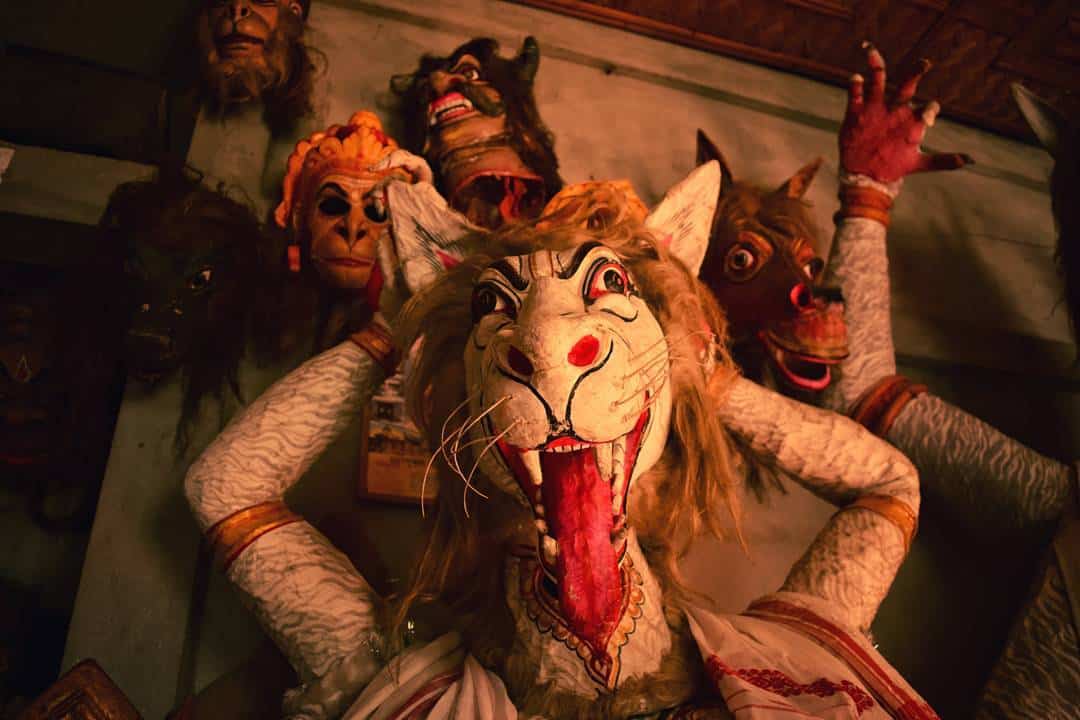 Spend a Day Getting to Know the Local Culture and Lifestyle

The locals in Majuli have a rich and vibrant lifestyle. Spend a day at one of the Missing villages or visit an agricultural farm. If you are inclined towards arts, head to the Salmora village and learn about local pottery practices. The locals in Majuli are warm and friendly and a day spent among them will give you a glimpse of their unique lifestyle. 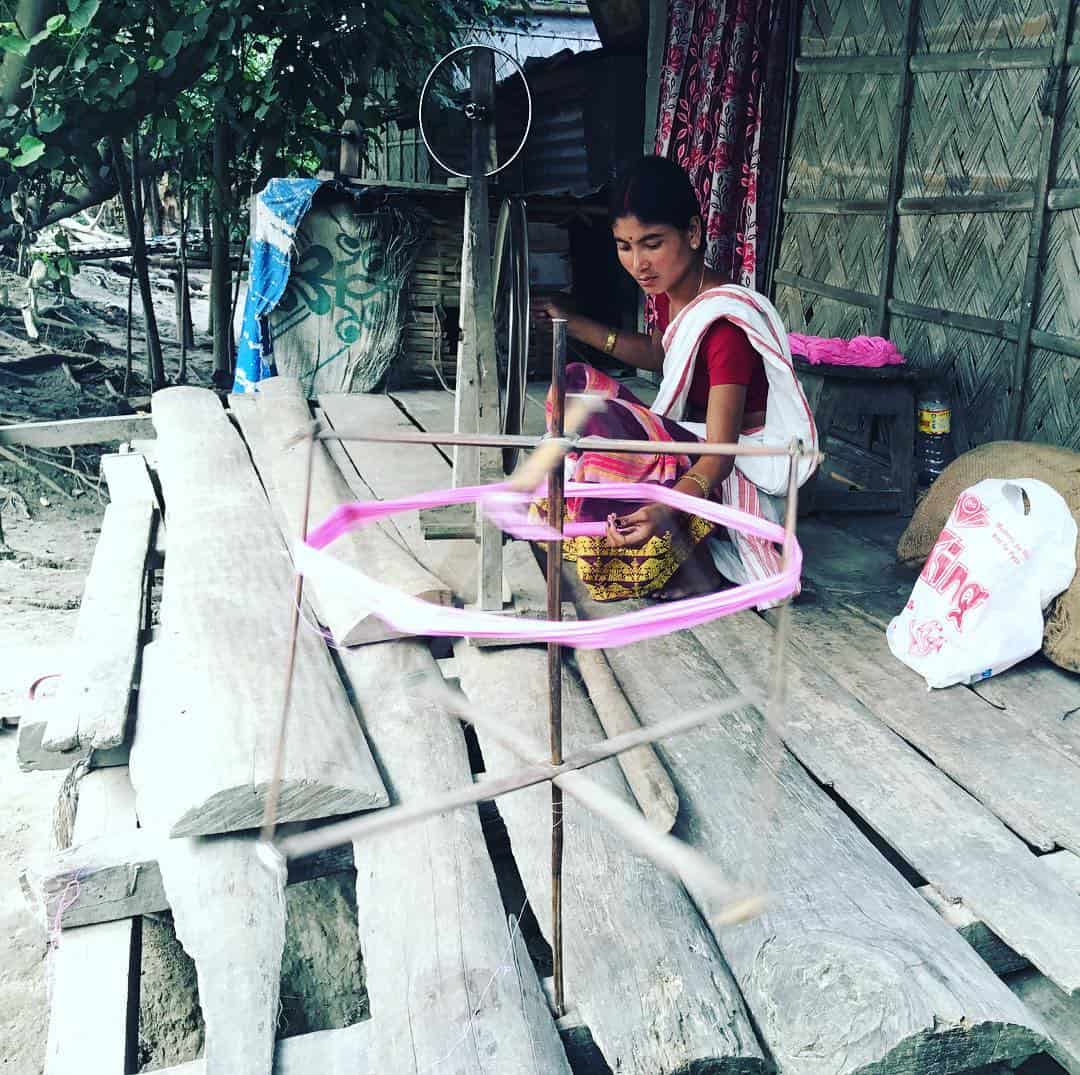 A Deori woman weaving handloom in one of the Mising villages. Photography by Pallavi Agarwal

A Stroll by the Brahmaputra River

This will be one of the most tranquil walks you’ve taken in a while. A personal favourite walking route of mine is the stretch alongside the Brahmaputra outside Dekasang resort. On the river, you’ll sometimes find a fisherman rowing a boat or fishing nets by the riverside set up by the locals. Morning or evening walks by the river are especially recommended. The skies often blend into a riot of colours during evenings and the sunsets on the island are spectacular. 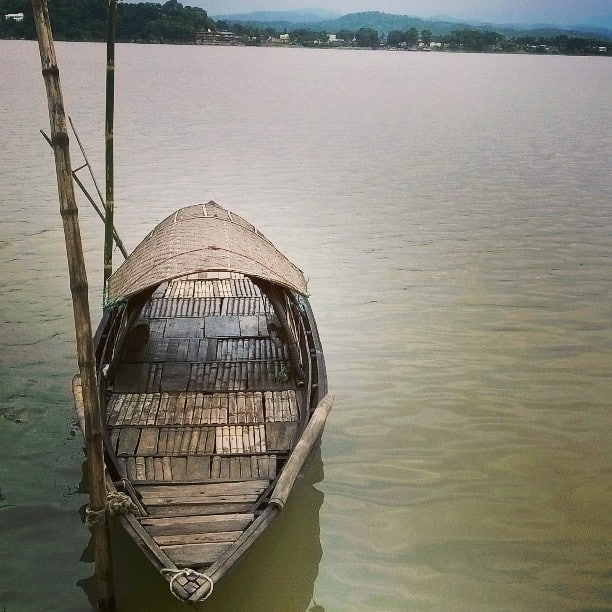 Witness the Festivals in Majuli

When planning your trip to Majuli, try to coincide your travel dates with the famous Raas Leela festival that takes place in the third week of November. The much-awaited festival of the island is a celebration of music, theatre and dance. For this festival, thousands of devotees visit the Satra.

Another popular festival is Ali aye ligang. It is celebrated during mid-February for 5  days. During the festival, local food and beveraes ar prepared and served. 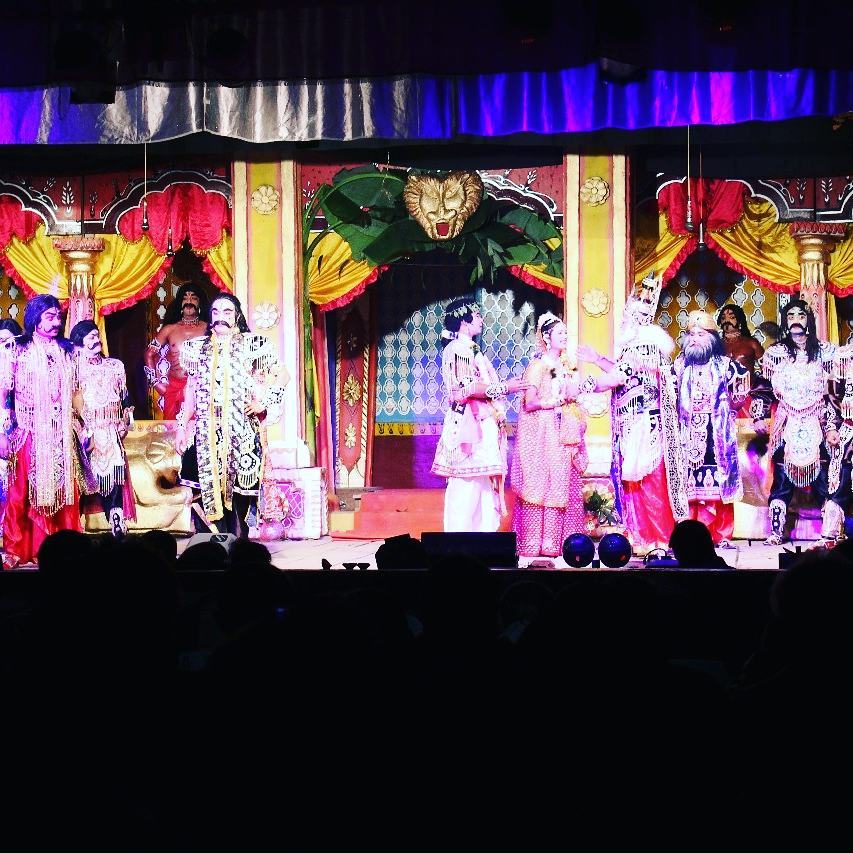 Enjoy a Local Meal at Majuli

The Dekasang Resort and Hotel La Maison de Ananda in Majuli is known for the sumptuous food that they prepare. What is particularly special about the food here is that fresh local delicacies are prepared that give you a peek into the culture of the region. A traditional meal includes rice, vegetables, meat and fish along with Apong, the Mising rice beer. Although there aren’t a lot of restaurants or varieties of cuisine in Majuli, most places that provide accommodation serve traditional Assamese cuisine. 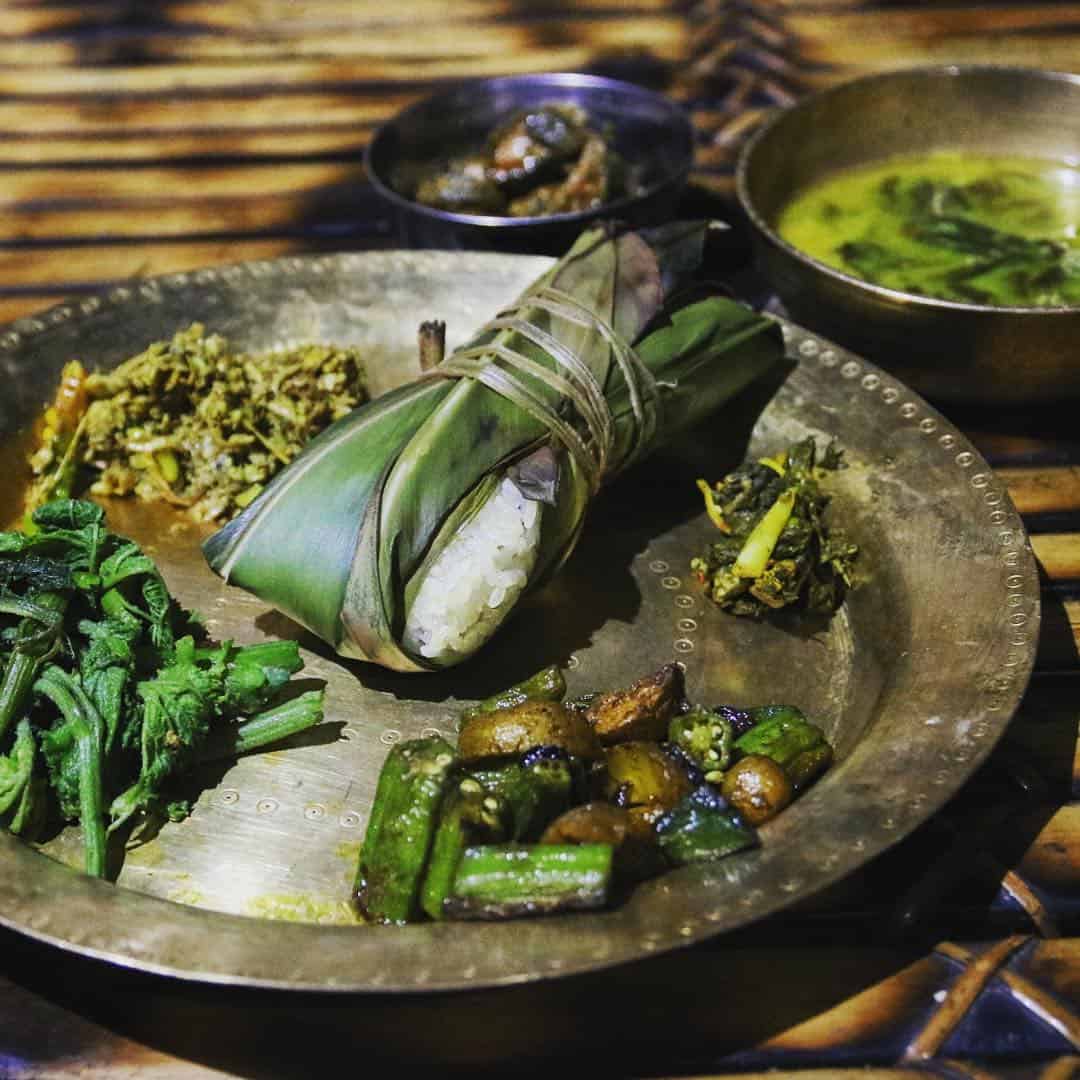 Majuli is one of the safest places I’ve ever visited. However, it is important to note that after dark, there is very little activity in the island and the best way you can spend your evening is by relaxing in the comfort of one of those beautiful, rustic cottages. 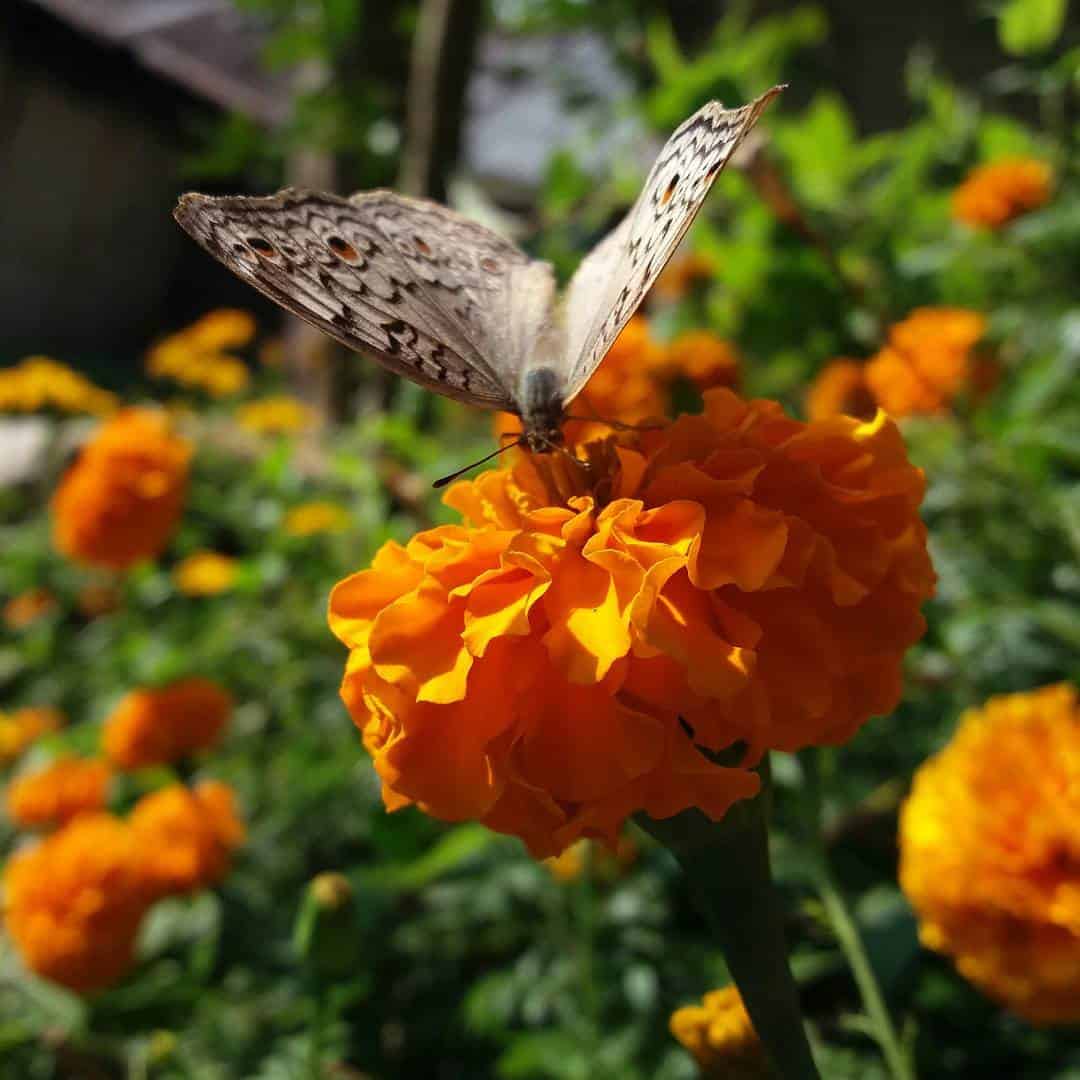 Majuli is unique in ways more than one. So when I got home from my trip to the island, there wasn’t just one memory that lingered in my mind. The majestic Brahmaputra that encapsulates the island, the island’s sandy white beaches, bright blue skies and beaming faces of the children from the island. Even years later, a piece of Majuli still remains with me.

Prarthana Banikya is a poet and writer based in Bangalore. A graduate in Sociology from Miranda House, Prarthana is currently studying poetry writing from the London School of Journalism. In 2016, Prarthana was nominated for the Pushcart Prize for poetry and subsequently won the second prize at the Orange Flower Awards. Her work has been published in several anthologies and journals including Aaduna, Asia Writes, Danse Macabre and Pratilipi among others. She loves to write and runs a blog.

THIS POST ENTITLED, “Rambling through Majuli – The World’s Largest River Island” IS AN EXCLUSIVE PROPERTY OF BUDGET WAYFARERS. ANY INDIVIDUAL OR ASSOCIATION INDULGING IN PLAGIARISM WILL BE DEALT WITH STRICTLY. IF YOU WANT TO USE INFORMATION FROM THE ARTICLE ABOVE, KINDLY QUOTE THE SOURCE.