Castles in Edinburgh are reminiscent of all the Enid Blyton and Grimm Brothers’ tales you must have read as a child. When traveling to the Scottish capital of Edinburgh, visiting castles around the country is obligatory.

Castles, like the traditional Scottish home, have been handed down through generations. They hold the secrets to some of the great names throughout Scottish and English history. To name but a few, Sir Walter Scott, Edward I of England and Mary Queen of Scots.

If you are looking to visit some castles in Edinburgh and the surrounding area, you don’t have to travel far to feel like you are right at the centre of a medieval fairy tale. You’ll find yourself surrounded by them. In fact,  if you are looking for an enchanting wedding location, a number of castles in Edinburgh could be host to your special day.

Scotland’s castles date back to the Middle Age as a symbol of protection of the people and later, an establishment of the middle class. The capital Edinburgh is home to some of the most beautiful castles in Edinburgh.

In this blog, I will take you through some of the best castles of Edinburgh: 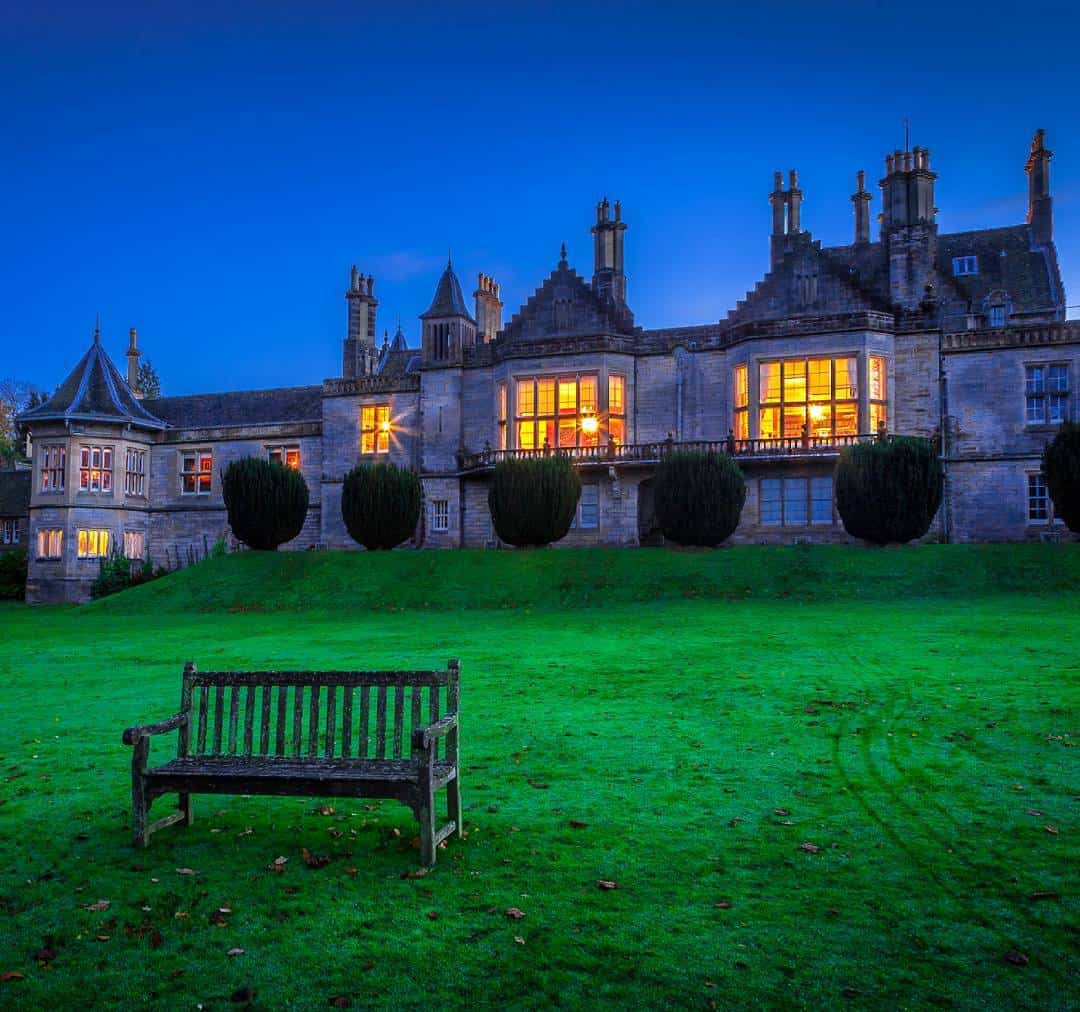 Scotland’s castles date back to the Middle Age as symbol of protection of the people. Photography by Stephen Bridger

While visiting the Castles in Edinburgh, it is also essential to understand Edinburgh as a travel destination. This is even more important if you are a first time visitor.

Edinburgh as a Travel Destination: An Overview 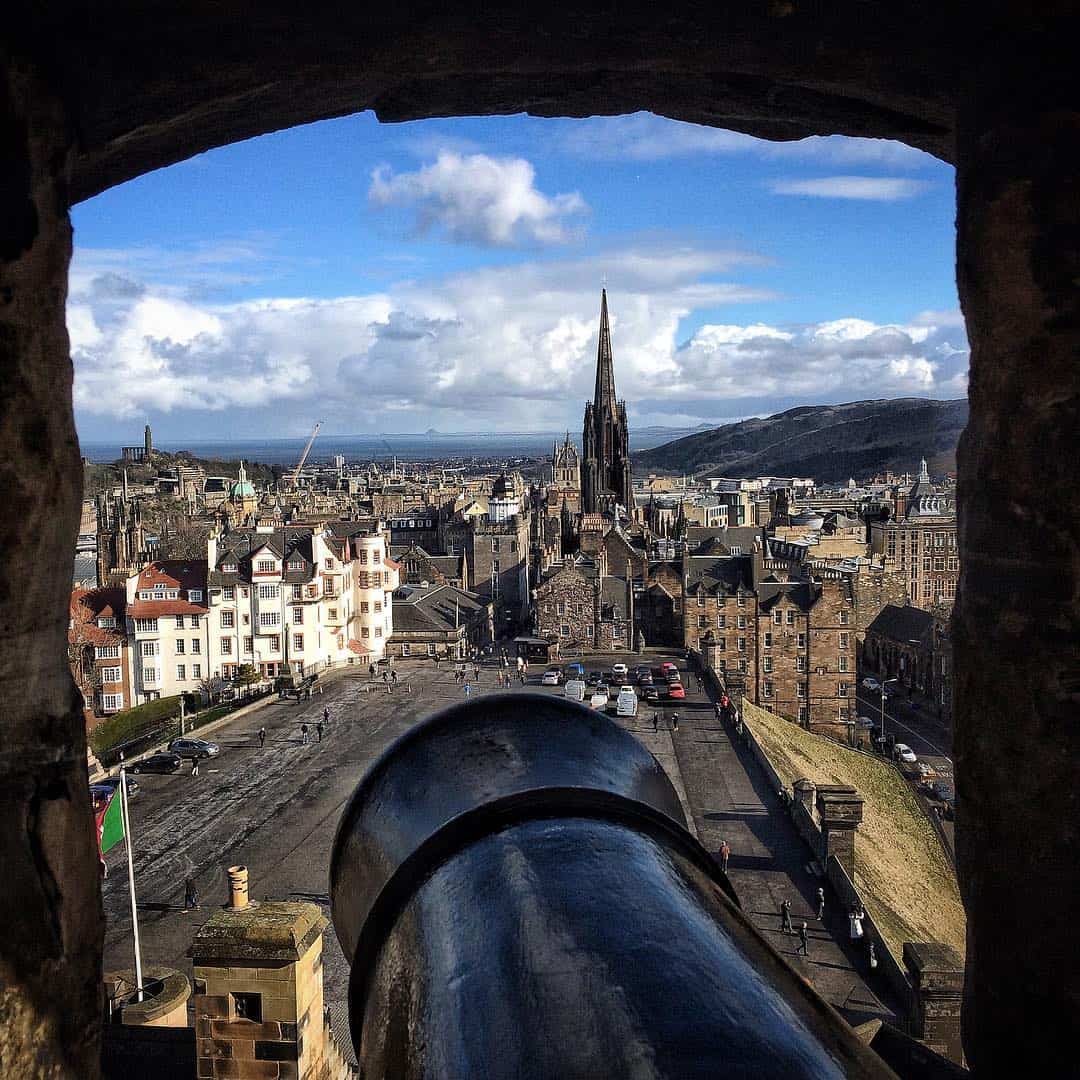 Edinburgh is a lovely travel destination when it comes to visiting castles. Photography by Valentina Scutra

If you’re heading to witness the beautiful castles in Edinburgh, you should be sure to make flight reservations and accommodation bookings in advance. The earlier you book, the cheaper the tour to Castles in Edinburgh.

Here are some suggested budget options –

Visiting the Best Castles in Edinburgh 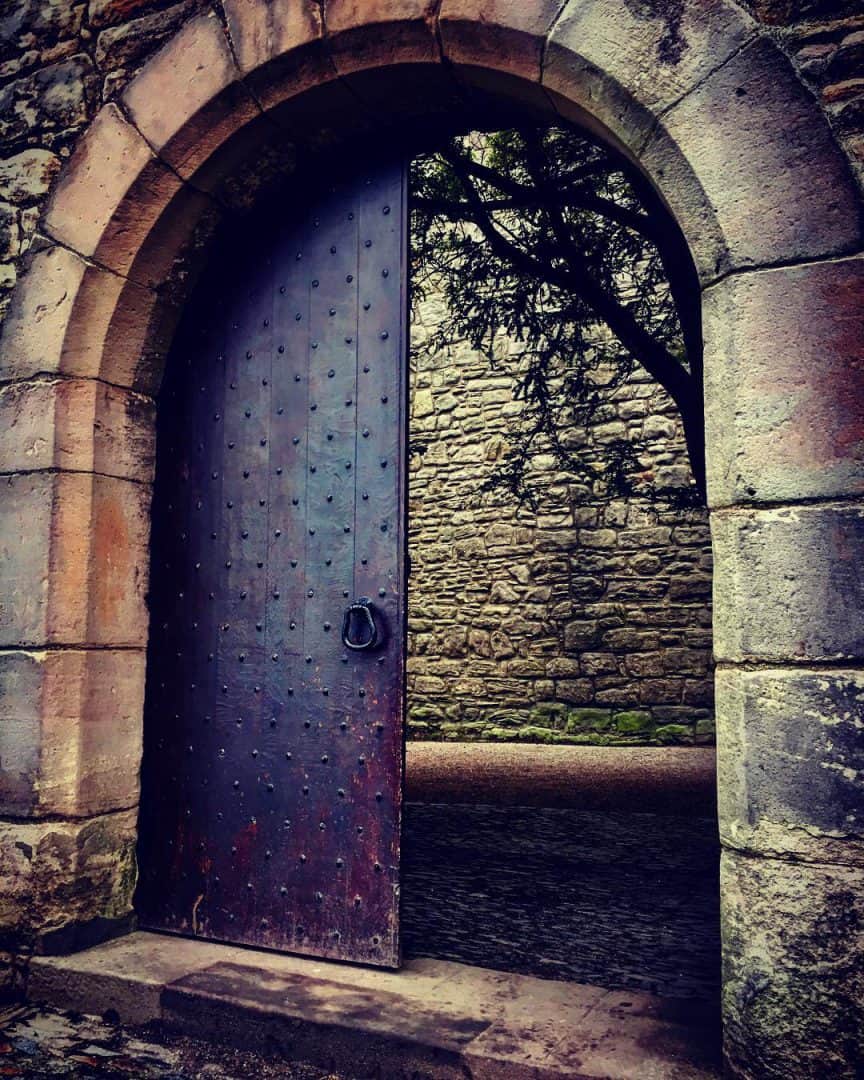 Originally built in the late 14th century, Craigmillar castle was one of the first castles in Edinburgh to have a tower house of it’s kind. It’s high battlement walls and many rooms are features that are prominent throughout the castle.

One of the castles most notable features is its mid-15th-century inner courtyard wall. This serves as extra protection for the castle. Should intruders get past the outer wall, they’ll struggle with this. It’s impenetrable at 1.8 metres thick with small keyhole-shaped slits to fire through.

Inside these walls are the castle gardens with a central feature of a pond shaped like a P. This was designed with the first owners in mind, the wealthy Preston family. It is also said that a sycamore tree planted by Mary Queen of Scots herself can still be found.

Craigmillar Castle is particularly famous for its royal associations. When the plague swept over Edinburgh, it is said that a young King James V stayed in the castle to escape the disease. Furthermore, the brother of King James III, accused of witchery, was held prisoner and later died here.

During the 16th century, Mary Queen of Scots visited on several occasions. The last being the beginnings of talks to kill her husband, Lord Darnley, of which she was unaware.

Continuing to the 17th century, the castle was sold to The Gilmour family. They made further renovations to the endless rooms the castle has, such as a church to be used by a nearby village, before leaving the house in the late 18th century.

After this time, the castle became the tourist attraction it is today.

How to Reach Craigmillar Castle? 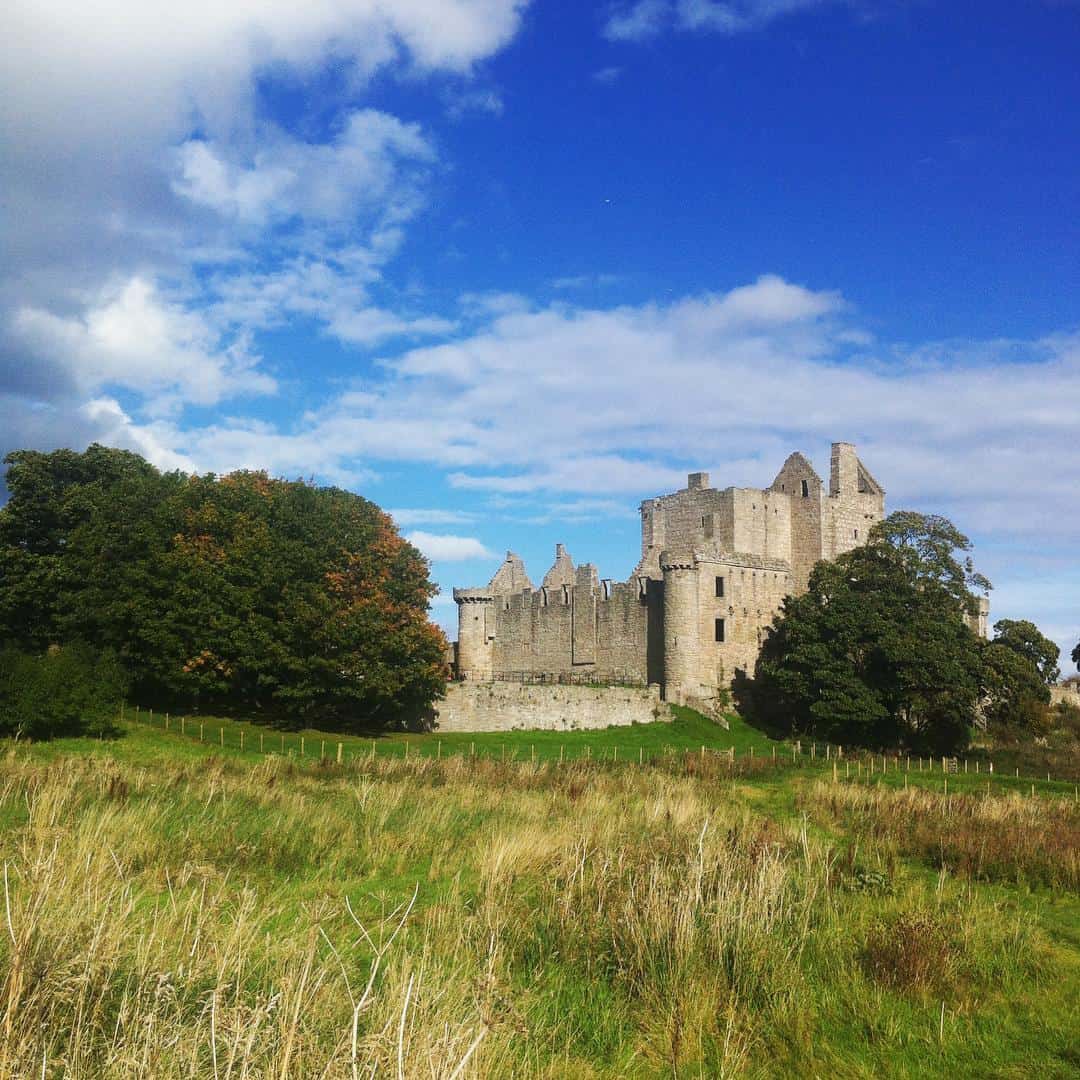 Marking the very centre of the city, Edinburgh Castle is iconic in Scotland, and undoubtedly one of the most famous castles in Edinburgh.

Over 1000 years old, the castle was once home to Scottish royalty, and a fortress throughout the centuries; making it the foundation of Scottish history, with references to Robert the Bruce and Mary Queen of Scots.

Although much of the castle was destroyed over time, the grounds are still home to what is expected to be the oldest building in Edinburgh; St. Margaret’s Chapel, which dates back to the 12th century.

Today the castle is owned by the Scottish Government and the army. It acts as a hub for activity in the city throughout the year. A tourist attraction, a venue during the International festival; host to the military tattoo and New Years Eve celebrations, and sometimes, a wedding venue.

The castle is fairly unmissable. It is located at the top of the Royal Mile (High Street). It can be seen from every angle of the centre of the city.

If you intend to visit Edinburgh during the peak months of August or December, it’s highly recommended you book your tickets before visiting to avoid disappointment.

If it’s your first time visiting Scotland, an audio tour is recommended (available in many different languages) for an additional £3.50.

A worthy investment for extravagant and complex history.

How to Reach Edinburgh Castle? 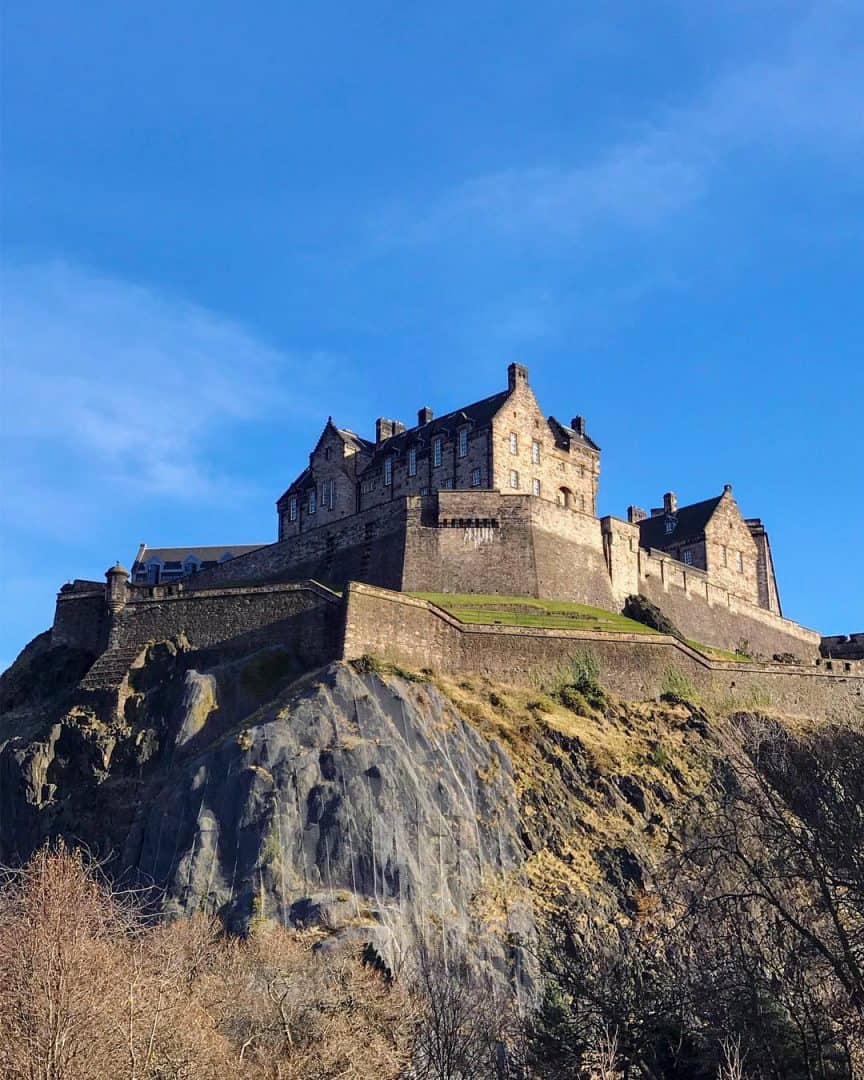 Marking the very centre of the city, Edinburgh castle is iconic of Scotland. Photography by Fionna Reid

The building we see today was once the site of a medieval castle, however, due to Scotland’s turbulent past. Like many buildings, it was destroyed when Edinburgh was raided in the 16th century.

Lauriston castle was owned by many of Edinburgh’s elite middle class. The last were avid collectors of furniture, artwork and ceramics, much of which can still be seen in the castle today.

The castle is now one of the few castles in Edinburgh to be considered a museum, with gardens that are free to enter and perfect for a family day out.

In the Summer, there are also creative workshops in the gardens.

How to Reach Lauriston Castle? 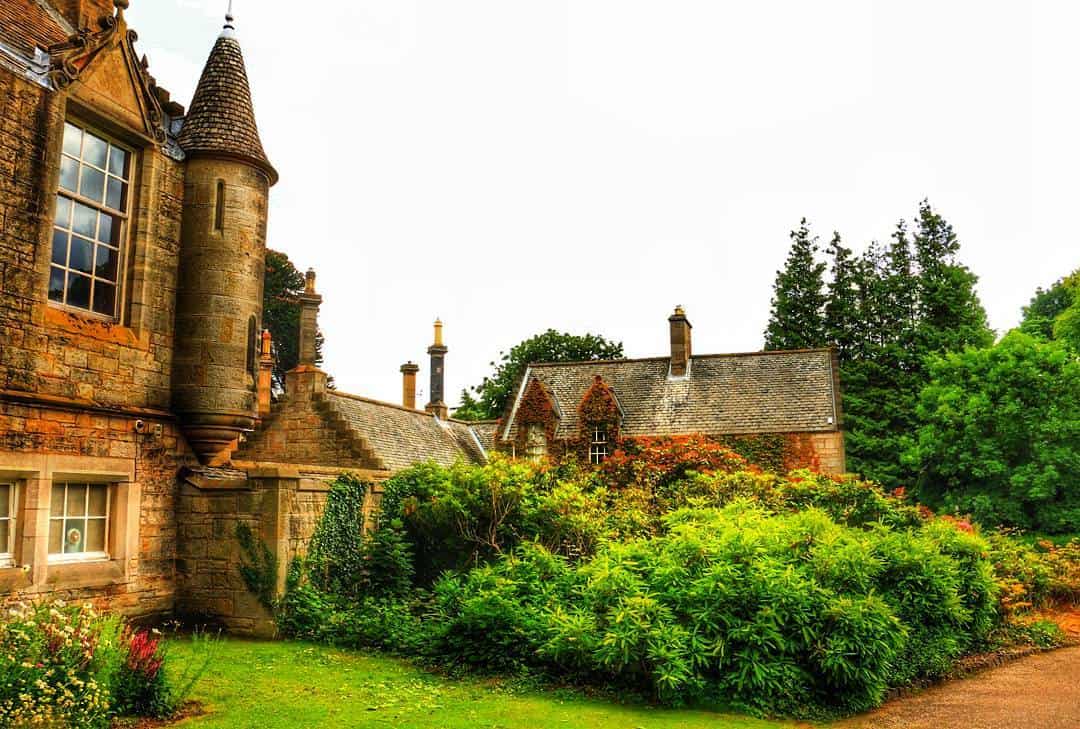 Lauriston Castle is now one of the few castles in Edinburgh to be a museum now. Photography by Baris Pamuk

Known as the ‘ship that never sailed’, Blackness is one of the rare castles in Edinburgh to be reminiscent of a ship, pointing towards the Firth of Forth.

Since it was erected in the 15th century, Blackness castle was a force to be reckoned with, acting as the first site for battle upon entering Edinburgh, before becoming a prison in the late 17th century.

Today, in contrast to its brutal past, the castle offers gorgeous views of the Scottish coastline, leading up into Fife.

It has also been the filming location for some scenes in the popular TV series Outlander as a replacement for the not so scenic Fort William.

How to Reach Blackness Castle ?

Both of these methods of transport take around 1 hour. 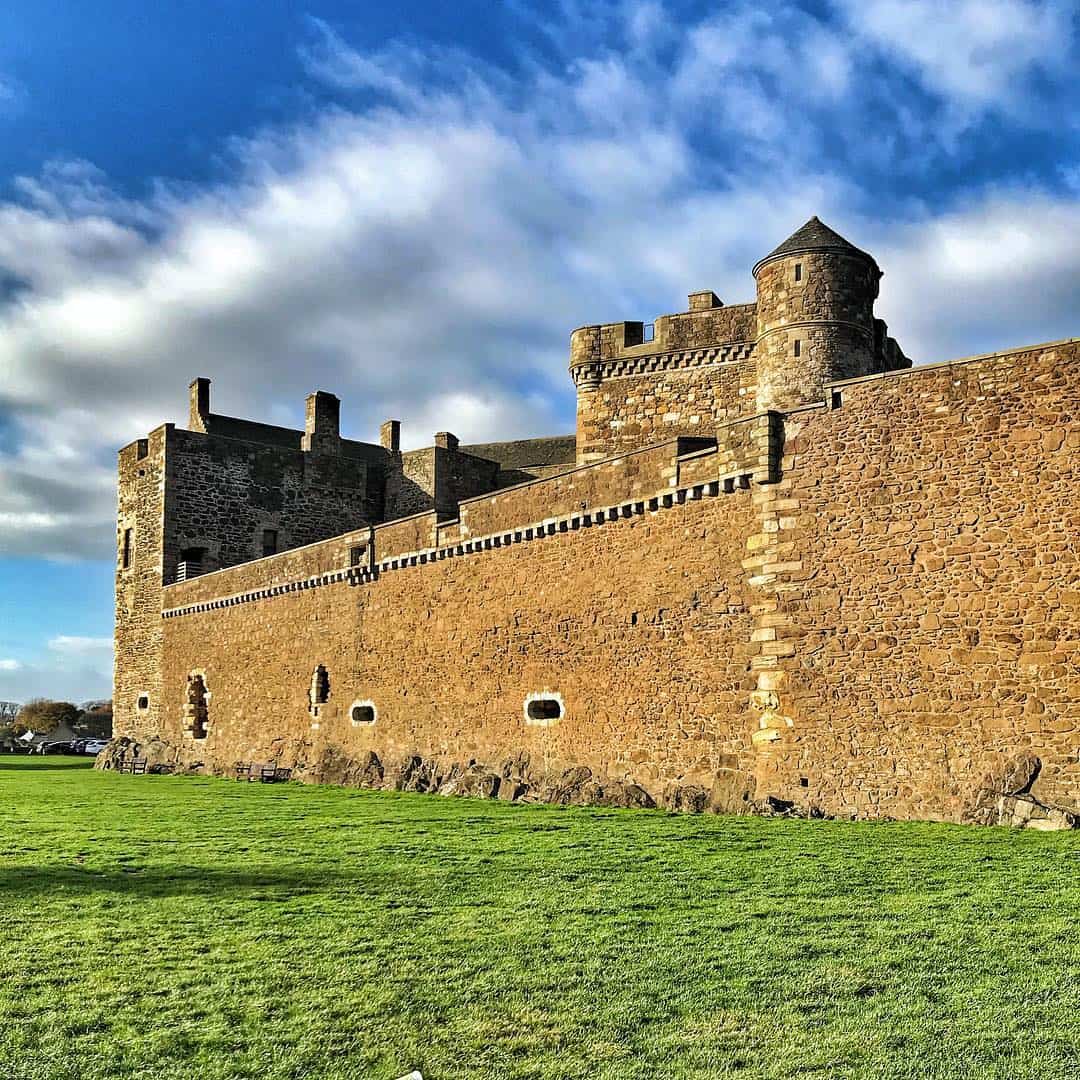 Blackness Castle is shaped in the form of a ship. Photography by Annette Norgen

Taking their name from the land itself, this castle was home to the Dundas family since the middle ages. The Dundas family built on the land in the 15th century, and later became owners of much of the East and West Lothian region.

The castle was then renovated in 1818to follow the Tudor-Gothic style, famous of the century in which it was built.  This was designed by architect William Burn, who is famous among Scots for his churches, and entrepreneur of the Scottish Baronial style which can be seen throughout the country; most noted of which is St. Johns church in the west end of Edinburgh.

Sadly, this renovation cost so much, the Dundas family were forced to sell their legacy to what is now Stewart-Clark family, having passed through several generations, yet still maintaining its structure from 1818.

This castle is one of the most well-known castles in Edinburgh for its unique architecture reminiscent of its time and is kept in such conditions.

Today, the castle is for hire, should you be looking for a fairytale wedding or a venue for a business event.

How to Reach Dundas Castle? 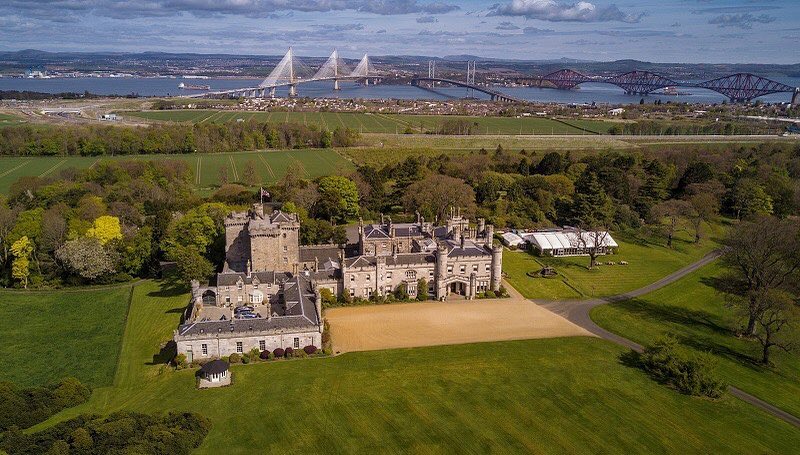 Dundas Castle is one of the most fascinating castles in Edinburgh. Photography by Lee Howard

What to Wear While Visiting Castles in Edinburgh?

Scotland is well known among locals for having 4 seasons in one day, so it is important to be prepared for all of them.

If traveling in the Summer, despite what some may say, it does get hot.

However, while it is exciting to put on a pair of shorts in the Northern Hemisphere, temperatures can change very fast.

When traveling around the castles in Edinburgh, take a rucksack with the following –

A Special Note on Weather Conditions in Edinburgh

Throughout the year, Scotland faces all kinds of weather conditions. As Edinburgh is on the coast, you can expect to experience high winds regularly, and in winter months, snow blizzards can spread across the country.

Before setting off on your enchanting adventure, ask your hotel or tour guide to call the castles in Edinburgh, as the weather can change very quickly. 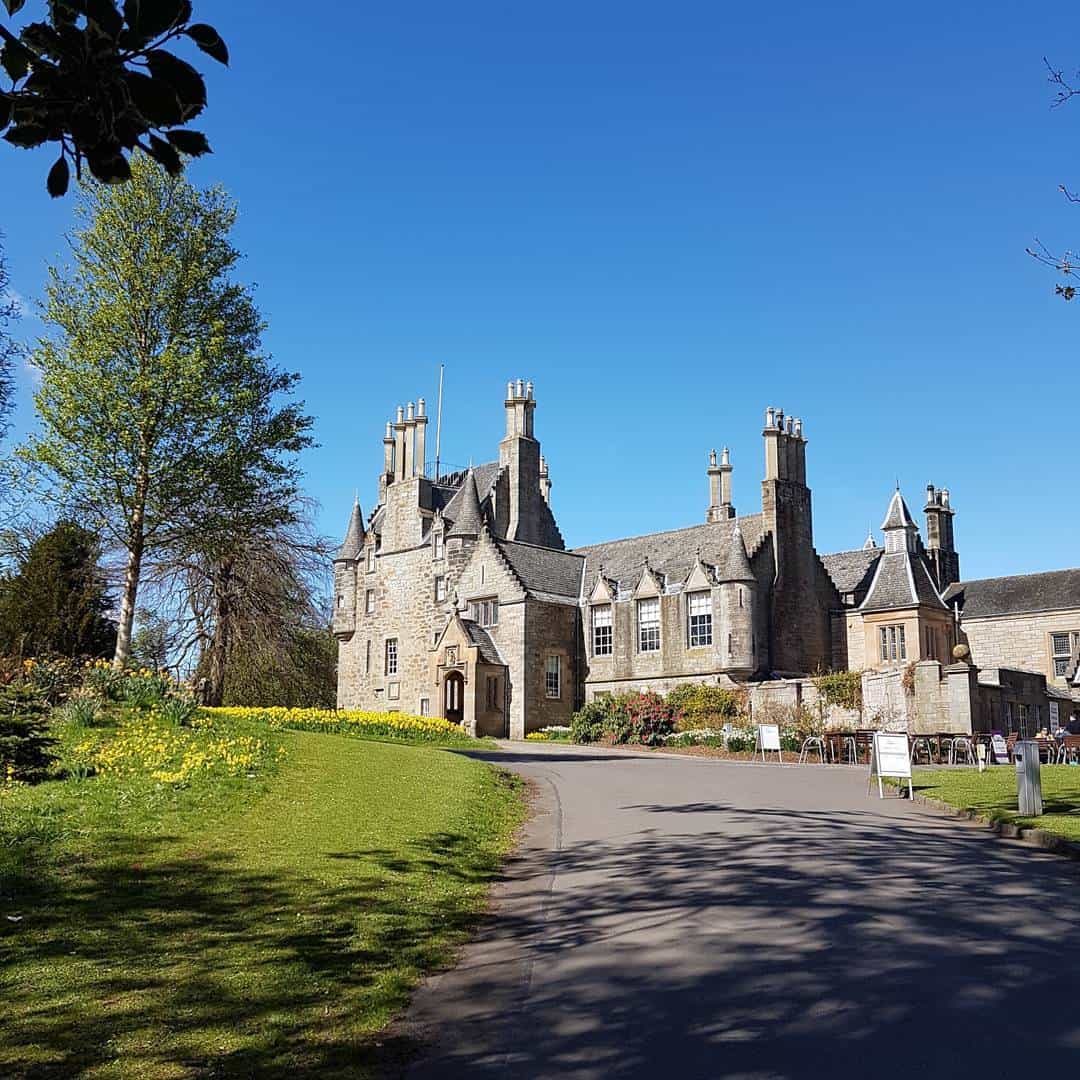 While visiting castles in Edinburgh, make sure to be prepared for fluctuating weather conditions. Photography by Brigitte Declere

Castles in Edinburgh and The Surrounding Areas

While most of the castles have affluent surroundings, it’s important to note that, as in any city, Edinburgh has some not so nice areas.

Overall, Scottish people are very warm-hearted people and theft is not very common but it’s important to be aware of the possibility.

As you would in any city, be aware of your belongings. 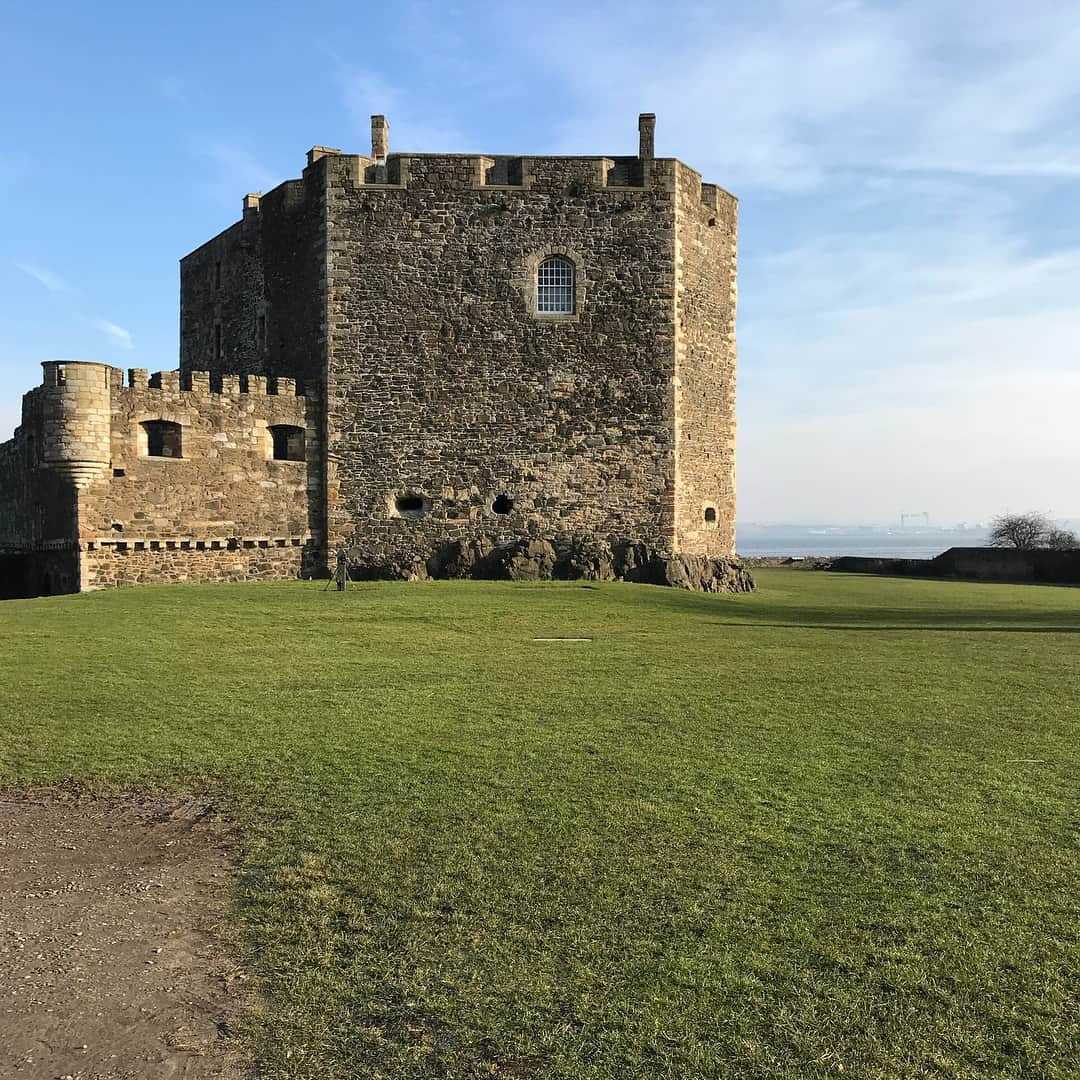 Visiting castles in Edinburg will be one of your best cultural trips ever. Photography by Eric James

Safety Around the Castles in Edinburgh

Scotland is extremely safe to travel around. There are security cameras on buses and the castles will always be populated with staff who can help you in any way possible.

The city itself is always populated with tourists and you are rarely far from a bar that has security, should it be late and you are feeling unsafe.

Overall, if history and beauty is what you are looking for when visiting Scotland, taking time to visit the castles in Edinburgh is just one of the many ways to step right into the intricacy of the city’s history and have a chance to see the peaceful, green countryside of Scotland.

Must Visit Locations in Europe

While in Europe, make sure to visit the place and feel experiences that you’ve never indulged in before. 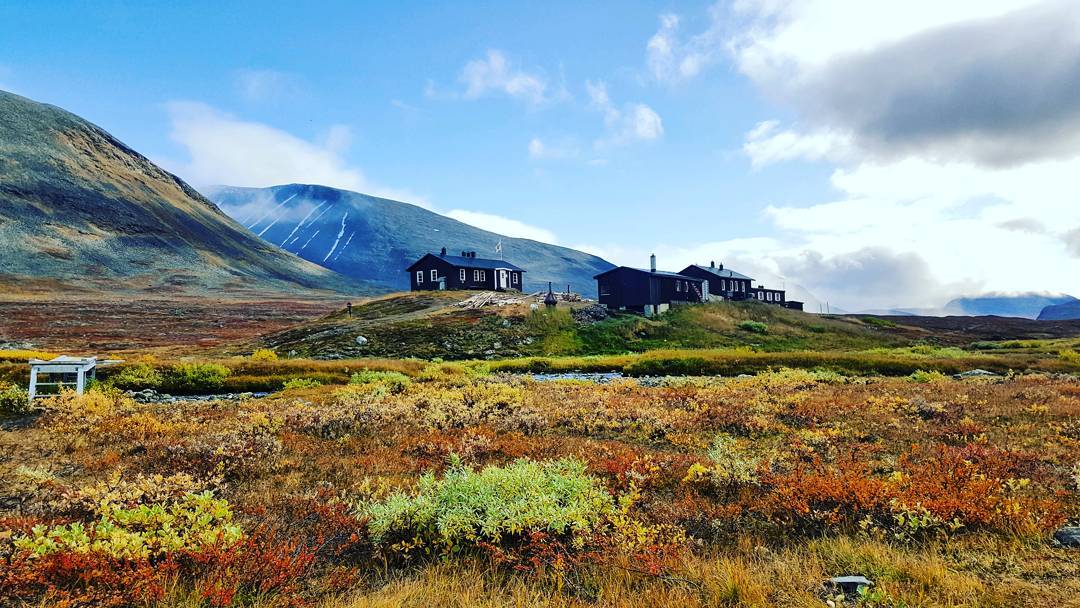 Europe has a lot of things in store for travelers. Plan any of the exotic locations of Europe and come back a changed individual. If you need any help with budget planning, we’re here to assist you. 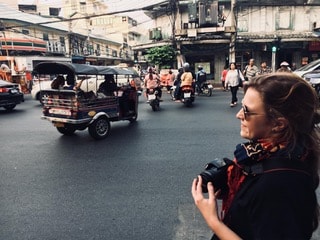 Eilidh Wilson is a copywriter and English teacher born and raised in Scotland. Currently based in Ho Chi Minh City, Vietnam; Eilidh travels regularly around Asia, loves to find great coffee shops, and take any opportunity to jump into the sea. Having studied Fine Art at University, Eilidh likes to try her best to maintain her art practice and dreams to one day live close to a print-making studio that she can afford to use. While doing all of these things, she tends to be dancing around the funk and disco, should you see her, you’re more than welcome to join in.